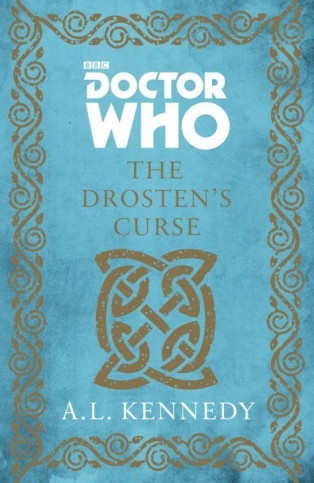 While I didn’t have a Doctor Who graphic novel in my TBR pile, it did seem like a golden opportunity to review a Doctor Who book. I’d been staring at the eARC of Doctor Who: The Drosten’s Curse, for a few days, so this gave me an excuse to get it. 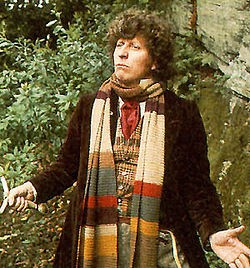 Why was I staring at it? Because this is a Fourth Doctor story. As the saying goes, you never forget your first Doctor, and Tom Baker was mine. Yes, I got a bit of the weepies when he appeared as The Curator at the end of The Day of the Doctor.

But the Doctor in The Drosten’s Curse was definitely the Doctor as I remember him from the series. Often surprisingly brave, and generally making it up as he went along. If the Fourth Doctor could be described as “madcap”, there was an awful lot of mad as well as curly hair under that “cap”, which was actually a rather floppy hat.

That particularly Doctor often seemed rather floppy, like an animated Raggedy Andy doll, right up until the point where he saved the day and skipped away to a new adventure.

The adventure in The Drosten’s Curse feels like one that could have happened during the run of the series, too. The Doctor lands the TARDIS somewhere he wasn’t planning on (as usual) and discovers that underneath the soil of an unsuspecting small town is a very large intergalactic predator who has changed the local landscape to suit his/her/its nefarious purposes.

What made this one fun is that the alien has been listening to humans for so long, that its purposes have strayed off course. It’s supposed to be a big bad monster who responds primarily to hatethink, but has been preserving the life of a lovely little old lady and making her happy by supplying her with fictitious grandchildren.

Of course, it is also living underneath a sand bunker on the local golf course, and eating anyone who wanders – or is lured – into the bunker.

In this adventure, the Doctor, currently between companions, enlists the help of a local young woman, Bryony, and an inept intergalactic bounty hunter named Putta. Bryony is as helpful as any companion has ever been, and has no trouble believing in not just one, but two aliens with space ships. She has always hoped that someone will rescue her from the humdrum of her life and take her away to see the universe in a classy ship and she hopes that this is her chance!

She gets way more than she bargained for. But Bryony’s life will never be dull again – if she survives both the incipient destruction of the earth and the Doctor’s desperate attempts to use her mind as a mental meeting place for himself, the alien, the TARDIS and that mother of all nightmares.

Escape Rating B: I think this story only makes sense if you are used to the wibbly-wobbly timey-wimey pseudo-logic that so often comes into play in Doctor Who.

The Doctor in this incarnation often gave off the appearance of a big, bumbling fool. Sometimes because he didn’t know what he was going to do until after he’d done it, and sometimes as a way of getting people and beings to underestimate him so he could get the better of them later. “Care for a jelly baby?”

At the same time, he does not suffer fools gladly, or any longer than he has to in order to give them their right proper comeuppance. The interesting thing in this story, and also many stories during this era, is that the evil in the end is not the monster – it’s the humans who try to take advantage of the monster.

There are a few plot bits that owe a lot to speculative fiction that has happened in the years since Tom Baker’s Doctor regenerated into Peter Davison’s Doctor.

The way to end the Drosten’s Curse was not superior firepower (it seldom was in Doctor Who) or even superior brainpower, which often did happen. In the Drosten’s Curse, the most powerful force in the universe turns out to be love, in ways that reminded this reader a bit of the end of Harry Potter.

Also, a significant part of the action in this story includes the TARDIS herself as a thinking being, even if she is not shown as an actual person the way that she was in the Eleventh Doctor episode The Doctor’s Wife. That the TARDIS has her own personality, her own mental space, and her own ability to feel emotion is a big part of what brings The Drosten’s Curse to its successful conclusion. I don’t think we saw the TARDIS act this much on her own before the revived series.

The timey-wimey bit comes at the end of this story, and it was quite touching, kind of in the same way that the end of Reaper Man in Terry Pratchett’s Discworld was touching.

All in all, The Drosten’s Curse is a lovely Fourth Doctor story that shows just how much substance lurked inside that frequently clownish buffoon.

August 15 is Doctor Who Day