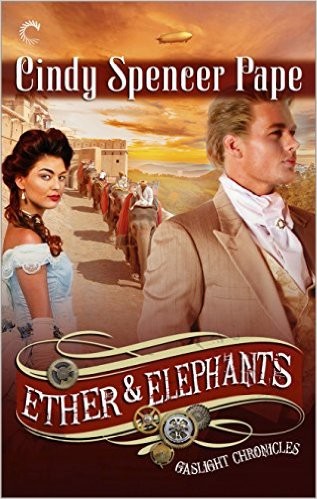 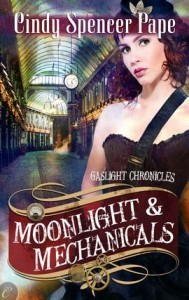 My favorite in the series is still Moonlight & Mechanicals (see review). It even made my Best Ebook Romances of 2012 list for Library Journal.

But Ether & Elephants brings the series to a very lovely conclusion – all the more so because it brings things full circle. The series both starts and ends with the adoption of a bunch of slightly misfit, seriously talented and definitely precocious children into a family that is expressly made to nurture all their varied talents.

A family headed by two adults who finally figure out that they love each other to pieces, and that nothing can, or should, stand in their way.

The journey for Sir Thomas Devere and Eleanor Hadrian is even rockier than the one in the first book – because Tom and Nell are two of the children who were adopted back then. They are all grown up now, and have loved each other forever.

And they’ve both given up hope.

Tom made a horrible mistake while he was at university. It’s not really that he gave in to temptation and fell into someone’s bed. While he may have known that he loved Eleanor, and may have guessed that she loved him, he was five or so years older and Eleanor was not yet an adult. There were no promises, no commitments – they hadn’t even talked about a possible future.

The problem was that the adventuress who seduced him claimed to be pregnant with his child, so he married her. She disappeared the morning after their wedding with the contents of his wallet and anything else in his room that seemed salable. He never saw her again, but he still feels bound to the marriage.

He also doesn’t seem to have done anything like a thorough job in investigating his runaway wife or her circumstances after the fact. A young nobleman with all the power of the Order of the Knights of the Round Table behind him should have done a much better job of tracking down the thief – or at least discovered that there was something fishy about that wedding, as there so obviously was.

Tom seems to have been too ashamed to take care of his own business, and now it may be too late. Not just because Eleanor has made a life for herself away from the family, or even that she may be engaged to another man. The problem at the root of everything is that she feels she can’t trust him.

But she needs his help. Well, she needs the Order’s help, and Tom is what she gets.

Nell has become a teacher, specifically a teacher of blind students. And one of her students has been kidnapped. This isn’t a simple rescue, because young Christopher appears to be “talented” in the way that the Knights are. He’s also not the only child, or more especially the only “talented” child, to be kidnapped in recent months. There’s also the ghost of a chance that Christopher might be Tom’s son. It’s certain that Christopher’s mother is, or was, Tom’s erstwhile wife.

In the investigation and chase to determine Christopher’s whereabouts, a number of long-buried truths come to light. They discover that Tom’s missing “wife” has been practicing the pregnant and disappearing bride scam at Oxford and Cambridge for at least ten years, meaning at least 5 years before she pulled the stunt on Tom. The inevitable conclusion is that Tom can’t possibly be married to her because she “married” so many other men first.

She’s also aimed her sights very high. All of the students she conned were rich and noble, including one well-heeled rake from Buckingham Palace. The Queen is worried there’s a little bastard princeling somewhere in the country.

And the Order’s old enemy, the Alchemist, seems to be taking these talented children to fuel a dastardly plot of his own.

Meanwhile, the chase moves to India, where Eleanor, with the Order’s help, is able to find the formerly young sailor who fathered her on a trip to England long ago. Only to find out that Nell is much better connected, at least in the Raj, than any of the Hadrians are back home.

But with all of their lives on the line, and with the certainty that Tom is now free, Nell can’t resist indulging in the passion that she has always felt for him. The question is whether passion is enough to overcome years of mistrust.

And whether they all come out of this mess alive.

Escape Rating B+: Ether & Elephants is a very nice wrap-up to the series as a whole. We first met Tom and Nell in Steam & Sorcery, when Sir Merrick Hadrian discovers Tom in the stews of London and realizes that Tom must be the son of one of his fellow Knights. That Tom will not leave behind the family that he has made and protected for years is just one more sign of his nobility, considering that Tom is all of 14 at the time.

But children grow up. Nell has always loved the young man who saved the lives of herself and her half-brother Piers, and hoped that Tom felt the same. Discovering that he did, but that he had pissed away their chance at happiness nearly broke her.

Eleanor Hadrian, like all of the family she has built, is made of stern stuff. She doesn’t just soldier on, but she finds a career that fulfills her, and makes a new life. When her new life intersects with the old one, she is the first person to volunteer to find her lost student, even knowing that she will have to deal with Tom and the ashes of their old relationship.

One of the ongoing themes of the story is that Nell doesn’t need anyone’s protection, not from the bad guys, and not from her own past. So many people have tried to be delicate about her feelings for Tom, and while she isn’t 100% sure those feelings are completely dead, she is utterly certain that she is tired of being treated like a delicate flower, because she so isn’t.

Bringing the story to India was a very nice touch. It allows Eleanor to discover and embrace the other half of her nature, and also answers the question that she has always wondered about – where do her supernatural talents come from? While I loved Eleanor’s ability to embrace her Indian family and heritage, it felt just a bit over-the-top that her father was effectively a prince. Eleanor has all the nobility she needs without inheriting it from her father along with her talent for seeing ghosts.

I liked her Indian family, and their participation in the final chase and capture is crucial, but her “Baba” didn’t have to be the social or political equal of Sir Merrick Hadrian to be effective, or to accept her as his daughter.

It gave the story an aftertaste of Eleanor’s needing to be a princess to be accepted as Lady Devere, when Tom, the Hadrians and especially Eleanor herself had all the nobility required.

I will miss the Hadrians and their magically steampunk world, but Ether & Elephants makes a fitting end to this lovely series.