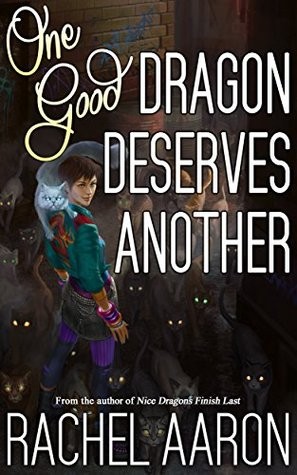 In the end, One Good Dragon Deserves Another was a compelling and completely wild ride. It builds up a bit slow, but once the story really kicks into gear, the fun never stops. One Good Dragon takes place a month after the end of Nice Dragons Finish Last (reviewed here). For our heroes, “nice dragon” Julius and his human mage friend and business partner Marci, that month is definitely the calm before the very big storm.

It’s the first time in his relatively short (for a dragon) life that Julius has felt successful, and it’s the first time he’s ever really been happy. It is necessary to read Nice Dragons Finish Last to understand just what a marvelous change this is for Julius.

He is happy because his family has left him completely alone. Not only is no one kicking him around (literally) and reminding him what a failure he is as a dragon at every turn, but he’s working, he’s reasonably competent at it, and Marci is his best friend. That he’s also in love with her is pretty much the icing on the cake. Even though he’s afraid to say or do anything to upset the balance of their friendship, he’s happy just being with her every day.

Then everything goes to hell in a handbasket, fought over by multiple psychopathic dragons, and Julius is caught right in the middle. He’s going to have to seriously “dragon up” in order to get himself and Marci out of the mess that his family has dropped them into, but he has to do it by being more of who he is, and not succumbing to who they are or who they expect him to be.

It’s a very tall order for the Heartstriker clan’s most undragonish dragon – but it is only by being himself that he might possibly save them from themselves – and save the world.

Escape Rating B+: This story starts out very small, and gets bigger (and wilder) as it goes along. I found the first third a bit slow going, but once Julius, and the reader, discover how big the stakes really are in this fight, I couldn’t flip pages fast enough.

Part of the slow start is that Julius and Marci are living a very quiet life, which we need to see in order to contrast it with what happens later. The other thing for this reader is that I found Julius’ family situation intolerable and hated every single of one of his relatives, especially his psychopathic mother.

Some of his siblings do reveal their true colors and become more tolerable, but mother never gets any better. And while I understand more of Bethesda’s motivations now than I did in the first book, she is still a whole lot of evil for evil’s sake, as well as arrogance for arrogance’s sake and a whole bunch of other nastiness thrown in.

While the plot of this story involves a clan war between the Three Sisters Dragons and Bethesda’s Heartstrikers, the core of the conflict is love gone very, very wrong, and all the way beyond hate. Estella of the Three Sisters is a dragon seer, and she wants to wipe out her former lover and only rival, Brohomir (usually called Bob) of the Heartstrikers. Estella is so far gone that she doesn’t care if she sacrifices her sisters to her obsession, and is perfectly willing to destroy the world to accomplish her goal.

That we see the world the dragons came from, and discover that Estella’s methods really can destroy the world explains a lot about dragons in general and Estella in particular. It’s also very sad and quite affecting.

The big theme of this story, through all the battles, all the setbacks and all the machinations, is that Julius needs to quit being ashamed and guilty about being a “nice dragon” and discover the true power of being willing to see the other side and reach out to other clans and simply negotiate with others in good faith instead of doing unto them before they even think of doing onto him.

That’s his mother’s way, and all it is has done is sacrifice too any of his brothers and sisters and bring the Heartstrikers to the brink of war – over and over and over. He has to stand up for himself, and those he calls friends, and even for the concept of friendship, in order for all of them to survive.

It’s damn hard and the way that he does it is pretty awesome.

But no good deed goes unpunished, and that punishment looks like the theme of the third book in this series, tentatively titled A Dragon of a Different Color. I can’t wait.