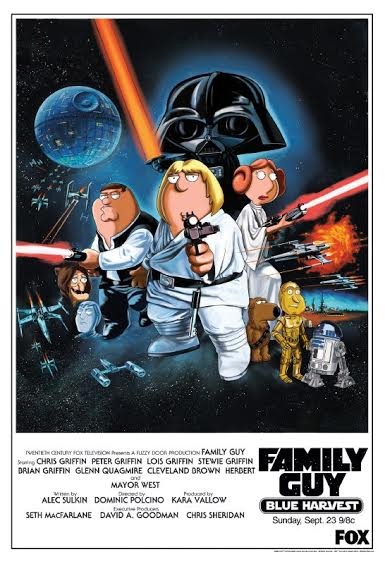 Star Wars: The Force Awakens is getting closer by the day, and excitement is growing everywhere. It's not just Star Wars fans, sci-fi nerds, and movie buffs who are amped up for the new release, either. Just about everyone can get into the idea of a Star Wars movie, and with J.J. Abrams's early trailers (#1 and #2) looking a lot more like the original trilogy than the much-shat-upon prequel saga, the material itself actually seems promising.

That said, with all the goofy fan theories, trailer parodies, and such flying around the Internet, it's been surprisingly easy to just have fun with the gradual build-up to The Force Awakens, as opposed to going crazy with anticipation. So in that same spirit, I decided to highlight the best and most hilarious Star Wars parodies to enjoy in the months leading up to the new film.

I have to start with Spaceballs, simply because it's probably the best known Star Wars parody out there—and it is a really funny one. Written and directed by Mel Brooks and featuring what now looks like a kind of throwback comedy cast of Bill Pullman, John Candy, Rick Moranis and Co., it's certainly the closest thing to an actual feature film designed entirely to mock Star Wars. The full film can be purchased here, and if you haven't seen it in a while, I'm betting you'll be surprised how much you enjoy its take on the classic movies. It's cheesy and predictable, but that's kind of the point.

Family Guy has a certain style of parody that one can find in just about every episode during cut-away sequences and the like. There's typically some kind of awkward pause, followed by dialogue that points out, whether dryly or gleefully, the stupidity of whatever source material is being mocked. That's basically the same way that Seth MacFarlane approached the Star Wars trilogy, only he did it with a surprising amount of detail over the course of three long episodes (get 'em here) paying tribute to the original Star Wars films. The thing that stands out with the Family Guy version is that it's oddly all-inclusive; this isn't a Family Guy episode that happens to joke about Star Wars so much as a full parody that covers more or less the whole plot.

Star Wars: A Clone Apart might be my personal favorite, and sadly it's probably the most obscure parody on this list. To summarize the concept, this is an episodic, ongoing Star Wars parody designed entirely through Star Wars: Battlefront video games. It's created by the folks at Illusive Entertainment, who use scenes and action from the games and dubbed over voice acting to make up shockingly engaging, cohesive, and hilarious narratives. Check it out.

Hardware Wars is dated, kind of horrible, and only 13 minutes long, but I have to give it some respect as the first known Star Wars parody, and one that still packs a few chuckles. Using household appliances as spaceships and droids, and replacing character names with meaningless sound-alike puns (Han Solo = Ham Salad), it's not exactly the cleverest parody out there. In some ways, it comes across like someone's final project for a comedy writing class. But again, it's got a few laughs, and for something tossed together in the '70s it could be worse. The whole thing is available for streaming.

For my money, these are the most worthwhile Star Wars parodies out there. There are plenty of additional examples, either of full-on parodies or of little bits and skits included in other films (such as the Millennium Falcon's appearance in The LEGO Movie, or South Park's infamous Jar Jar Binks knock-off, Joon-Joon the Jakovasaur). But the films and series listed above should do the trick for most Star Wars fans!