I finally got a chance to sample Batman: Murder at Wayne Manor, one of Quirk Books’ interactive mysteries that feature replica artifacts. It’s written by Duane Swierczynski, as was The Crimes of Dr. Watson, but as suits the main character, there are also comic-style illustrations by David Lapham.

The plot here seems the best integrated with the licensed property of the three books in the series. (Along with the Holmes one, there’s also Dracula’s Heir, by another author.) Bruce Wayne is having his lawn repaired after damaging it while digging out the Batcave. (This is all early in his career, which allows for self-questioning monologue not suitable for a more established hero.) A dead body is found, a young woman in a costume party mask who was Bruce’s father’s secretary until she disappeared. 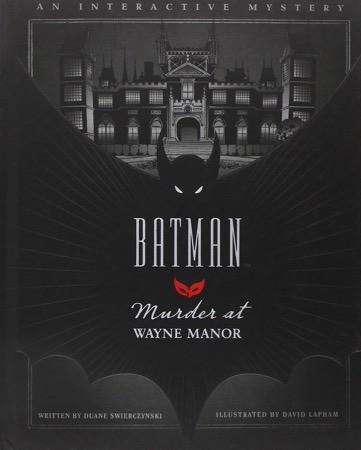 The artifacts are well-suited to this historical mystery: a party invitation, a photo of his parents, the autopsy report, a map of the estate, a journal entry, a newspaper, a letter, and DNA tests from the Bat-computer.

The main costumed villain is Black Mask, a character I don’t care for at all, because he’s just a thug in a suit. Thankfully, he doesn’t overwhelm the story.

Of course, delving back into a mystery connected to his father provides lots of opportunity for reflection on what happened to his parents and how it made him into the tortured Batman. I thought the material was handled well, with enough information for new (or less-familiar) readers and enough of a fresh take for those who’ve heard it all before. I actually appreciated the few glimpses into Bruce’s childhood.

Typical of the series, you can play along, since the solution pages are sealed behind a sticker. This was a fun take on a classic character that I was surprised to find demonstrated a new approach.