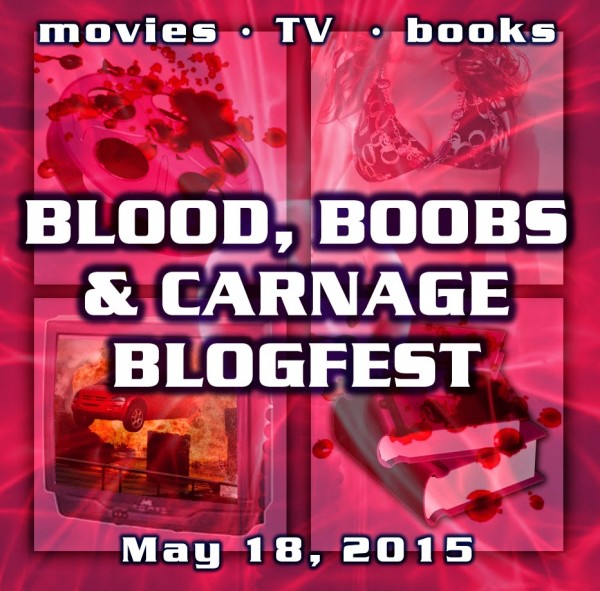 Let's go in order and start with a movie. I thought about going with a couple of classics like Heavy Metal or Elvira: Mistress of the Dark, but I'm sure there will be a dozen mentions of each today. I seriously considered Zombie Strippers, which stars none other than Jenna Jameson (in her first non-porn role) and Robert Englund (otherwise known as Freddy Krueger), but it's a bit too deliberate and self-titillating. Instead, I've gotta go back to the classics, back to the 80s, and tip my hat to scream queen legend Linnea Quigley. From Return of the Living Dead to Hollywood Chainsaw Hookers to Night of the Demons and beyond, she defined blood, boobs, and carnage for an entire generation. 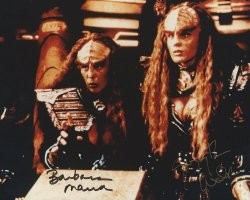 Television is a bit more difficult, but let's give it a shot. I could go the easy route with something like Xena, which had Xena and Gabriel, plenty of fake blood, and lots of cartoonish carnage, but (again) I suspect we'll be seeing the two of them all over the place today. Instead, I'm going to go with a show that might not immediately come to mind, and with an example that's likely not the one you're thinking of. Let's reach for the stars with Star Trek: The Next Generation, but skip right past Deanna Troi (the obvious choice) and go for Lursa and B'Etor, the Duras Sisters. Making their debut in season 4, they were rather infamous for their Klingon cleavage window, and were certainly responsible for threatening their fair share of carnage.

Finally, that brings us to books, my favorite of the three. The Wheel of Time immediately comes to mind, with the women of Ebou Dari decked out in cleavage-revealing dresses (which they use to provocatively frame the protruding hilt of their marriage knives), but that really only covers 1 of the 3 category. Lyka Bloom does all three well, but erotic horror seems a little too easy/obvious. So, instead, I will go with one of my favorite reads from last year - The Barrow by Mark Smylie. Along with Andy Remic's Iron Wolves saga, this is a book that marks a trend towards a darker, more mature sort of epic fantasy, one that reaches deep into the genre's pulp sword-and-sorcery roots, but which absolutely refuses to hold back on the sex and the violence. I know that explicitness (in both violence and vulgarity) turned off some readers, but I thought it was brilliant.


Okay, your turn - what are your Blood, Boobs, and Carnage picks?