Alan Dean Foster was born in New York City in the year 1946, but he was raised in California. He received a B.A. in Political Science in 1968, and a M.F.A. in Cinema from UCLA 1969. He worked as a copywriter for two years after graduation for a small advertising and public relations firm in Studio City, California. It was during this time that he wrote a lovecraftian letter and sent it into a bi-annual magazine called The Arkham Collector. Much to his surprise, the editor published it as a short story. Sales of short stories to other magazines soon followed. His first attempt at a novel, The Tar-Aiym Krang, was bought by Ballantine in 1972 and it incorporated several suggestions from science fiction editor John W. Campbell.

Imagine for a moment that George Lucas approached you to write the novel version of Star Wars: A New Hope in the early 70s. At the time, the movie was unknown. Your name would not be on the cover and the payment would be a mere $5000. Do you take the job as a ghostwriter for this unknown filmmaker? Two authors had said no. Alan Dean Foster said yes. And the rest, as they say, is history. When Star Wars became a hit and more novels were needed, Foster was the first to be called in to write them. His first spin-off novel of Star Wars with his own name on the cover was Splinter of the Minds Eye(1978). He has gone on to write countless Star Wars movie novels, including the pending Star Wars: The Force Awakens that will be released in late 2015. He has a story credit for the original Star Trek: The Motion Picture, many novels based on episodes of Star Trek: The Next Generation and he has also written ten novels for Star Trek the Animated series. Other movie tie-in books include the Alien movies, the Black Hole, and Starman. It is little wonder that Alan Dean Foster has won the 2008 Grand Master award from the International Association of Media Tie-In Writers. He continues to write and has well over 100 novels to his credit, both movie tie-ins and his own original series.

Currently, Foster lives in Arizona with his wife, but he enjoys traveling because it gives him opportunities to meet new people and explore new places and cultures.

“…Who would have suspected it? The Krang is both a weapon and a musical instrument.” – Alan Dean Foster, from The Tar-Aiym Krang

The Tar-Aiym Krang begins on the world of Moth, a planet with “wings”, two golden clouds of dust suspended in space around it. On this world many travelers come. Hardened space-sailors, merchant buccaneers and the insect race known as the Thranx are the targets of the young orphan boy Philip Lynx “Flinx” and his mini-dragon pet Pip, an empathic flying snake that shoots a corrosive and violent neurotoxic venom. Flinx has odd empathic talents that help him live as a thief on the streets of Moth. One day, he steals a starmap off a dead body that really didn’t need it any longer. Flinx thus starts an adventure that takes he through the reaches of space to a strange alien artifact on an abandoned world. 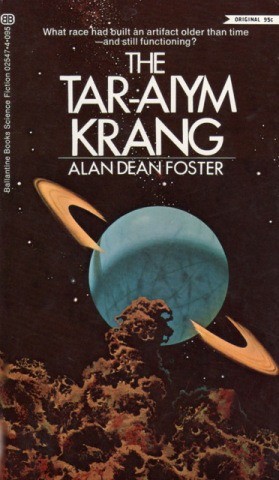 The first book I read by Alan Dean Foster wasSplinter of the Mind’s Eye. I was a huge Star Wars fan (still am) and anything I could read to further those adventures was like gold to me. Splinter came out two years before The Empire Strikes Back and doesn’t read as canon any longer, but at the time I loved it and it brought this author to my attention. When I spotted Foster’s first original novel The Tar-Aiym Krang, I found it to be a light-hearted space opera filled with dead ancient alien civilizations, uncharted worlds and majestic ruins and the search for an artifact that could threaten the galaxy. It is easy to see why the Flinx and Pip novels were very popular. I began reading more of the Humanx Commonwealth Series and they put a smile on my face.

The only problem I can see about the novel is that the female characters are not as well-developed as the male characters. They are little more than window dressing in the story. This was somewhat typical of the times when science fiction was geared toward adolescent boys instead of a wider adult audience. The book tends toward a YA level, but there are a few sexual situations that might make it considered to be more adult. Still, it is a well-paced book that is a fun read. If you are looking for a book to experience Alan Dean Foster as an original author, The Tar-Aiym Krang is a good place to start and then continue in your exploration. Don’t stop with the Humanx Commonwealth. Foster has several good original series including The Spellsinger Series and The Damned trilogy.