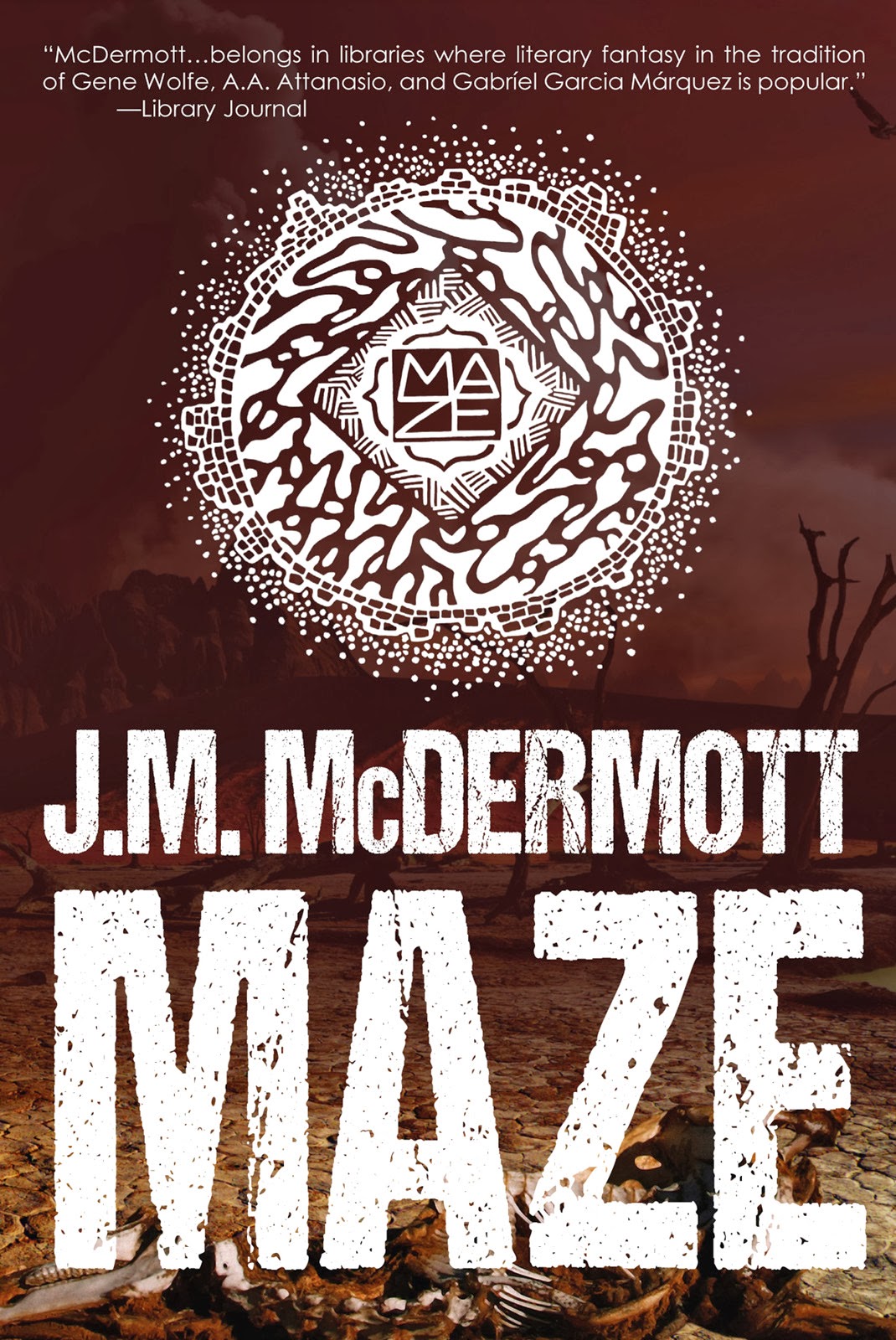 Normally, I would be cautious . . . hesitant, even . . . about any book described as a weird/dark fantasy novel. It just sounds either artistic or pretentious, conjuring memories of high school texts that were very literate indeed, but about as entertaining as a line at the license bureau. About the only reason I decided to give Maze a shot was that it came from Apex, and I've come to expect solid entertainment from them.

J.M. McDermott is to be commended for delivering on his rather ambitious concept. This is, first and foremost, the story of a maze . . . but it's also a tale of interwoven lives inside that maze. There is that of Maia, who remembers life aboard a space station, even if her daughter knows nothing but blood. There's Joseph, who returned home from his high school reunion to find something in the darkness. There is Wang, who sees a future that could have been. There's Julie, who knows nothing but a life inside the maze, and Lucius, the Neanderthal who loves her.

And then there's Jenny, the ghost, who just may be much more than that.

There is some very weird, very visceral horror surrounding these stories - the bug-like, plant-like, and beast-like monsters just scratch the surface. More than that, though, there's a palatable sense of hopelessness and dread to the maze and those who exist within it. It is neither a safe nor a happy place to be. For that matter, it's not a healthy place to be either, with the hopeless denizens surviving on blood, maggots, and even cannibalism. One character describes it as a sort of Bermuda Triangle that people stumble into it, but which is indifferent to them. What is it really? Why is there? What is its purpose? Well, we never really find out any of that, but that's not really the point.

To get back to that idea of being literate, this is a very well-written, carefully-crafted tale. It's structured just so, with a mother and daughter bookending not just the pages, but the ideas and lives within. The language is short and abrupt, taking unexpected turns on a regular basis, and often doubles back on itself to repeat words, phrases, and more. It reads like a maze, but that's not to say it's futile or frustrating. Reading is itself an experience, with the stories a part of that experience.

To be honest, I'm not sure if there's a great purpose or deeper message to the work, or whether this is just a story of survival against all odds. What I do know is that Maze makes for a fascinating read that may try a bit too hard, at times, to be literate, but which never forgets that it's higher purpose is to entertain.