Fantasy Review: Chasers of the Wind by Alexey Pehov 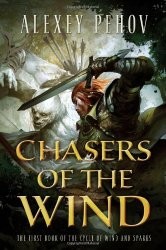 As fantasy epics go, Chasers of the Wind is an absolutely phenomenal story, populated by fantastic characters, with a stellar approach to magic (and necromancy) that hooked me hard and deep from the first page. There's no doubt that Alexey Pehov is a man of serious talents, with an imagination much like my own, but I'm afraid the story suffers a tad due to some issues with the framing.

Let me get the negatives out of the way first, because I really want to focus on what was so enjoyable about the tale. I'm not sure how much of the issues are inherent to Pehov's original narrative, and how much is a result of Elinor Huntington's translation, but there were three stumbling blocks for me. First, as might be expected with a translation, there are some awkward passages (particularly early on) that feel forced, as if Huntington was really reaching for an approximate translation. Second, the narrative is interspersed with bracketed clarifying notes (some of them quite long) that might have had some value as footnotes, but which break the flow of the story. I don't know if they were part of the original text or are something added for English readers, but they could have been handled better. Lastly, and this is the most jarring of all, the story inexplicably switches from a third-person narration to first-person narration whenever Gray is the focus - a switch that sometimes happens mid-scene, leaving you scrambling to figure out whether you missed a transition somewhere,

Now, with that out of the way, let's focus on the good stuff.

What immediately struck me about the story was the use of magic and necromancy. Pehov makes it central to the tale, not just standard fantasy window dressing, and he makes it significant. His Walkers and Embers are a powerful combination (I really liked their symbiotic sort of relationship), and their magic is the kind upon which the fate of entire empires can pivot. Similarly, the enemy necromancers are awesome in the depth and range of their magic, with the monsters they create truly terrifying. Their ambush/attack on the Gates of Six Towers to open the tale was one of the best opening battle sequences I have ever read. If you can imagine how draining it must be to fight for your life against undead creatures that feel no pain, imagine having to do it all over again with the monsters who used to be your comrades.

Pehov populates his late with some great characters as well, particularly the soldiering team of Luk and Ga-Nor. Although the two have an awkward sort of camaraderie that lends the tale much of its humor, they're also solid, admirable heroes in their own right. I was actually quite surprised at how often Luk managed to not only hold his ground, but actually distinguish himself against the far more experienced warrior. Similarly, the team of Gray and Layen is a welcome sort of pairing for an epic fantasy, being a happily married husband and wife, one of whom happens to have access to Walker magic, and the other of which is an expert assassin. Their relationship isn't key to the story, and Pehov doesn't milk it for dramatic effect, it's just a part of who they are.

Having brought up Gary, I must say a few words about the assassins of Chasers of the Wind. This is another element, like that of the necromancers, where Pehov really manages to do something fresh and original with the genre. His assassins are an interesting society, with assassins who range from surgical sort of precision strikes to overwhelming brutality. The flashback scene in which we learn why Gray and Layen are on the run, and see how Gray's biggest job was accomplished, is exceptionally well done.

Plot-wise, this is very clearly the opening stanza in a much longer tale, so there's not a lot of story arc or complex resolution here. Much of the story consists of battles, chases, rescues, and confrontations. It's a very fast-moving tale, with the exception of a lull in the middle, that absolutely races to a conclusion. It's big, it's epic, and it's honestly awe-inspiring in places. If you find the opening narration at all awkward, like I did, stick with it and trust that the story and the characters will carry you through . . . because they absolutely do.