1 Vote
Disclaimer: I received an ARC of this title from the publisher in exchange for review consideration. While I make every attempt to avoid spoilers, please be aware that an ARC synopsis, press release, or review request often include details that are not revealed in the published cover blurb. 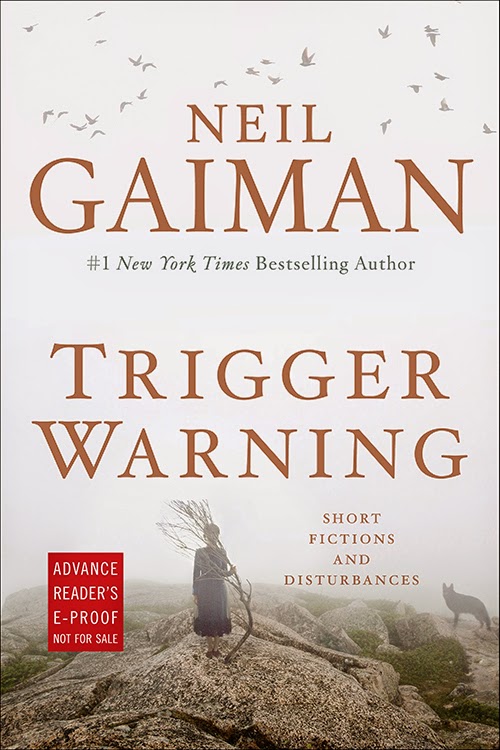 With his third collection of short fiction, Neil Gaiman presents us with stories, verse, and even a 50th anniversary Doctor Who story, all previously published (please note that Black Dog, the one story exclusive to the collection, was not included in the ARC).

Having only read him in novel or graphic novel form, Trigger Warning: Short Fictions and Disturbances was my first introduction to Gaiman's short fiction. It was an interesting read, largely entertaining, and even if there was a long, deep stretch of works in the middle that just didn't grab my attention, there were more than enough strong entries to book-end that gap.

Rather than review every tale in the collection, I thought I'd just offer my observations on those that worked best for me:

The Thing About Cassandra was most definitely an early highlight, and even if I saw the twist coming a few pages early, it was still a great story.

Down to a Sunless Sea was one of the shorter tales here, but powerful in the depths of its sorrow. The Truth Is a Cave in the Black Mountains . . . was absolutely fantastic, with the stunning image of a girl perhaps too-tightly bound by her ponytail, and marked by the cleverness of a promise. Adventure Story was too short, but unexpectedly comic, while Orange was odd, oddly told, and oddly compelling.

Click-­Clack the Rattlebag was really just a tease, ending just as we get to the meat of it, but I quite liked the monstrous concepts of the Click-Clack and the Rattlebag. An Invocation of Incuriosity was a great story within a story, full of myth and fable, while “And Weep, Like Alexander” was a fun story about un-inventing and the unintended consequences of progress. Nothing O’Clock, the Doctor Who story, was one of my favorites, taking as its inspiration the simple question of "What time is it, Mr. Wolf?" and making of it something perfectly creepy, properly Who-amusing, and entirely unsettling in its resolution.

Pearls: A Fairy Tale was just that - a faery tale - but a contemporary one of drugs, dogs, hookers, stepmothers, and magic, that I quite enjoyed. Kether to Malkuth and The Sleeper and the Spindle both continued the classic faery tale theme, but in a more familiar setting . . . even if Gaiman puts a few unexpected twists on the traditional tropes.

Introductions are always a tricky thing when it comes to a collection, and you wonder/worry about how much the author might give away, but I think it fits here as an intro (rather than an appendix). Gaiman really sets the stage for each tale, telling us less about them and more about how they came about. They allowed me to appreciate some stories (such as A Calendar of Tales), even if I didn't enjoy them, and really served to expose his inspirations. All in all, Trigger Warning: Short Fictions and Disturbances is a solid collection, despite the dry spot in the center, and perfect for those of who don't follow his short fiction obsessively.