Please welcome Craig Cormick to The Qwillery. The Shadow Master is out today in print in North America and eBook from Angry Robot Books. Please join The Qwillery in wishing Craig a Happy Publication Day! 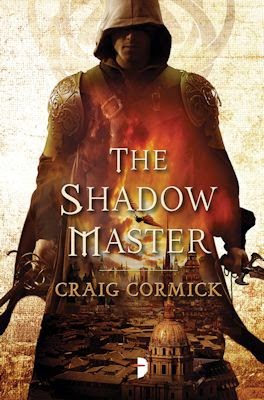 The Qwillery asked Craig to answer the following questions about his latest novel, The Shadow Master, and he graciously obliged us:

2) The Shadow Master includes the theme of star-crossed lovers. What in your opinion is appealing about this theme that we see in so many stories in many different genres?

Okay, so first a quick description of my new book The Shadow Master: It’s a kick-arse tale of alternative history, love and conflict, madness and magic, with sword fights and mad clerics and assassins and bombs and magical shape-changers and dark catacombs and tall towers and an army of plague people – with everything except a car chase. And through it all is this mysterious figure, the Shadow Master, who is manipulating everyone towards his own ends.

Sound interesting? I sure hope so. (my mum thinks it does!)

The idea jumped into my head when I was walking around the Galileo Museum in Florence, Italy, where I lucky enough to be for a science communication conference (my day job) and looking at all the inventions there I got this sudden idea - what if science behaved like magic? I mean, what if, when Galileo invented the telescope, it actually transported you across to what you were looking at? And what if the early chronometers actually slowed down time? And what if when you strapped on Leonardo da Vinci’s flying harness you actually transformed into a giant bird?

So I turned Florence into the Walled City of my book, and I went and studied up a lot on the history of the city and found out more about the Medici family and so, yes, I’ve used a lot of historical figures in the book – but I think that adds to it. If everyone were fictitious it wouldn’t have that taste of reality that makes alternate history satisfying.

And that brings me to the second question – the star-crossed lovers.

I love using folk tale motifs and so on in my work and wanted to do something similar in the Shadow Master. In my research I’d come across an 18th Century Italian novel the Betrothed, written by Alessandro Manzoni in 1827. It is set in 1628 and tells of the plague years and the politics and church of the time – and has two young lovers – Lorenzo and Lucia. And they are the characters in my story.

A few commentators have presumed they are based on Romeo and Juliet – but it just goes to show there are many strong traditions of star-crossed lovers and they keep emerging throughout literature. Though it says something of Shakespeare’s impact that his is the one that has become the touchstone for stories of young unrequited love.

Shakespeare in fact based almost all his plays on existing plots and stories, but he was able to bring them to life with more depth and character and stunning use of language that has made them seem like the original stories. Check out Luigi da Porto’s Giulietta e Romeo for example. (https://archive.org/details/giuliettaeromeo00clizgoog)

Shakespeare’s R+J is believed to have been based on the Palace of Pleasure, which was a collection of Italian tales translated by the Englishman William Painter in 1567, about 20 years before R+J was written. In the collection is the tale: ’The goodly History of the true and constant love of Romeo and Juliett’.

And prior to that there was also an English translation of the early 16th Century Italian tale Giulietta e Romeo, by Arthur Brook in 1562.

We can go back further still, to the 15th Century, when the story was ‘Mariotto and Gianozza’. And we can keep going back to the tale of ‘Pyramus and Thisbe’, from Ovid’s Metamorphoses, written about the year 0.

So clearly there is something in the star-crossed lovers theme that appeals to us, as it keeps emerging over and over again (don’t forget West Side Story, Gnomeo and Juliet and the zombie romance Warm Bodies etc.). Personally I think we are more interested in the chase or the journey than we are in the final destination. Think of the sexual tension in Lois and Clark that just fizzled and disappeared as soon as he got the gal (or she got the superman).

And I think our own real life experiences show that the imagination for what might be – romantically and sensually – is much more powerful than reality often is. Yet, on the other hand, I’m sure we’ve all had experiences too, when a romantic occasion suddenly transformed into something quite magical.

And that’s my answer to those that ask me about the magic in the book – magic can exist if you are willing to see things as magical. 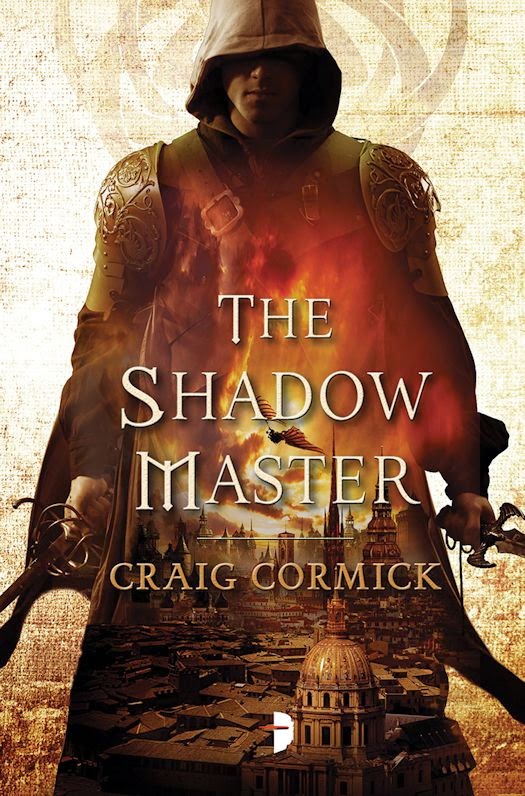 In a land riven with plague, in the infamous Walled City, two families vie for control – the Medicis with their genius inventor Leonardo; the Lorraines with Galileo, the most brilliant alchemist of his generation.

And when two star-crossed lovers, one from either house, threaten the status quo, a third, shadowy power – one that forever seems a step ahead of all of the familial warring – plots and schemes, and bides its time, ready for the moment to attack… 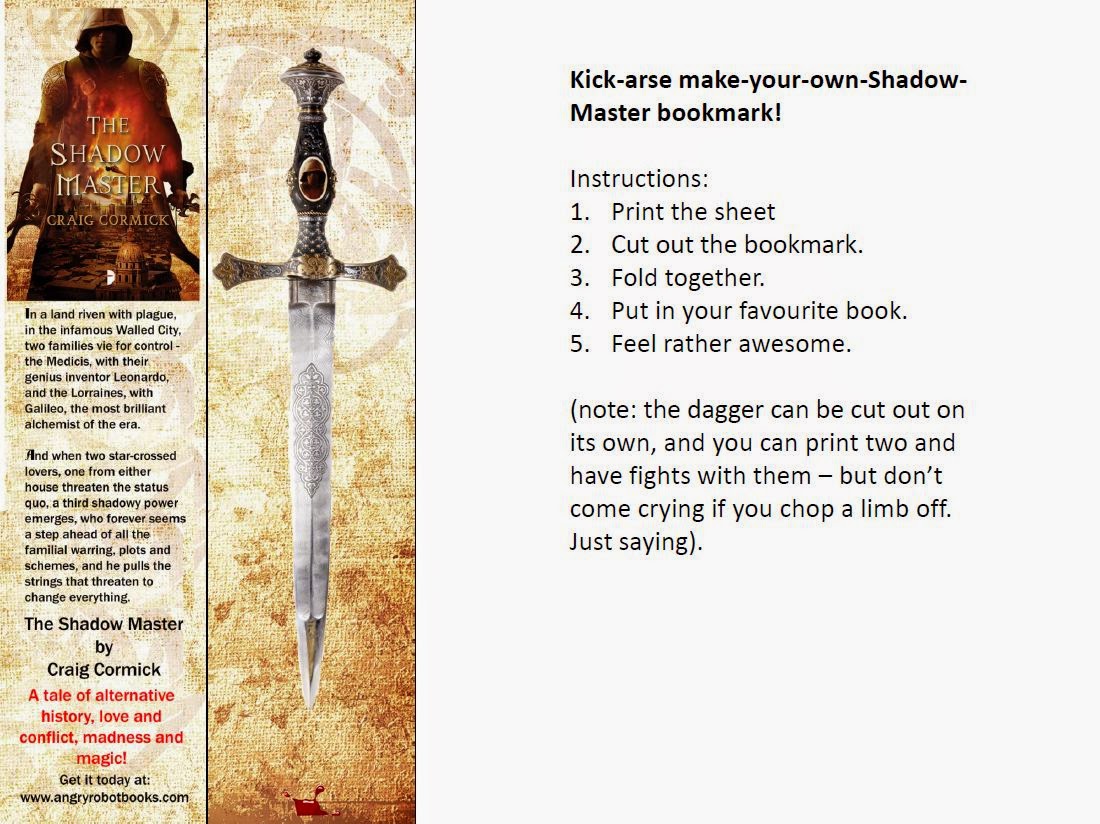 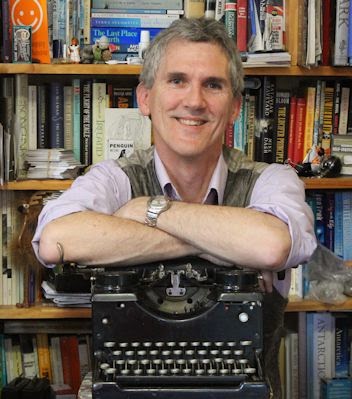 Craig Cormick is an award-winning author and science communicator who works for Australia’s premier science institution, the Commonwealth Science and Industrial Research Organisation (CSIRO). He is a regular speaker at science communication conferences and has appeared on television, radio, online and in print media.

As an author he has published over a dozen works of fiction and non-fiction and over 100 short stories. His awards include an ACT Book of the Year Award and a Queensland Premier’s Literary Award.

What:  One entrant will win a Mass Market Paperback copy of The Shadow Master by Craig Cormick from The Qwillery.

Who and When:  The contest is open to all humans on the planet earth with a mailing address. Contest ends at 11:59PM US Eastern Time on July 3, 2014. Void where prohibited by law. No purchase necessary. You must be 18 years old or older to enter.

*Giveaway rules and duration are subject to change without any notice.*

Book blogger/reviewer and owner of The Qwillery, which focuses on Speculative Fiction (broadly defined).