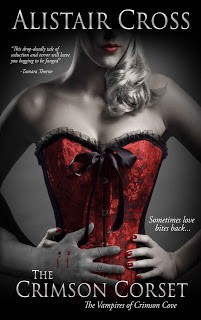 Falling somewhere between paranormal romance and vintage horror, The Crimson Corset is a tale of small towns, family ties, and vampires. Alistair Cross puts just enough of a spin on vampire mythology to distinguish his tale from the competition, and tells it with a slow-burning, subtle sort of flair that really pays off in the end.

Reading the first few chapters of this, I was reminded of my introduction to the world of Twin Peaks so long ago. Crimson Cove is a quaint, but curious, little town on the coast of California, marked by more than a few eccentric locals and one fish-out-of-water new arrival. First, we're introduced to a pair of brothers - a writer who talks to his dead mother's fern, and a mechanic with a health food obsession - along with the crazy psycho ex-girlfriend stalker of the latter. Next, we meet the town sheriff, who is secretly addicted to romance novels, and just as secretly in love with the town mortician. Not long after, we meet a pair of bickering shop owners, one an incense-loving psychic who runs a bookstore, and the other a bow-tie wearing grumpy old man who sells unicorns and crystal balls. I could go on, but you get the point - we've already got one hell of a fascinating small town story going on the 50 pages, and we haven't even touch on the vampires yet.

As for those vampires, there are two camps in town. The Eudemonia health spa, nestled deep in the woods, is home to Michael and his coven of 'good' vampires. They're a friendly, protective bunch who feed rather delicately upon the yoga-loving health nuts who frequent the spa. The Crimson Corset, across town, is home to Gretchen and her coven of 'bad-ass' vampires. They're a rough and tumble sort who are almost as addicted to violence as they are to the poison in their leader's blood. There's no shortage of eccentricity among the vampires either, especially in how they continue to fulfill the roles they once served in life, whether it be caring for abandoned tigers, putting on nightly magic shows, or playing mad scientist. There's been a long-simmering feud going on between them for centuries, but it's all about to come to a head with the arrival of Cade, the brother who talks to his death mother's fern, and who just happens to be the near-mythological 'sire' that vampires have been looking for.

It sounds like there's a lot going on, and there is, but Cross handles all the characters and plot lines with a deft touch. It's a slow moving story, content to draw the reader in and make us feel a part of the crazy little town, but when the conflict comes to a head . . . well, Cross also knows how to write a final story arc that delivers on just about every level. What's more, in Gretchen he has created one of the most innovative, original, compelling vampire villains I've come across in a long time. The sheer inventiveness of her corset alone - it's boning posthumously donated by the mother she murdered - is brilliant. She's cruel, sadistic, seductive, and oh-so-very clever. She's one of those characters you love to hate, but more importantly she's a worthy foe for the combined forces of the brothers, the sheriff, and the vampires across town.

Part mystery, part horror, and part small-town drama, The Crimson Corset is one of those rare novels that manages to succeed across the board.