Interview with Emma Shortt, Author of Waking Up Dead 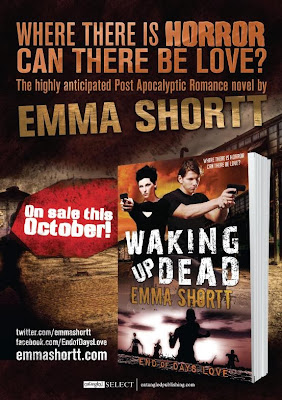 Please welcome Emma Shortt to the virtual offices this morning! She dropped by to chat about her zombie romance Waking Up Dead.

[Manga Maniac Cafe] Describe yourself in 140 characters or less.

[Emma Shortt] Right now I’m typing away in an oversize Firefly tee shirt, and my huge spectacles. At some point today I might actually get dressed *lies*.

[Manga Maniac Cafe] Can you tell us a little about Waking Up Dead?

[Emma Shortt] Waking up Dead is a book that explores the following question: where there is horror can there be love? The horror comes from the zombies, and the love blossoms between my heroine (Jackson) and my hero (Luke).

I’m a huge horror fan and I devour romance, so in my mind it made sense to combine the two. Plus, it was a book that I wanted to read, if that makes sense, and I looked for it everywhere but couldn’t find it, so I wrote it instead.

[Manga Maniac Cafe] How did you come up with the concept and the characters for the story?

[Emma Shortt] It just came to me. All my books arrive in my mind pretty much fully formed. I don’t plan them or anything. With Waking up Dead I knew immediately that it would have to be zombies. I have a very weird relationship with zombies. I both loathe and love them.

Once the zombies were there Jackson arrived, then Luke, then all my other characters, and before I knew it I was typing away.

The thing about this story is that it came out exactly how I imagined it to be. Not all my books do, sometimes I feel the final product does not match the story I had envisioned and I can’t work out why. But with WD? As soon as it was finished it felt right.

[Manga Maniac Cafe] If Luke had a theme song, what would it be?

[Emma Shortt] Oh, lemme think about this, maybe Give a Little Love by The Mostar Diving Club. Luke is definitely the more considerate and easy going of the two. He rarely doubts that they will be okay, that they’ll find safety and a life together. More than that though, he recognizes his feelings for Jackson in the very early days of their relationship. He does not hold back. Jackson, I’m afraid, does.

[Manga Maniac Cafe] Name one thing Jackson is never without.

[Emma Shortt] Mandy-the-machete. I don’t actually tell Mandy’s story in Waking up Dead, but Jackson found her in the first hour or so of the zombie invasion. Two years later and Jackson still has her. In a way Mandy is very much a symbol of Jackson’s survival over the years. She’s battered and bruised and her blade is covered in nicks, but she still does what she needs to do. Just like Jack.

[Manga Maniac Cafe] What three things will you never find on Luke’s pocket?

[Emma Shortt] In the world of the dead you don’t carry things around in your pockets, you don’t carry much at all if you can get away with it. There are two reasons for this. 1, things can jingle and clang alerting the zombies to your presence. 2, if you have to run – as you so often do – you can’t risk losing important things. So Luke’s pockets are pretty much empty ?.

[Emma Shortt] Jackson is not a girl who dwells on regrets. She can’t be. When your entire existence is based around avoiding things that want to eat you it doesn’t leave much time for brooding. I think this is an important point, because just imagine if you really were spending every moment of every day avoiding zombies, worse, clever zombies. You would have to be on your guard all the time! There’s no relaxing, no letting your defenses down at all. Jackson has survived for so long because she adopted this tactic. She does what needs to be done, and once it is done she does not think about it.

That being said, the loss of her brothers was something that very much shaped my heroine.

The Jackson we see in Waking up Dead is very different from the Jackson of two years ago. Pre-zombies she was the younger sister of two overbearing brothers, she lost them both to the zombies, and it was that incident more than anything which set her on the path she has walked for the past two years.

[Manga Maniac Cafe] What are your greatest creative influences?

[Emma Shortt] I read an awful lot. No, that’s not right, I read a ridiculous amount, sometimes as much as twenty books a month. I like to immerse myself in the brilliance of other authors because it inspires me to work harder on my own writing. I also read in pretty much every genre. I love romance, horror, sci-fi, crime, thrillers – all of it. I’m sure in some way they all influence my work. Like Waking up Dead, in some ways I think of it as a homage to every zombie book I’ve ever read mashed in with every romance. Kind of like a pick and mix of everything I ever liked.

If I had the choice of being a writer or a reader – pick one only! – I would pick reader every time.

[Manga Maniac Cafe] What three things do you need in order to write?

Quiet. I hate music or distractions around me, which is why I tend to do most of my work in the early hours of the morning.

My family. Because they’re my cheerleaders, and when I get bad reviews or my word count is low they don’t care. I’m still just Emma to them.

[Manga Maniac Cafe] What was your biggest distraction while working on Waking Up Dead?

[Emma Shortt] As I mentioned earlier I have a very weird relationship with zombies. I know, I know! That sentence is weird…because zombies don’t exist! However, when I was very, very small I watched a number of zombie movies, Day of the Dead, Dawn of the Dead and so on and they terrified me for life. I have a total phobia of zombies. Like Jackson I have my machete, and I have plans in place in case of zombie invasion (yes really).

So add that in with my preferred writing time and you can see why I found some parts of the writing process difficult. I’d be sat there, typing away, something creaks…

[Manga Maniac Cafe] What is the last book that you read that knocked your socks off?

[Emma Shortt] I recently read Gone Girl. It had rave reviews but I was holding off because my book budget has taken a kicking lately. However I found it in a charity shop for less than a pound and sat down to read it on the same day. I thoroughly enjoyed it and found the writer’s style to be very appealing. I’ve read since that a number of people were disappointed with the ending, but for me it really worked. At its heart the book explored that crazy addiction people can have between them, the idea that someone can bring out both the very best and the very worst in you. I like that idea because I am always interested in how different people can pull different reactions from me. We all like to think we have a set personality, and in some ways we do, but I think aspects of it are changeable depending on the people we spend time with. So with my girls I am much sillier and relaxed, whilst with my husband I am devoted and loving, and yet with friends I am a different way entirely. Different personality aspects depending on the situation, and a really interesting question is which would you stick with if you could only pick one…

[Manga Maniac Cafe] If you had to pick one book that turned you on to reading, which would it be?

[Emma Shortt] The Lake at the End of the World by Caroline MacDonald. I read this when I was about eight or nine and it was everything a book should be. It’s post-apocalyptic and tells the story of the last girl on Earth…only she’s not. It was brilliantly done, with references to Plato’s The Republic that I did not pick up on until I read it when I was much older.

[Manga Maniac Cafe] What do you like to do when you aren’t writing?

[Emma Shortt] Read! Reading is my main hobby, followed by running. Oh and eating, which explains the running, I LOVE food and the only way to not turn into Jabba the Hut is to run a lot. I also like to watch sci-fi shows (Star Trek, Firefly, Stargate, BSG) and go to conventions. So if you see a woman wandering round, dressed as Captain Janeway, with two teenagers dressed as Miku Hatsune and Daenerys Targaryen that would be me.

[Manga Maniac Cafe] How can readers connect with you?

[Emma Shortt] My website is www.emmashortt.com and you can sign up to my newsletter there. I’m also on Facebook www.facebook.com/AuthorEmmaShortt and twitter www.twitter.com/emmashortt. I really love to hear from readers, so don’t be shy!

You know your life has hit rock bottom when you’re living off cooked rats and showering once every few months—if you’re lucky. But for Jackson Hart things are about to get a whole lot worse. When her best friend, Tye, disappears hunting for food, kick-ass Jackson’s ‘head south to safety’ plan looks like it’s dead before it’s even begun. But then she meets ex-mechanic Luke Granger, who takes her to his bunker, feeds her with non-rat based food, and offers her protection against the zombie hordes—not that she needs it. She knows how to use a machete and isn’t afraid to.

Jackson might have been tempted to stay in the city with her rescuer. Food, shampoo and the possibility of finally getting laid, what more could she ask for? But the flesh eaters are getting smarter and when the bunker is compromised, Jackson and Luke have no choice but to make the journey south.

Luke and Jackson team up to find other humans in a road-trip romance for the ages. Travelling for thousands of miles with zombies shadowing their every move they must utilize every resource at their disposal…and then some. On the way, they discover that even if flesh eating zombies are knocking down their door, there’s always time for sex and maybe even for love.