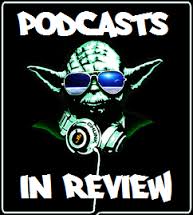 Here is this week’s Podcasts in Review.

Coffee with Kenobi: Rebels Reactions with Vanessa Marshall is a great interview diving deep into the character of Hera Syndulla (without any spoilers of course). Vanessa talks about Star Wars Rebels, the films and fandom.

Full of Sith: Episode LXVII features hosts Mike, Bryan and special host Amy Ratcliffe who fills in for Bobby this week. They talk about the Force for Change contest and video and some Episode VII rumors. Later in the show, Craig Dickinson joins them for more Star Wars in the classroom as his students finish up The Phantom Menace, knock out Attack of the Clones and move into Revenge of the Sith. What questions did the kids ask? What elements surprised them? Tune in to find out. It’s actually a pretty fun feature of the recent shows.

Geek Out Loud: Episode 89 is co-hosted by Teresa Delgado and features a great conversation with her and Steve recapping Star Wars Weekends and the RebelForce meetup. Afterwards they cover listener questions regarding Padme losing the will to live, why Return of the Jedi is the best film, and off the wall topics like Steve Glosson bobble head merchandise. They talk Disney, they talk movies, even Teresa’s husband Greg shows up. All in all, it’s a great show full of fun Star Wars conversation with two excellent Star Wars fans. Steve and Teresa are a winning combination as podcast hosts. Even though they had some technical difficulties in this show, I’d still mark them as the pick of the week in regards to Star Wars podcasts.

Jedi Journals: June 2014 Episode is definitely worth checking out. As usual, they cover book and comic news, recent releases, and upcoming releases. They also have special guests Erich and Joe from Star Wars Books on for just about the whole show. They do a reading from The Empire Striketh Back, talk about upcoming con events, and reveal some awesome news. At San Diego Comic Con the Del Rey booth will be giving away a special advance copy of John Jackson Miller’s A New Dawn with a variant Doug Wheatley cover and snippets from the other upcoming adult Star Wars novels in the back. If you’re heading to SDCC, this is a chance to get a full copy of A New Dawn months in advance of everyone else for free. Hearing Joe’s voice, I also finally make the connection to who Johnny Star Wars is. Plus I learned that OfficialPix has limited signed hardcover copies of Warwick Davis’ autobiography Size Matters Not. Pretty good deal for a signed hardcover. Overall, great episode to check out.

RebelForce Radio: Episode 6.6.14 covers the news of the two newly announced Star Wars Episode VII actresses and the TMZ photos and good old hoggsquattle (which is such a good name that it should be canon). Unlike Secrets of Star Wars, RebelForce Radio doesn’t get bogged down in the photos, so the conversation stays interesting. Jimmy and Jason plunge into a top ten film list in Empire magazine, giving their thoughts on the list and what would make their top five. And there’s the Billy Dee quote of the week which involves, who else, TMZ.

Secrets of Star Wars: Episode 14 goes deep…deep…into the TMZ Star Wars Episode VII photos. There’s 50 photos and they go through each of them.I have to be honest, I had a hard time trying to stay awake to listen to this episode. An in-depth discussion about the photos just isn’t that interesting to me, especially not in a picture-by-picture format when there’s 50 photos in question. Be that as it may, if you’d like to hear an hour and forty minute discussion on the TMZ photos, have at it. They’re certainly the only podcast I’ve heard tackle the feat.

Skywalking through Neverland: Episode 32 includes a full report of Star Wars Weekends and the RebelForce meetup. On top of that, they’ve got a fun interview with Jeremy Bulloch and there’s a full rundown on the Seven Dwarfs Mine Train ride via Dave Parfitt. Teresa Delgado and Tricia Barr pop up briefly as does Aljon Go and Jimmy Mac (all recorded while at Star Wars Weekends). If you’re trying to live the Star Wars Weekends experience vicariously, this is another podcast you’ll want to have on your playlist.

Star Wars Action News: Episode 425 has a collectible rundown on the new Disney electronic talking Star Wars figures, the MAFEX 6″ Darth Vader, Star Wars potato heads and more. They also talk about the Disney Star Wars half marathon and give a report from Star Wars Weekends with a very heavy collector focus. This show also includes a report from Steve the Ginger Prince on Milton-Keynes Collectormania over in the UK.

Star Wars Influences: Episode #7 focuses on the TMZ photos. With everyone covering these photos, I probably could have done without more coverage. I did like the insight on the Ralph McQuarrie inspired palace gateway that seems to be making it’s way into Star Wars Episode VII, and the hoggsquattle discussion is funny. Squeezed into this episode is a short audio clip that was not aired in RebelForce Radio’s interview with Roger Christian where he talks about Ridley Scott and Dune. Even though they covered the TMZ photos and the “Star Wars influences” aspect was a little thin, it was still a decent episode.

Star Wars Report: Episode #131 breaks out a full cast as they discuss the big RebelForce Radio meetup at Star Wars Weekends. Riley and Bethany are joined by Teresa Delgado, Tricia Barr and Aaron Goins as they recount all the fun moments they had at Disney, the RebelForce meetup and more.

Reviewed By: Skuldren for Roqoo Depot.

I am a co-admin for the Star Wars, sci-fi and fantasy site RoqooDepot.com.