One month removed from the wonder and madness of the San Diego Comic Con, I now have the opportunity to reflect on what went well, and what didn't.

a. Getting Up Oh-Dark Thirty

This was not something I was hoping to do, but after finding it necessary after my failure on Friday (see below, The Big Bang Theory), my brother and I were able to schedule our sleeping schedule to wake up at the hotel no later than 3:30am, so that we would at least be in route to the Hall H line by 5:00am.  This worked for our Hall H goals for Sat (WB, Lionsgate, Sony and Marvel panels) and Sun (Doctor Who 50th Anniversary).

On Sat, we made it in as part of the last two or three hundred people.

We were there 30 minutes later on Sunday, and it almost cost us the Hall.

We didn't focus too much on the exclusives, though there were a couple of things I was looking forward to, the biggest for me was the Sumo Snoopy set: 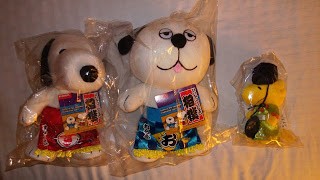 I found out from the Peanuts booth that these were only released in Japan and would no longer be available in the U.S. through them.
One of the other exclusives that my brother sought out was the Sheldon Cooper action figure with SDCC gear.  While it ended up that Entertainment Earth didn't sell out at the 'Con, we were able to get them on Sunday without having to wait in the extraordinarily long lines: 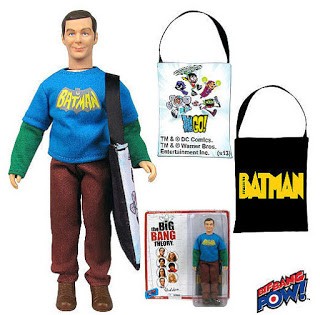 *Photo from www.entertainmentearth.com
There were other exclusives, but neither my brother or I felt it was worth getting in line for hours and missing out on the other things going on at the 'Con.
II. What Didn't Work
a. Social Media
The Twitter presence was the strongest ever.  There were more pre-'Con Twitter communications than ever, and there were many special outings, off-property events, and special giveaways that were communicated only on Twitter.
While I did follow these as best I could, I did not note down what may have been important and follow the directions and posted schedules.
Also, Twitter was heavily used by vendors and exhibitors to advertise raffle drawings, autograph schedules, and Swag times at specific booths.
I'm finding that being on top of the social media aspects of the 'Con will be increasingly more important every year.  So, my advice to future attendees, check your twitter feeds, find out which accounts are best to follow, and keep a small notepad available to record the tweets while you are getting around the 'Con.
FYI:  These are the Twitter accounts that I have found to be the more reliable ones leading up to and during the 'Con (in no particular order):
@OutsideComicCon = for off-property events
@Roddenberry = for Star Trek and Roddenberry publication and booth notices
@Marvel = year long tweets for all things Marvel, including Marvel SDCC panel and booth news
@CBR = Comic Book Resources tweet year round, but will also have SDCC comic related news, especially artist appearances
@CABrowncoats = California Browncoats for booth specific events and raffles as well as Firefly/Serenity fan meetings and sponsored charity announcements.
@LSFineArt = Lightspeed Fine Art has consistently had Star Trek talent appear and sign.  They will tweet when there is a schedule for talent signings.
@bleedingcool = Genre oriented tweets and blog entries.  They post year round and will also present the latest rumors that sometimes lead to confirmed news.
@SDCCsurvival = The SDCC Survival Guide is an annual publication that offers nice inside info and tips on attending the 'Con.  The Tweets follow suit.
@SD_Comic_Con = SD Comic Con Expert has provided excellent information in the past. This year had inside info and tips relating to events that happened at PetCo Park.
@SDConventionCtr = This is official SD Convention Center account that will update with the latest crowd and line information.  They do depend on real time updates from attendees.
@thewbdotcom = For information at the WB booth, including talent signing and times.
@Comic_Con = The official SDCC account which post updates to major queues, artist appearances, and general announcements.
b. Gaslamp Quarter
One of our goals was to get out to the Gaslamp Quarter more to take advantage of what was going on, and the SWAG.  Unfortunately, the timing needed to get there never seemed to work out, and we knew that Sat and Sun were shot because of the Hall H panels and time commitments.  Fri, my brother was able to attend a panel and I failed in my hunt to get autographs.  This leads to ...
c. Autographs
This year was a mixed bag:  I missed out on Friday's drawing for The big Bang Theory autograph opportunity.  I didn't get in line until 6:30am and the tickets were gone by 8:30am, with about 200 - 300 people in front of me.
However, I was able to get Kelly Hu's autograph which alone almost made my 'Con.  She's just as beautiful in person as she is on screen, and she's also quite personable and friendly.  I share this photo, because I was so happy ;-) 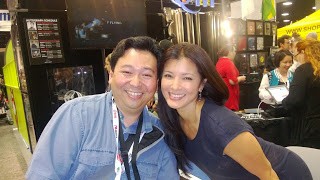 III. What Did I Learn?

a. Registration
It's always a gamble, but plan, schedule, and be ready to register to get your passes  Without them, everything else doesn't happen.

b. Hotels
Know the geography and traffic patterns for the hotels you select.  Our hotel was physically the furthest downtown hotel, but since we were heading out usually by 5:00am, traffic was a non-issue in the morning.

c. Twitter / Social Media
Check those accounts I noted above, as well as others that may provide excellent information. Also, Twitter may not be the only social media service available in the future, so be ready to handle multiple services, as needed.

d. Exclusives / Swag
Plan accordingly, and prioritize!  Know which one's you absolutely need to have and prepare to stand in line for hours, or battle the crowds in The Gauntlet.  Know that in some places, if you're in line, you will not have the ability to leave or switch places with people, unless the line managers and your line-buddies are good with it.

e. Plan, Plan, Plan
Preparation for everything will make your SDCC time the most enjoyable.  When you're planning, also prepare for disappointment: there is no guarantee that you will get in every panel and get every exclusive or swag you want.  Once you've accepted this, your blood pressure will love you for it and you'll really be able to enjoy yourself.

I'm already looking forward to the possibility of attending next year.  Registration is supposedly happening this month (Aug 2013), so I know I will be keeping an eye out for the announcements.

Good luck to you and yours, and please feel free to comment with your experiences.

Cheers, and have a great 'Con!
- Ravi