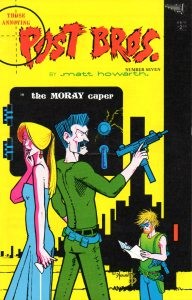 When I first started thinking about the Raena stories, I’d just seen Star Wars.  The only main female character was a princess. She was a kickass gun-waving princess who withstood torture, but she wasn’t the hero of the story. Her only solo adventure ended with her wearing a brass bikini.

When I started to think about Ariel, Raena’s best friend, I thought she should be a pilot: because in the Star Wars universe, there weren’t any female pilots — and that was just stupid. But as the Raena stories developed, I decided a pilot named Ariel wasn’t as clever as I’d originally thought. She needed another job, something equally important to overthrowing an evil galactic empire.

At the time I was coming to this realization, I was absorbed by Matt Howarth’s Those Annoying Post Bros. comix.  My love for the madmen of Bugtown went back to their first appearance in Heavy Metal in 1980, when it was just Russ and Ron sliding from one dimension to the next. Once the brothers had their own monthly book, they developed a cast of supporting characters, including a bunch of clones all named Caroline, the nuclear goddess Hiroshima, and Jeri Cale, who takes over Scabby John’s arms-dealing business.

In my imagination, Ariel was already tall and blond, but Jeri inspired Ariel’s change in occupation.  While Jeri dates Ron Post because he’s the worst man in Bugtown — and the most in need of the wares she can supply — Jeri lacks the heart of gold I wanted Ariel to have. Jeri’s in it for pure love of commerce. Ariel steals guns from the bad guys to arm the good guys for the fight.

One of the things I liked best about the character of Jeri Cale was her level of competence. The other characters (all male) call her a skinny bitch, but they can’t fault her business acumen.  Jeri knows the right tool for the mayhem at hand; she can sell it in the middle of a meltdown while making it sound like a bargain. Eventually Jeri grows bored with Ron’s incessant chaos and hooks up with Russ, the slightly older and much more calculating brother.

A decade after I read the Post Bros.’ adventures, Ariel started dating Sano Tocneppil in the stories we wrote for Anthology and Tales of the New Republic.  Sano was a rebel fighter pilot who fancies himself a bad man.  Back then I didn’t see the echo of Jeri’s relationship with Ron, but now, rereading the comix, it’s there.  In my defense, my co-writer Brian Thomas (who wrote As Above, So Below with me) was the one to add the Sano/Ariel subplot to our stories. I just went along with it. I’m amused at how the subconscious works, at the fluid line between inspiration and homage and original works that have similarities. 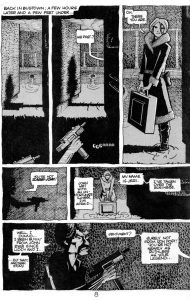 Those Annoying Post Bros. #3: the fateful meeting between Jeri and Ron Post, about to culminate in a memorable night out. You have to read this.

It’s funny now to read The Post Bros. in light of some of the comments that have been made about The Dangerous Type.  My book has been called brutal — although it isn’t especially.  (Another reader complained that the death in the book that I would consider is the most brutal — although it is entirely deserved —  wasn’t described in enough detail.)  There’s a high body count among the point-of-view characters in The Dangerous Type, but there are a lot of point-of-view characters.  The Post Bros.’ death toll is exponential in comparison.

In fact, the world the Post Bros. inhabit has similarities to that of Aeon Flux. I’m not sure what it says about the person I was in that era (late 80s/early 90s) that I found comfort in those things. I guess it was just so uncommon for me to see a girl holding her own in worlds that were as chaotic and dangerous as our own that I wanted to cheer her on.

Back issues of Those Annoying Post Bros., the issues of Heavy Metal with “Changes,” and other collectibles are available from Matt Howarth at the Bugtown Mall: http://www.bugtownmall.com/ 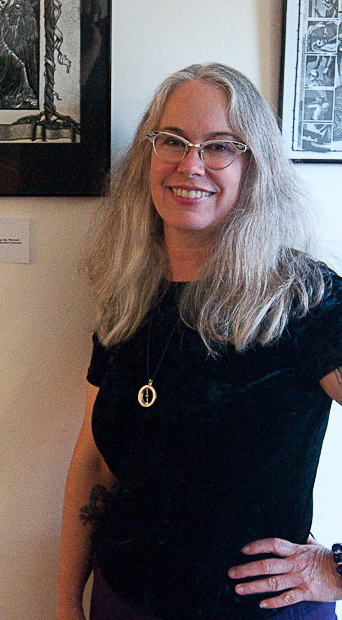