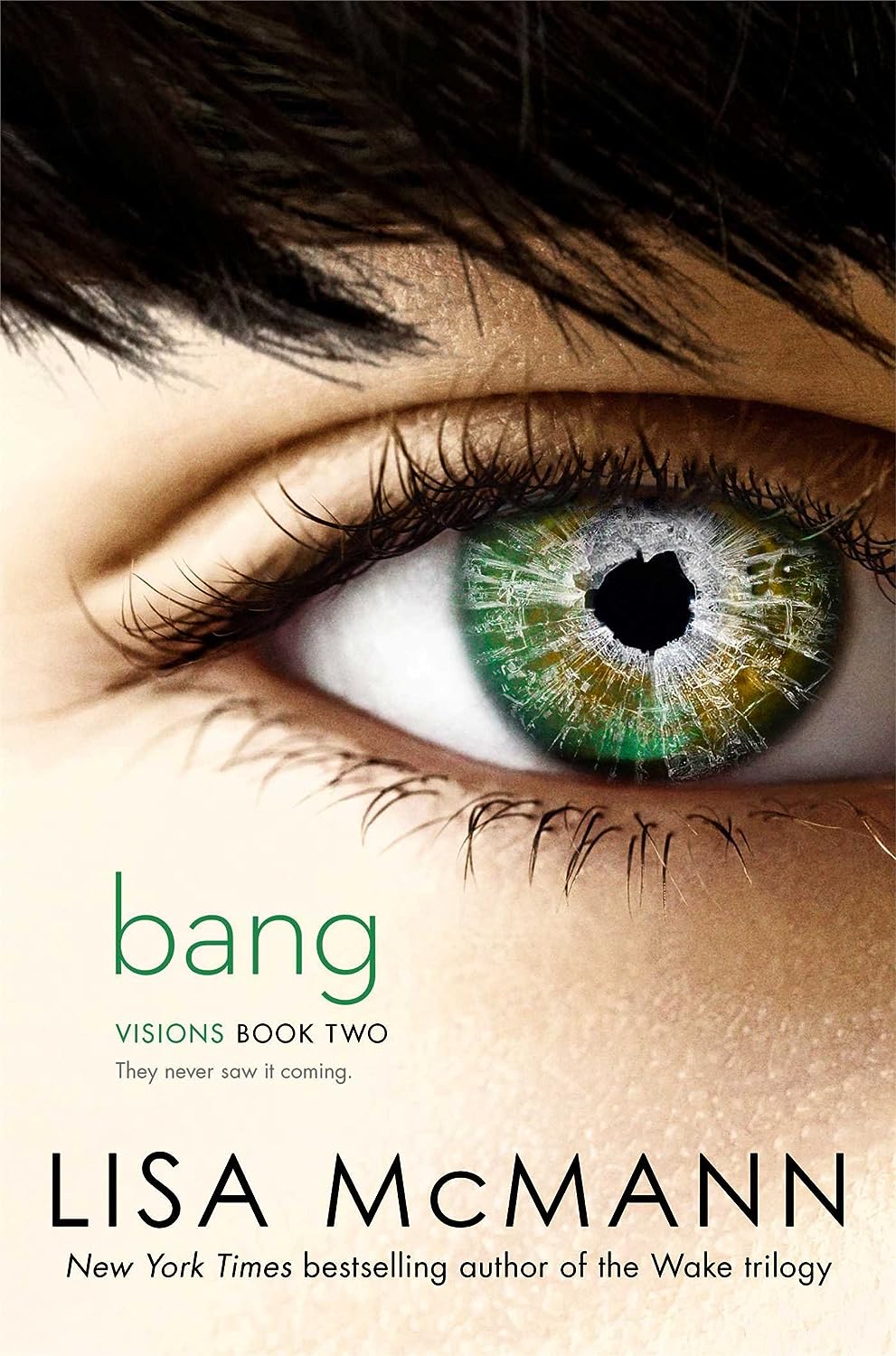 I thought that Crash, the first book in the Visions trilogy, was a bit repetitive.  Don’t get me wrong – I still couldn’t put it down and read it in short order.  But the never ending replay of the vision haunting Jules became tedious about the 100th time through.  Bang never felt like a CD set on Replay, probably because the vision is Sawyer’s, and Jules does not have firsthand knowledge of it.  Instead, Sawyer’s nightmare is relayed to Jules in painstaking detail as he is forced to watch it over and over again.  That distance made all the difference.

When Sawyer tells Jules that he’s suffering from a vision of an impending disaster, she wants to help him figure out what’s going on so they can stop it from happening.  Sawyer is haunted as the vision becomes ever more gruesome – a pile of bodies lie crumbled in a classroom, staining the floor red with blood.  All he can hear is the bang! bang! bang! of gunfire.  He’s desperate to find a way to make it stop, but if it’s anything like Jules’ vision of the crash, the only way to make it go away is to figure out when the shooting is going to happen and stop it, saving the lives of a bunch of people he doesn’t even know.

Using her experience with her own vision as a guideline, Jules dives in and helps him sort out details of the upcoming tragedy.  Where are the victims?  What are they wearing? Can he tell what time of day the shooting will occur?  They slowly unravel snippets of details about the incident, which aid them as they race to solve the mystery before the shooting happens, or before Sawyer is driven insane by what’s he’s forced to watch all the time.

To complicate matters, Jules and Sawyer have to deal with their families and their animosity towards each other.  The Demarco’s and the Angotti’s certainly know how to hold a grudge.  Neither of their fathers is ready to bury the hatchet on the feud that has simmered between them for years, and both Jules and Sawyer are punished when they are caught together.  Jules is having a terrible time showing any kind of respect for her father.  He’s a liar and a cheat, and she suspects that he’s a coward, as well.  I wonder if he suffers from the visions, too, but hasn’t been able to do anything about them.  Maybe that explains his odd behavior and probable mental illness?

I enjoyed the book because I liked Jules, her siblings, and Sawyer so much.  They are just trying to do the right thing, and not get buried by the weirdness of their families.  They all start to show some independence and resistance to the status quo, though all of their parental relationships suffered for it.

I don’t want to spoil any of the mystery, so I’ll just sum things up by stating that Bang kept me on the edge of my seat, and I hated to put it down.  It’s a very fast read, with plenty of twists and turns, and enough parental conflict to keep any teenager distracted.  I felt so bad for Jules!  Her home is certainly not a haven for her, and neither is Sawyer’s. I can hardly wait to learn what secrets Jules’ father is hiding in Gasp, the last volume of the Visions trilogy.

What Sawyer’s seeing might mean murder. The second book in a series from the New York Times bestselling author of the Wake trilogy.

Jules should be happy. She saved a lot of people’s lives and she’s finally with Sawyer, pretty much the guy of her dreams. But the nightmare’s not over, because she somehow managed to pass the psycho vision stuff to Sawyer. Excellent.

Feeling responsible for what he’s going through and knowing that people’s lives are at stake, Jules is determined to help him figure it all out. But Sawyer’s vision is so awful he can barely describe it, much less make sense of it. All he can tell her is there’s a gun, and eleven ear-splitting shots. Bang.

Jules and Sawyer have to work out the details fast, because the visions are getting worse and that means only one thing: time is running out. But every clue they see takes them down the wrong path. If they can’t prevent the vision from happening, lives will be lost. And they may be among the casualties…