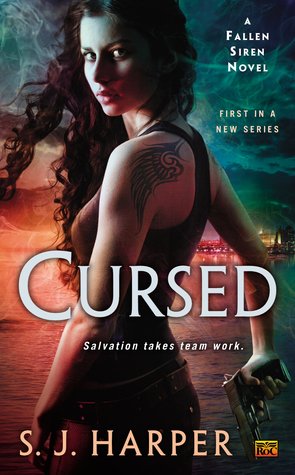 She’s cursed. He’s damned. Together, they make one hell of a team.

Emma Monroe is a Siren, cursed by the gods and bound to earth to atone for an ancient failure. She’s had many names and many lives, but only one mission: redemption. Now that she works missing persons cases for the FBI, it could be just a rescue away. Unless her new partner leads her astray.

Special Agent Zack Armstrong just transferred into the San Diego Field Office. He’s a werewolf, doing his best to beat back the demons from his dark and dangerous past. As a former Black Ops sniper, he’s taken enough lives. Now he’s doing penance by saving them.

Emma and Zack’s very first case draws them deep into the realm of the paranormal, and forces them to use their own supernatural abilities. But that leaves each of them vulnerable, and there are lines partners should not cross. As secrets are revealed and more women go missing, one thing becomes clear: as they race to save the victims, Emma and Zack risk losing themselves.

Wow, did I enjoy this book!  I have mixed luck with urban fantasy stories, but Cursed just clicked with me.  I thought Emma was an intriguing protagonist, with a compelling and angsty back story.  Hero Zack was also likeable, and he made me wish that Emma could find some way to get around the curse she’s burdened with.  The goddess Demeter is demanding a terrible sacrifice from Emma and her sisters; for allowing Hades to carry Persephone off to hell, they must repent.  Redemption comes at a heavy price.  Until Demeter is satisfied that Emma has paid for her betrayal, she can never find happiness.  Only sorrow will keep her company during the long nights, and if she dares to find love, Demeter swiftly punishes her for her disobedience, usually by killing Emma’s lovers.

To work her way to salvation in Demeter’s eyes, Emma is a field agent for the FBI.  She works missing persons cases, and she believes that her redemption might be just one more case away.  When she’s assigned a new partner, she’s dismayed to learn that it’s Zack Armstrong, an agent she worked with briefly, and had a red-hot one night stand with.  They had agreed to no contact afterward, so Emma is not happy to see him again.  At first I didn’t understand her motivation for this, but it soon becomes clear that Demeter won’t allow her to fall in love with anybody.  Bad things happen when she does, and her punishments are brutal.  Not only does she lose the one she loves, but Demeter adds to her sentence.  While I was reading Cursed, I started to get the feeling that it doesn’t matter how many people Emma saves.  Demeter is just going to keep sticking it to her and making sure she is miserable and alone.  She is a vindictive goddess, and letting bygones be bygones just isn’t in her nature.

Zack and Emma are assigned to find a missing artist.  The mystery behind her disappearance becomes ever more twisted and complex.  I enjoyed this part of the story, and found myself as confused as Emma and Zack were. Every time they thought they had a lead, they ended up at a dead end.  While their relationship was the main reason I liked this book, the case was just as compelling, and as they found themselves digging deeper into Amy’s disappearance, a complex supernatural world is slowly revealed to readers.  I found it very interesting, and I’m eager to learn more about it.  There are so many hints about big political changes in the structure of several supernatural societies, and I’m hoping that the impending fallout will be featured prominently in future volumes of the series.  I was even eating up the idea of a love triangle between Zack and Kallistos, and I normally do not enjoy love triangles at all.  Yet I’m all over this one!

I don’t want to spoil the suspense of Emma and Zack’s case, so I’m not going to say much more about that.  The same goes for their romance.  I will say that it’s hot, and the chemistry clicks between them.  Emma is so attracted to Zack, but she is afraid to rise Demeter’s ire and be forced to watch as Zack pays the price for her disobedience.   Zack’s a werewolf, so I was wondering if he would be able to hold his own against Demeter, but considering that she’s an immortal goddess, he probably can’t.  Sad face.  I wanted to see Demeter get a taste of her own medicine, but that doesn’t happen in this volume of the series.  Sadder face.  Now, I wonder if a Siren, a werewolf, and a vampire would hold their own against an immortal Greek goddess, and….. well, I would like to see that some time in the future.

The tone of the story is immediate and in your face.  I really loved the authors’ writing style.  If you enjoy New Adult novels, the pacing and tone will probably connect with you, so give Cursed a try if you’re looking to read outside your normal comfort zone.  The paranormal elements are woven seamlessly and engagingly into the story.  I loved this book and can’t wait to visit with Emma again