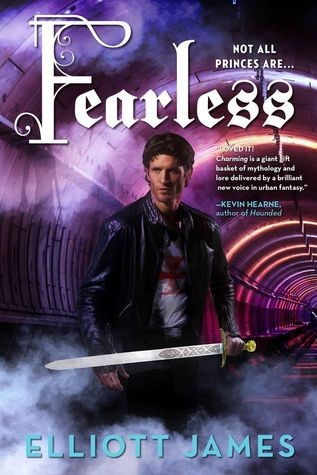 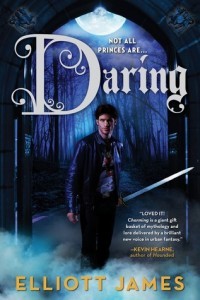 I rushed into Fearless immediately after finishing Daring (review next week) and I absolutely couldn’t stop reading it all day. Read at breakfast, read at lunch, read on the stationary bike, read during game saves and cut scenes. Just read.

The Pax Arcana series is gripping and gritty urban fantasy of the “hero is a snarkmaster” school of thought. Start with Charming (reviewed here). John Charming isn’t charming, but he has a cynical way of explaining what’s going on that will keep you turning pages long after you should get some sleep.

So far, at least, John Charming isn’t really very charming, and although he can be daring, at least in the “fools rush in” sense, he isn’t fearless either. It’s just that most of John’s fears are for the people around him and not for himself. He’s having a hard time admitting that he deserves a chance at happiness, or peace of mind, or even a decent night’s sleep.

In Fearless, we have the first story where John rushes in to save someone who is not a member of his merry band of tricksters, and a story where John himself does not start out as the primary bait or target.

Sheriff Ted Cahill, former Clayburg police detective (in Charming) and current Tatum County Sheriff and recently made dhampir, has invited John and his friends to help him with a missing persons cases that smells supernaturally fishy.

So John begins this story as a not-so-innocent bystander, sitting in a diner with his almost-girlfriend Sig and watching as seemingly every creepy and/or inanimate being or thing in Tatum starts zeroing in on college-student Kevin Kichida, who feels (or smells) just a little bit supernatural himself.

The trail leads John and Company to a powerful witch baking bread near Tatum, and a supernaturals-only underground fight-club in New York City. As John and Sig navigate the crowded supernatural community of New York, they try to draw just the right amount of attention from the man who runs the fight club – an old man who has spent centuries using his own descendants in an attempt to make himself a god.

Poor Kevin is his grandson, and he’s scheduled to be granddad’s next human sacrifice – unless John and Sig and their friends can get to granddad first. And end him.

Escape Rating A-: Rules are made to be broken. Or in the case of the Pax Arcana, seriously, seriously bent. One of the continuing threads in this series is the way that the bad guys, or the deluded guys, will use the letter of the Pax to get around the spirit of it.

While I’m specifically thinking of the way that the Knights have indoctrinated all of their generations to believe that werewolves and other supes are a threat to the Pax just be their existence (they actually aren’t), the whole thing gets stretched to its limits by the evil dude in Fearless.

He is always very, very careful to hide what he is doing from the normals, even as he pulls shit that makes everyone want to hurl. He never exposes the supernatural community to outsiders. He just wrecks completely magical murderous crap within it.

Breeding descendants solely for the purpose of taking over their bodies and extending your life is so disgusting that even his own ancestors have rejected him. 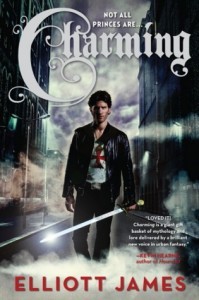 The Knights, and other so-called defenders of the Pax are often evil bystanders, and by that I mean in the sense of “the only thing necessary for the triumph of evil is for good men to do nothing.” With a lot of truly evil creatures, the Knights and their associated brethren do a whole lot of nothing, while pursuing too many people who are willing to live and let live, but stretch the Knights’ definition of people.

The way that the final pieces of the plot/counterplot come together at the end is awesome, and also awesomely convoluted. One of the conventions of this series, at least so far, is that we don’t see all of the pieces until after the dust has barely settled, and John finally explains what he and his cohorts did. It lets the reader get caught up in the danger zone, without knowing how it will all turn out. I like it.

I also like John Charming and his rather motley group of friends. John is definitely out of the snarky anti-hero as hero school of urban fantasy. His self-talk and overall narrative tone have the kind of gritty cynicism that reminds me of Harry Dresden in the later Dresden Files, or or John Taylor in Simon R. Green’s Nightside. John Charming is never quite sure whether he’s mostly a good guy because he wants to be, or because he’s compelled to be, or because staying with Sig and their friends is way better for his humanity than going back to being a lone wolf.

Fearless also has the feel of a big caper story. There are a lot of moving parts, some of which are moving in realms and phases that we can’t see. In the end, those parts all come together in an explosive climax that will make you groan, and then, finally and in relief, cheer.

After the end of Fearless, the eARC included a sneak preview of the untitled fourth book in this terrific series. While I’m ecstatic to know that there IS a next book, I’m afraid to read the preview. I know it will be just too much of a tease because I already want it NOW!