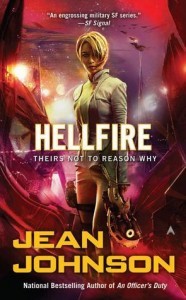 
As captain, Ia must now assemble a crew that can rise to the ultimate challenge of saving the galaxy. The hardest part will be getting them to believe her, to trust in her prophecies. If they don’t, her own crew will end up being the biggest obstacle in her race against time.

The Salik are breaking through the Blockade, plunging the known galaxy into war. Ia cannot stop it this time, nor does she want to. This is the terrible price she has seen all along—that some must pay with their lives so that others might live. Now only time itself can prove whether each member of her crew is merely a soldier or truly one of Ia’s Damned.

Damn if this isn’t a middle book. It’s a damned good middle book, but it is definitely a middle book, suffering from all of the attendant problems of a member of that dreaded breed. You need to have read the previous books in the Theirs Not to Reason Why series (A Soldier’s Duty, reviewed here and An Officer’s Duty) and you need to wait impatiently for the next and hopefully finally book in the series, Damnation, to be published, probably next summer.

It’s going to be a hellishly long wait.

Ia is finally the Captain of her own ship, the Terran United Peacekeepers Space Force (TUPSF) Hellfire. Her crew will come to be infamously known as Ia’s Damned. She knows exactly when and in what circumstances they will acquire that nickname because Ia is a massive precognitive. Her coming has been foretold by one interplanetary religion as The Prophet of a Thousand Years. Ia has only one purpose in her life; to save the existence of all sentient races from an invasion that will wipe them from the galaxy, 300 years in the future.

She walks the timeplains, always seeking the one and only one choice that has a dim chance of success. For her people. For all “people”.

By the point where she takes over the Captaincy of the Hellfire, she has revealed herself to her superior officers in the TUPSF and to her crew. Forces have aligned themselves against her; not because they oppose her ultimate purpose, but because they are playing a game, and can’t believe that Ia is playing for such high stakes that their game will be rendered meaningless.

Hellfire is a book about the hurry up and wait involved in waging a long, slow war…because there is an enemy who comes before the ultimate enemy, and Ia has to defeat them first, so that the TUPSF still has something left when the dark days come.

It turns out that even a massive precog cannot account for all the possible chances.

Escape Rating A-: Notice that in the “format read” section above I have both an ebook copy that I purchased and I bought a paperback at WorldCon just so I could get the author to sign it. This probably gives a hint on my thoughts about the series as a whole.

Ia is a fascinating character. She knows everything, and yet, sometimes she still can’t control everything, which becomes the central tension in this story. She may see all events, but she can still be tripped up by her physical limitations. She can only be in one place at one time.

The story drags on in the middle by the need to describe the military logistics of the “hurry up and wait” wear and tear of a long campaign. It’s a necessary part of the story but it just wasn’t as interesting to this reader as focusing on the human (or Gatsugi, or any other sentient) aspects of the story.

The parts that sing for me were the times when the focus closes in on specific actions. The early scene where Ia returns to her homeworld of Sanctuary and gets to seriously tweak the nose of the religious zealot bureaucracy was much too much fun.

Near the end, there is a scene that should bring tears to any sentient. The aftermath of the scene explains much about the price that Ia pays for her knowledge and power. It’s about page 339 in either the paperback or ebook.

Ia’s story is definitely being sent into the light. Read it and you’ll be enthralled into understanding.