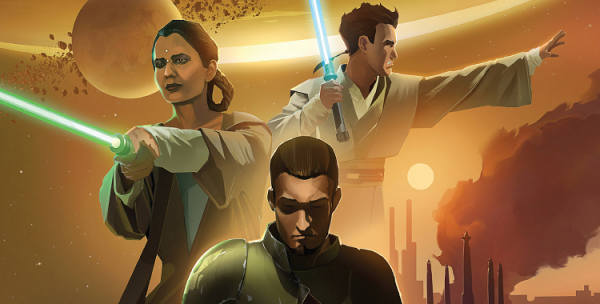 Out of the batch of Star Wars comics currently on the shelf, Kanan: The Last Padawan is, by far, the best title. I might be biased, though, since I’m a diehard fan of the Star Wars Rebels animated series and an even bigger fan of the Clone Wars era. Then again, I’m not the only one giving the comic book series high praise for its gripping story and captivating art.

Kanan: The Last Padawan is PERFECT. brb, I have to go meditate on what I just read, because MY FEELINGS ARE OUT OF CONTROL #StarWarsRebels

I've always been a novel > comic guy with @starwars but @Greg_Weisman Kanan is some of the best published SW storytelling. Period

I have to say, @Greg_Weisman's Star Wars: Kanan: The Last Padawan is the best of the new #StarWars comics.

My daughter & I give #Kanan high marks! Thanks @Greg_Weisman & @PepeLarraz for a #StarWars book we enjoy together! bit.ly/1cqrvxu

Kanan: the Last Padawan #2 by @Greg_Weisman @PepeLarraz & @Davcuriel is a stunning, and gripping issue, carrying on from #1 with flair!

Kanan: The Last Padawan is PERFECT. brb, I have to go meditate on what I just read, because MY FEELINGS ARE OUT OF CONTROL #StarWarsRebels

Kanan: The Last Padawan #2 picks up right where you’d expect: Order 66. We all know what happens. That sequence in Revenge of the Sith, where the Jedi fall at the hands of their troops, still breaks my heart. The events in season six of Star Wars: The Clone Wars surrounding ARC trooper Fives and the organic chip made the betrayal of the clone army even more chilling. So even though we are fully cognizant of the fact that Caleb Dume survives to become Kanan Jarrus, writer Greg Weisman still manages to instill fear and a dose of uncertainty throughout the flow of the story. Without a doubt, both Pepe Larraz’s superb art and his ability to capture emotion as well as David Curiel’s color palette excel in areas where the other Star Wars comics struggle.

Though it didn’t hinder the comic book issue in any way, there were a few details that I wish had been included in the story. For example, towards the end of issue #1, we saw Styles and Caleb fooling around when Commander Grey got the order from the Emperor. A confrontation between a turned clone and one who hadn’t received the order yet would have been compelling to witness, in my opinion. Styles could have tried to protect Kanan and Depa–the job clone troopers were bred to fulfill. At some point during the confrontation, however, he would have put his helmet on and things would have turned for the worst, since he would have been exposed to the directive to kill. It would have made Depa’s “Styles, no!” more heartbreaking when he was sent to capture and kill Caleb.

It also would have been great to see Kanan’s reaction in the present. We saw it briefly at the beginning of the first issue before the story dove into his memory, but a panel of him holding his head in his hands or leaving the Ghost’s cockpit to go to his room would have reinforced the emotional weight he continues to carry. This might be something we’ll see later on, so the fact that we don’t see it now doesn’t detract from the exceptional storytelling that took place.

Given the praise and general positive opinion about the first two issues, Kanan: The Last Padawan is a must for any fan looking for a well-rounded and beautifully illustrated story.