Review: Night of the Highland Dragon by Isabel Cooper 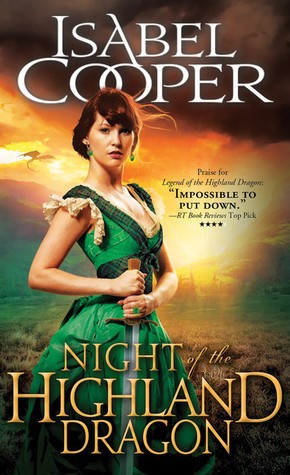 This series just gets better and better. And we finally get a little more dragon. 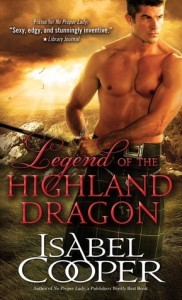 We also get an unusual heroine and hero. Not just because Lady Judith MacAlasdair is a dragon in her mid-180s, but also because the hero, William Arundell, admits to being 45. While there is a bit (more than a bit) of an age gap, it is great to see a romance where both the hero and heroine are mature adults and not only act like grownups but need their experience to solve the mystery.

And the hero and heroine take turns saving each other, both by fighting and by magical means. This is a partnership of true equals, and it is done well.

It helps that the chemistry between Judith and William is smoking hot, and not just because Judith is actually capable of belching smoke (and fire) in her dragon-form. These are lovers who both know what they are doing and are quite pleased that the other knows as well. Once they finally trust each other enough to get down to cases. And beds. And, for that matter, up against trees.

The story is that there is something wrong in the state of the Highlands, and Arundell’s colleagues at Special Branch D have traced it to Loch Arach. This branch of Her Majesty’s government investigates demon activity, or anything else supernatural that threatens the realm and its people. They have evidence, ghostly evidence, that someone in Loch Arach is summoning demons, and that never ends well. Or without a string of corpses.

Arundell’s colleagues also wonder about the mysterious MacAlasdair family. There is clearly something odd about them, and concern that it might relate to something sinister. Of course Judith is currently in charge of making sure that the dragonish side of the MacAlasdairs’ nature does not become common knowledge, or even rumored knowledge outside of Loch Arach.

But the MacAlasdairs have no truck with demons, so Judith and Arundell find themselves unlikely allies, and even more unlikely lovers, once they mutually agree that whoever is summoning demons, it isn’t either one of them.

Now they are both marked for death, along with anyone in the village who gets in evil’s way. William and Judith don’t put the pieces together until it’s too late.

Escape Rating A: One of the fascinating things about this book in the series is that we get a much broader glimpse of paranormal and magical activity in this story than the hints that we have had previously. 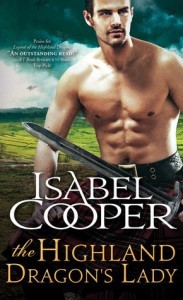 Colin, in The Highland Dragon’s Lady, definitely dabbles in magic, but the existence and organization of William Arundell’s Special Branch D shows that there is a lot more magical activity going on than anyone seems to realize. Also that his group is well-organized because their opposite numbers are also, and they are fighting fire with fire, and sometimes other spells.

One ends up wondering exactly which branch of the government Arundell’s Special Branch D is a special branch of. It’s clear that it is not Scotland Yard, but in our world, MI-5 wasn’t established until 1909 (as the Secret Service Bureau). But this is not quite our world, so maybe.

Whoever they are, in this story it is clear that they are one of Britain’s players, or perhaps puppetmasters, in the Great Game of Empire that led to World War I, which is also on the horizon in this mid-1890s story. As it was in real history.

One of the things I loved about this story is the maturity of the hero and heroine. Arundell reflects on his own maturity and mortality, in that his knees may not last much longer as a field agent, but that his experience still sees him through.

While Judith may look under 30, she never hides the experience that her years have given her. She is in control and in charge of Loch Arach every minute. Arundell generally defers to her, once he has discovered her true nature. (Before that he doesn’t trust her enough, not that he doesn’t recognize her command).

These people are just plain good together, and are a match for each other. Nor does Judith change to a simpering miss when she falls in love. She’s still Lady MacAlasdair, it is still her land and her people, and she is still very much in charge, even when she is desperately worrying about the fate of her lover.

Speaking of which, the story does a good job of dealing with the problem of what the ultimate result will inevitably be when a near-immortal falls in love with a mortal. It’s a solution that is just barely possible. Blood transfusion did not become widespread until World War I. But in the late 1800s it did exist. It was regarded as not merely risky but downright dubious, but it did exist. The circumstances set up in the story are just plausible, and add to the drama at the end.

I also liked that the dramatic crisis in this story was NOT precipitated by any willful misunderstanding between the protagonists. They are working together, very successfully, but are overcome by events that they did not quite figure out in time. For this reader, it heightened the tension deliciously.

Although this is the third book in the series, because the setting and characters are so different from the previous books, this would definitely be a place where one could enter the story without having read the previous books. That being said, the first two books are also a whole lot of fun.

I hope that the author will return to this series. I’m going to miss these Highland Dragons.