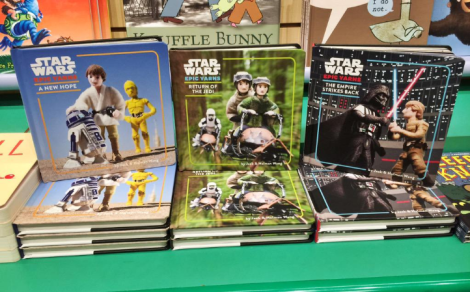 Star Wars Epic Yarns: A New Hope | The Empire Strikes Back | Return of the Jedi

by Jack and Holman Wang

Book Description: Jedi apprentices and little princesses will delight in this (heart)felt retelling of the Star Wars saga. And so will Star Wars fans of any age! The series launches with the original trilogy, and every word counts in these small but perfectly formed yarns. That’s because each volume features 12 iconic scenes, handcrafted in felt and pithily summarized in just a single word. The attention to detail is eye-opening; the proportions are just-right for small hands; the fun is guaranteed.

When people are asked to describe Star Wars, some give brief descriptions (“It’s about the rise and fall of a family line and the politics, wars, and battles that surround the times they lived”) and others go deeper into the story (“In a galaxy far, far away…”). Many more will toss individual terms or names, like lightsaber or Yoda, because these are words that have become part of everyday society. Well, try describing Star Wars in just twelve words! Brothers Jack and Holman Wang did so in Star Wars Epic Yarns, a series of three books aimed at young children aged 1-3 and published by Chronicle Books.

The concept of the books is both simple and delightful. Twelve words and twelve matching iconic scenes were selected for a child-appropriate retelling of each film in the old trilogy (A New Hope, The Empire Strikes Back, and Return of the Jedi) and each introduces the basic structure of Star Wars to a younger audience. The scenes aren’t stills from the movies, however. The brothers crafted elaborate characters out of felt and built accurate sets to capture the attention of would-be fans beginning to learn how to walk and talk.

Words used to describe events and characters in A New Hope include basic terms, such as boy, space, and fly. In The Empire Strikes Back, the word Force is introduced, with lightsaber and droids presented in Return of the Jedi. So not only do these books expose children to general vocabulary, but they’re also taught the basics of Star Wars. There is no better gift for a geeky parent looking to plant the seed of Star Wars in their child. The 12-word concept allows the parent or guardian to focus on the word, expand the story based on that word using imagination, and refer to the felt characters beside the word to interact with the child.

For adults without younglings running around the house (I am an example), the books aren’t exclusively for children. The books also inspire creativity in all ages. They introduced me to the practice of needle felting. I’m gradually gathering the proper materials, but the first thing on my list that I want to create using needle felting is BB-8 from Star Wars: The Force Awakens. And though some may think it sacrilege to tear a book apart, if you have extras, framing the illustrations adds a charming look to any wall. (For parents who have extra copies of the Star Wars Epic Yarns books, visit Quirky Bookworm for a post on how to create a book-themed nursery and give it a Star Wars twist by creating Epic Yarns collages or mobiles.)

All three books are a must-have for parents looking to introduce enchanting Star Wars illustrations to growing younglings and anyone who admires exceptionally crafted art and photography. Make sure to purchase your copies today and find my interview with the authors over at MakingStarWars.net.