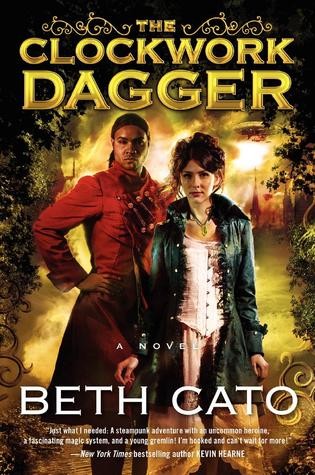 The world of Beth Cato’s Clockwork Dagger is so enthralling that I started the next book, The Clockwork Crown, the minute I finished this one, and in spite of the TBR pile from hell. I just had to find out what happens next.

Not that this one ends on a cliffhanger. It doesn’t. It’s more that the ending comes to a nice interim conclusion but it is so obvious that Octavia and Garret (and Leaf!) have many more adventures to survive before they reach their goal. A goal that they still haven’t completely identified by the end of Dagger. 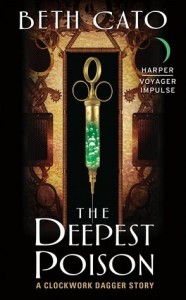 We start with Octavia Leander, the best medician of her generation, and possibly of every other generation. We first met Octavia in The Deepest Poison (reviewed here) and got a picture of her as gifted, talented and driven. Also as someone who obeys her own heart and her own conscience above any orders, no matter how sensible those orders might be.

Octavia is on her own now, traveling to take up a position as medician in the small, remote village of Delford, where an outbreak of plague requires the services of a medician in order to bring the village back to health.

The war between Caskentia and The Waste is over, or at least halted, so Octavia needs a position to keep herself occupied, employed and self-sufficient. Unfortunately for Octavia, and everyone else in both countries, this armistice, like all the ones before it, is deemed, or doomed, to be temporary.

Octavia has never traveled alone before. Medicians of the Percival School are generally protected and kept apart. The cacophony of voices who need their services makes it difficult for them to be among large groups of people. Octavia literally hears the music of their bodies, and can hear in an instant when someone is ill, or even just tired. In a large group, there are always lots of people who are not quite well. And even more who are demanding of the magical healing that only a medician can provide, whether they need it or not.

So even though Octavia is trying to hide her identity, she doesn’t know how to turn off her need to help people. A need that is sorely taxed when the airship she flies on is struck by a mysterious case of poisoning.

Medicinal magic as strong as that exhibited by Octavia in The Deepest Poison, can be a blessing or a curse. Octavia wants to heal all who need her, but realizes that her resources are finite, even if her desire is not.

The government of Caskentia fears her power. Even though she is a Caskentian citizen, the crown is all too aware that the power to heal can also become the power to kill. And Caskentia can’t afford for a potential weapon as powerful as Octavia to fall into the hands of the Wasters. The Wasters want to use Octavia’s power to heal their blighted lands, among other less benign “requests”.

Octavia just wants a cottage, an herb garden, and people to heal who like and respect her.

What she gets is a long-lost princess, a disabled and disgraced imperial assassin, and a grateful gremlin. While it is not certain that any faction specifically wants her dead, all the factions are certain that it is better for their side if she is dead instead of possessed by another.

As she dodges repeated assassination attempts, and fails to dodge repeated kidnapping attempts, she learns who she can really trust. And finds love in the arms of her greatest nightmare.

Escape Rating A-: In Clockwork Dagger we see the roots of, and the effects of, the battle that Octavia was caught in the middle of in The Deepest Poison. The battle, the war, the reasons surrounding it, even the people that Octavia relies on – nothing and no one is as it seems. Not even The Lady, the tree from whom Octavia derives her healing power and whom Octavia and all the Percival medicians worship as the source of all healing power and healing herbs.

The seeds sown in that earlier battle all bear fruit, much of it poisonous. Out of jealousy, the woman who raised and trained Octavia betrays her for money. Even worse, she also betrays the long-lost princess of Caskentia, the woman whose kidnapping began the war 50 years ago. Octavia’s solution to the poisoning plot brought her to the attention of the Wasters, who want to kidnap her and use her against her own country – or force her into become a short-lived broodmare like all the other Waster women.

Alonzo is the son of the man who burned Octavia’s village and orphaned her. He is also an apprentice Clockwork Dagger, and he lost the lower part of one leg in battle. The clockwork mecha that replaced it keeps him from acting or appearing disabled, but also provides a weak point for enemies to attack.

The romance between Alonzo and Octavia is very sweet, actually quite courtly, and very slow. They each have layers and layers of lies and misdirection that they have to reveal to each other before they can reach a level of trust. It takes a lot of time and effort on both their parts to get there. It is a revelation for Octavia that she is able to trust Alonzo, when his father’s name has always been the source of her greatest fears.

My favorite character in this story is the gremlin Leaf. Octavia rescues the tiny creature from a brutal attack, and comes to love him as a pet without caring that he is part construct or realizing that he is much, much more intelligent (and communicative!) than he first appears. She needs someone or something to care for in her aloneness, and Leaf is there and adorable and loving. She loves and is loved in return, expecting nothing, but receives everything.

There is more magic than steampunk in the worldbuilding of this series, but the way it blends together is awesome. This is a war where there are no good guys, and frankly no bad guys, at least at the level of nation-states.

Plenty of individuals do plenty of bad things, but there are no evil causes, per se. Everyone is using their limited means to attempt to heal and fix two countries that have both become corrupted, albeit in completely different ways.

At the end of The Clockwork Dagger, it is clear that the necessary healing is going to be hard-won. And that Octavia is going to be at the center of it whether she wants to be or not.