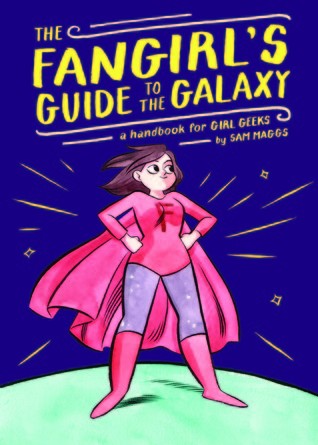 I wish this book had been around when I first started going to science fiction conventions, a long time ago (and in a galaxy far, far away). Not so much because of the information as the affirmation – that it is more than ok, in fact it is downright marvelous, to be a geek girl.

And I’m here to tell you that you can be a geek girl forever. Your tastes may change a bit, and more new neat things come along every day (and at a faster rate than ever) but being proud to love what you love is a joy that lasts a lifetime.

There is a lot of joy and enthusiasm in this book, along with a ton of information and some important and serious reality checks. All in the spirit of fun and to help fangirls enjoy their fannishness in safety as well as happily.

The book includes lots of “shout outs” to women who have and are continuing to make important contributions to geek culture in all kinds of ways, from video games to geek clothes to maker communities to mass entertainment.

One of the things I loved most was the affirmation that being a feminist is important for geek girls. Being a feminist means that you believe in and act on the concept that women are equal and should be treated equally, along with the acknowledgement that there are still some nasty corners of the internet in general and geek spaces in particular where that isn’t happening and that there are still battles to be won.

The description of online trolls, their various types and how to deal with them (sitting back and being quiet is NOT the answer) while still participating in online communities had the appropriate doses of humor while still making the point that there are things you can do, and ways that you can expose the trolls to the light.

One of the fun things in the book was the descriptions of the various big fandoms, what they love and what they fight among themselves about. I found myself more than a few times.

What can I say? This is my tribe.

Reality Rating B: The Fangirl’s Guide to the Galaxy is light and fun, and is pitched at a young adult/new adult audience that is curious about fan culture, especially fangirl or geek girl culture. The thing that it does best is that it affirms, enthusiastically and often, that being a girl geek is not merely acceptable, but downright awesome.

While I appreciated the descriptions of the big geek gatherings, like San Diego Comic Con and SXSW, the part of geek culture that was almost completely left out are the fan-run local conventions and WorldCon (WorldCon 2015 is in Spokane, WA).

It’s not just that this is the part of fandom with which I am most familiar, but that it is also one of the easiest ways to get in on the ground floor. If you read SF or Fantasy, this is a place to find a lot of like-minded people who are also into SF media and anime. And the entry fee is usually much, much cheaper than SDCC and there are probably one or two (or more) local cons within driving distance multiple times per year, wherever you live in the U.S.

For those of us who are introverts, and there are a lot of us in fandom, it is a much lower pressure environment in which to meet up with your friends and meet some of your favorite authors.

The emphasis in the book is on the big media cons of various types, and for those geek girls whose entry into fandom is through books, it is easy to feel left out. While some of the huge cons, DragonCon in my own Atlanta being an example, do have tracks for book authors and readers, not all of the media cons like Emerald City Comic Con (in Seattle) cover that particular waterfront.

The Fangirl’s Guide to the Galaxy is a book for young women who are looking for ways to share what they love, and the ways that they love it, with like-minded people. The tips and tricks on surviving at cons and how to handle yourself during autograph sessions and photo ops with your favorite stars are spot on.

There is a lot of fascinating stuff about cosplay. Not just how to get into it, but how much fun it can be and a million other reasons why people have so much fun dressing up as their favorite characters. Refreshingly, for a book aimed at young women, this section is also full of body-positivity. The author encourages anyone and everyone to be who they want to be because they want to be it.

For my personal taste there was a bit too much about cosplay in general. Other people’s interests may vary. The important thing about the cosplay section for me was the emphasis on “cosplay is NOT consent” and tips and how to handle (and report) when someone steps over that line.

I also occasionally found the language of the book just a bit precious, but I fully recognize that I am not the intended audience.

In addition to the cosplay info, there’s also a piece of this book pie for every different type of fan and fandom. Just the explanations of what means what and who ships who (and why) are loads of fun. I’m a big fan fiction reader, and there were still plenty of terms that I had been skipping over and finally learned the meaning of.

In short, this is a book that celebrates geek culture, and especially female participation in geek culture. We are fans, we love what we love enthusiastically and want to share.