Review: The Invasion of the Tearling by Erika Johansen 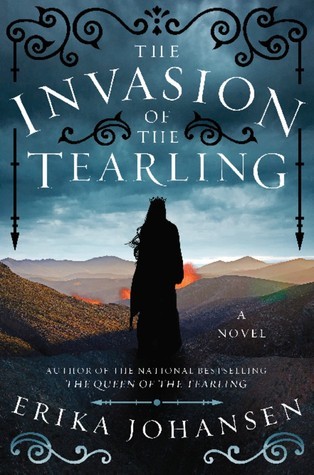 I absolutely adored the first book in this series, The Queen of the Tearling (enthusiastically reviewed here) and I couldn’t wait to get my hands on this second book, The Invasion of the Tearling.

I did enjoy The Invasion of the Tearling, it made a long plane flight go much, much faster. At the same time, it isn’t quite the book that Queen was.

The problem is that the author has committed trilogy. While this is a huge story and probably needs three fat books to wrap up all of its loose ends, Invasion definitely had the feel of a middle book. And the thing about middle-book syndrome is that nothing comes to a conclusion and that things tend to look darkest just before they turn completely black.

Invasion ended on a down-note, at least for this reader. Not that I felt let down in any way, but that Kelsea’s situation looks pretty bleak at the end of this installment. It’s the equivalent of the end of Tolkien’s The Two Towers, where Sam has just watched Frodo being carried away by the orcs, and Sam fears that he is going to have to carry on, with the Ring, alone.

But Kelsea isn’t trying to take the One Ring to Mount Doom. Instead Kelsea is trying to save her kingdom, the Tearling, from an invasion by the evil Red Queen of Mortmesne. (Mortmesne literally means “Dead Hand”, so the Red Queen is pretty much the evil queen of evil.)

After the events in Queen of the Tearling, Kelsea is now Queen (well duh) and the Mortmesne army is on its way to punish her for cutting off the slave-tithe. The Red Queen needs to punish the Tearling, and hard, because Kelsea’s defiance, as well as the loss of the slaves themselves, has created a lot of unrest in Mortmesne. Kelsea is the first person to show that the Red Queen is vulnerable, and she needs to be put down with extreme prejudice.

So Kelsea is trying to figure out what her power is and what she can do while preparing for a very imminent invasion by a force that outnumbers her own and is much better equipped. It’s a losing battle, and all Kelsea can buy is time, unless she finds some magic to defeat the immortal queen.

A demonic sorcerer from the past is playing both Queens against each other, in the hopes that one of them will succumb to his magic or his seduction and free him.

That past is embodied in the story of Lily Mayhew and William Tear, and takes place in a future not very distant from our own, on this Earth and in these United States. It is a chilling story that Kelsea experiences through Lily’s eyes in a series of fugue states. Neither the reader nor Kelsea are certain whether what she sees is the truth, and what bearing that experience might have on Kelsea’s present.

The stories weave together in a way that finally provides insights into just how the Tearling came to be. Lily’s story gives Kelsea strength, although not nearly enough information. At the conclusion of The Invasion of the Tearling, we are left on the edge of our seats, desperate to discover what will happen next.

Because Kelsea is on her way to Mortmesne, and if it isn’t Mordor, she can certainly see it from there.

Escape Rating A-: I loved The Invasion of the Tearling, but not quite as much as The Queen of the Tearling. Some of that feeling is the sense of being left in suspended animation – I need to know what happens next quite badly.

Kelsea is a heroine with a metric butt-load of flaws. Her on-the-job-training is grim, bleak and very, very rushed. On the one hand, she could have left the slave-tithe in place for one more year, until she had a chance to get her feet under her. But, and it’s a very big but, how could anyone sit there and watch as 3,000 citizens get carted away to slavery and not DO SOMETHING?

So Kelsea spends the book beset on all sides. She is only 19, but she has to grow up fast to face an enemy who is not merely more experienced, but seemingly immortal. The Red Queen has lived several times Kelsea’s lifetime, and has decades of experience, possibly all of it evil, to draw from.

The Mortmesne as a country has spent those years conquering its neighbors and beating down resistance on all sides. It is a country rich with plunder, and its army is both experienced and well equipped.

The slave-tithe, Mortmesne oversight and its own inept nobility have kept the Tearling unprepared and poorly equipped. The contest is unequal from the beginning, and the only thing the Tearling has going for it is guile. Admittedly, they have plenty of that, but they are fighting a delaying action. Everyone expects Kelsea to save them with some spectacular magic, not reckoning the cost of that magic to Kelsea.

Kelsea finds herself tottering on the edge of becoming just as evil as the Red Queen. The road to hell is paved with not just good intentions, but telling yourself that the end justifies the means. In order to save her people, Kelsea feels forced to use some highly questionable means.

And then there’s Lily Mayhew’s story, which is equally as grim as Kelsea’s, but in a different way. At first, we’re not sure whether it is real or whether Kelsea is just falling apart. Lily’s tale is chilling, all the more so because her dystopia is one that we can see from our own present. And it would make a good sci-fi dystopian suspense story in its own right.

But I’m still not certain what Lily’s story has to do with Kelsea’s predicament. It was fascinating but it also kept breaking into Kelsea’s story in a way that I found a bit jarring. And while it is intended to show how the Tearling came to be, the actual moment involved a bit of handwavium that left me puzzled.

However, the story of the Tearling as a whole is an awesome piece of science fiction/fantasy storytelling. I can’t wait to discover how it all turns out.