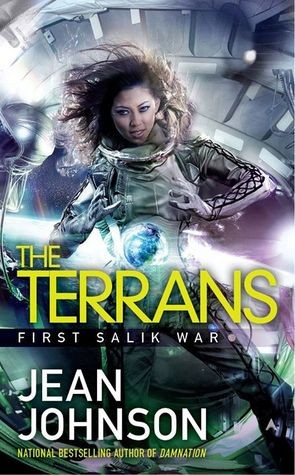 I picked Terrans up at lunch Thursday, and became so absorbed that I felt compelled to finish it. Compelled as in read until 4 am, get up and finish immediately. That kind of compelled. I couldn’t put it down, and almost didn’t go to sleep. 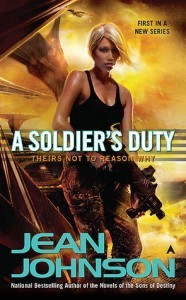 For anyone who has read Johnson’s Those Not to Reason Why series (start with A Soldier’s Duty (reviewed here) and start NOW!) this book is a prequel series. In her Those Not series the Terran United Planets are in the middle of a devastating and centuries long war. In The Terrans, we see the beginning of that conflict, and it will keep space opera and military SF fans on the edge of their seats.

I’m including military SF fans, even though The Terrans is not strictly a war story. This is a first contact story. It’s a different version of first contact, where the humans discover that they are on both sides of the contact, and that their various branches have more to offer each other, and more mess to get involved in, than anyone expected.

The ship Aloha 9 meets the V’Dan for the first time. And to paraphrase Walt Kelly in Pogo, “we have met the aliens, and they are us”. Because the V’Dan are definitely an unexpected offshoot of the human race. 10,000 of their, and our, years ago, a religious figure scooped their ancestors from Earth and deposited them on V’Dan.

It is just possible that the ancestor in question was actually Ia from Theirs Not playing with time and space, but we don’t know and it doesn’t actually matter at this point. But it is interesting speculation.

We meet the V’Dan because the last remaining members of a V’Dan warship are imprisoned by the Salik, who intended to eat them for dinner. I do mean eat for dinner and not have them over for dinner. The Salik, as established in Those Not, are cannibals who prefer that their food be live, sentient and struggling.

The rescue goes off without too many hitches, because the Terrans’ Ambassador for anyone they might meet is aboard the Aloha 9. Jackie MacKenzie is psi, and is telepathic, xenopathic and capable of telekinesis. She can not only read enough of the Salik thoughts to be positive about their dietary practices, but she can communicate with the surviving V’Dan captain well enough to enlist his aid in freeing his crew.

And that’s where the fun begins.

Captain Le’ith of the V’Dan is also psi, but very untrained. His rapport with Jackie from the instant they meet helps his crew adjust, and gives Jackie a far greater insight into the V’Dan than anyone might have expected.

It is not all smooth sailing. There is a psi-hating bigot among the Terran crew, and an equally xenophobic and obstinate civilian power-grabber on the V’Dan side. Neither of these idjits can see past the nose on their unreasonably prejudiced faces.

There is also a cultural roadblock. The V’Dan show that they are mature adults by developing a pattern of colors and spots during late puberty. It’s a virus that has become part of their DNA. They consider any V’Dan without those marks to be children. We Terran humans are the progenitors of the V’Dan people, but we don’t have those marks. The cultural misunderstandings abound, and have the potential to derail any possible alliance.

That’s if the surprising relationship between the captain and the ambassador doesn’t send everything to hell out an airlock first.

Escape Rating A+: The Terrans is both a very political story and a very personal one. Jackie Mackenzie, as an ambassador, former councilor (think senator), and re-instated military officer, provides the reader a way into the way that Earth works in the 23rd century. She’s been a politician, a civil servant, and a middle-ranking warrior. She’s seen a lot and done a lot. She is also a high-ranked, in the capability sense, psi, so she is able to show the reader how psi powers are used, regulated and received in a world that knows that some people are weapons.

What they don’t know is why psi powers suddenly started manifesting in the previous two centuries. The have the capability of measuring them, but they don’t know how they were created in the first place.

While I have my suspicions because I read the first series, I don’t know. And the capacity to guess or not has no bearing on enjoying this book without having read Those Not. But again, why would you?

A lot of this story revolves around the politics and procedures surrounding first contact. There is a lot of security and medical procedures. We have to be exposed to each others’ bugs and find ways to prevent epidemics on both sides. There is clear evidence that we’ve learned from our history.

But the big issues are political. And even though politics and process can be tedious, in this book they simply are not. The future world that the author has envisioned is one that mostly works, while at the same time it provides commentary on what has been learned from our history and ways that things could be done better. People have mostly gotten better, if only because they have learned from our deadly mistakes.

By introducing the V’Dan to our world, it gives the author a plausible and excellently used reason to explain 23rd century Earth to them, and therefore to us as well.

But as the story progresses, it also becomes a story about individuals. Not just Jackie and Le’ith, but also both crews and a few of the civil servants (politician is a pejorative term) who get close to the center of their storm.

One of the things I enjoyed very much is that, in spite of the way that Terran humans appear to the V’Dan, both Jackie and Le’ith are well into adulthood. They are both in their mid-30s, and have significant life-experience under their belts. So while they will lead a universe altering change for their peoples, this is NOT a coming of age story. And I’m glad of it. I found Jackie to be a woman I could both identify with and aspire to.

I’ve never made a secret of having loved the entire first series from beginning to end, as well as Johnson’s fantasy series and even her fanfiction. If you have any interest in space opera and/or epic science fiction, Theirs Not to Reason Why and The Salik War are well worth losing yourself in. 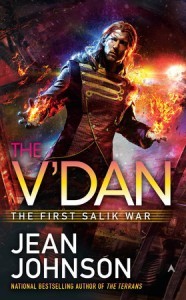 The second book of the Salik War, The V’Dan, is scheduled for release in January 2016. I will be haunting NetGalley until it appears.