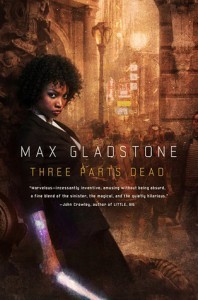 A god has died, and it’s up to Tara, first-year associate in the international necromantic firm of Kelethres, Albrecht, and Ao, to bring Him back to life before His city falls apart.

Her client is Kos, recently deceased fire god of the city of Alt Coulumb. Without Him, the metropolis’s steam generators will shut down, its trains will cease running, and its four million citizens will riot.

Tara’s job: resurrect Kos before chaos sets in. Her only help: Abelard, a chain-smoking priest of the dead god, who’s having an understandable crisis of faith.

When Tara and Abelard discover that Kos was murdered, they have to make a case in Alt Coulumb’s courts—and their quest for the truth endangers their partnership, their lives, and Alt Coulumb’s slim hope of survival.

Set in a phenomenally built world in which justice is a collective force bestowed on a few, craftsmen fly on lightning bolts, and gargoyles can rule cities, Three Parts Dead introduces readers to an ethical landscape in which the line between right and wrong blurs.

One of the foundational concepts of this story is that practicing law is roughly equivalent to practicing necromancy. That what we would call a law firm this universe would consider to be a partnership in a craft firm, where the Craft involved is the Craft of resurrecting the dead. Contract law is all about siphoning living energy from people.

On the other hand, that IS what a lot of people think lawyers do in this world, too.

Another construct underpinning this world is the idea of a world where gods are created and/or maintained by the worship of their followers. (This is an idea that Neil Gaiman took to an entirely different conclusion in American Gods.)

So we have the “legal” question of what happens when a god dies with contracts outstanding. And since Kos Everburning is a god, he always has outstanding contracts. After all, he was supposed to live forever. And he will. The question is who will control his resurrection; his worshippers or the opposing forces who have bought up those contracts that are about to default.

Into this very hot mess the author thrusts two characters in search of a purpose; the Craftswoman Tara, who must figure out who is behind Kos’ death before the spiral of destruction consumes her, and the very junior engineer-priest Abelard, who had the misfortune to be the first to discover that his god was dead.

Neither Tara nor Abelard are in positions of power or authority. Tara is less than a junior associate of her Craft firm; her employment is probationary. Abelard is the most junior priest in the order, and the god he worships died on his watch. If things go badly, the resurrected Kos may not even care for his people.

But Tara is intelligent and most importantly, persevering. As the chain of dead bodies and attempted assassinations gets longer and longer, Tara and Abelard doggedly conduct an investigation whose object is increasingly familiar even as the methods they pursue become more imbued with Craft and magic.

Who had the means, the motive and the opportunity to kill this god? Who needs to kill to keep this secret? And even more basic, and more important, who benefits most from the death of Kos?

Escape Rating A: Now I understand why people raved about this book–raved to the point where the author was nominated for the Campbell Award in 2013. The worldbuilding is absolutely phenomenal. Just the combination of contract law and necromancy is equal parts stunning and sly.

Tara and Abelard make an interesting pair of “detectives”. Tara is the one with the training, but she spends much of the story doubting herself and her ability not merely to solve the case, but simply to do her job well enough to remain employed. She constantly second-guesses herself. Part of her doubt isn’t about ability, it’s about figuring out where she wants to be.

Abelard is fascinating because he never loses faith. He knows his god is dead–after all, he’s seen the body. And yet, he still believes, and because of that belief he keeps going no matter how badly things seem to be going.

Although it is relatively easy to figure out who the ‘bad guy” is, his motives are not so easy to discern. The game he is playing has been very long and extremely convoluted. His henchpeople are not easily discovered. And even though I guessed who, the why, the what and the how, kept me flicking pages furiously at the end.

For anyone who enjoys complicated plots and intricate mysteries woven into their complex worldbuilding, Three Parts Dead is the start of a spellbinding series.