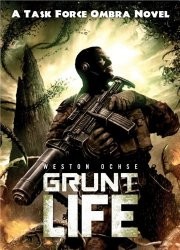 Okay, so let me put this one into context for you. I don't read nearly as much science fiction as I used to, and military science fiction is a sub genre I've really only dabbled in. However, I do appreciate a good alien invasion story, and I was already curious about Weston Ochse's Seal Team 666 series, so I decided to give Grunt Life: Task Force Ombra a read.

While I likely didn't enjoy it as much as a fan of the genre might, it was still a good, solid read with some elements that surprised me. The story has an interesting start, with a well-foiled suicide attempt atop a bridge that includes a pop-culture Lethal Weapon reference. It's an important connection, in that both are action-packed stories, with moments of sorrow and darkness, and elements of dark humor to alleviate that darkness.

In fact, the idea of suicide and post-traumatic stress disorder (PTSD) are not just elements of the story, but the driving force behind Task Force Ombra. By taking a hard look at where such dark thoughts come from and what they can do to a human being, Ochse sets up an interesting sort of evolutionary defense against the overwhelming psychic influence of the alien invaders.

As for those invaders, I like the fact that Ochse allowed to be so . . . well, alien. Although insect-like in their appearance and behavior, there's more to his aliens that just that easy sort of comparison. Their mental/emotional abilities dwarf anything humanity can imagine, and their motives are incomprehensible. In fact, while there is some debate about who they are and what drives the alien Cray, understanding that motivation simply isn't important to a grunt - understanding how to stop them, hurt them, and kill them is.

The opening arc of the story was, by far, the most interesting to me. Getting to meet the suicidal men and women recruited for Task Force Ombra, seeing how they're trained/conditioned in prison-like conditions, and watching as they engage one another in a confessional sort of catharsis is fascinating. Ochse devotes a considerable amount of time to setting the stage for his grunts, and I liked that. The explosion of all-out hostilities and actual war against the Cray, lacks quite the same depth, although it never forgets where it (or its grunts) came from. Having said that, there are still some interesting elements to the war, with experimental guns, swords, and well-armored mecha providing a very sci-fi contrast to the very human (and haunting) idea of massive airliners being used in suicidal attacks.

A fast-paced story with some daring ideas, Grunt Life: Task Force Ombra is a must-read for fans of the military science fiction genre, and definitely worth a read for sci-fi fans in general.