Sci-Fi Review: Jani and the Greater Game by Eric Brown 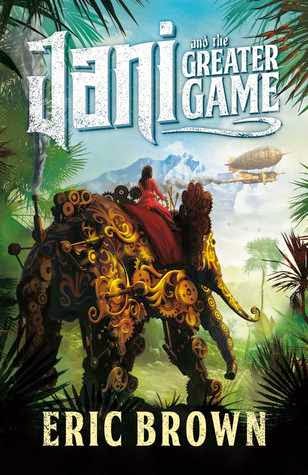 Although a bit silly at times, with some lazy plot points that border on embarrassing, Jani and the Greater Game was a fun read that left me wanting to read more in the series. Eric Brown has built an intriguing alternate history here, one that merges steampunk with (minor spoiler here) alien technology, and peopled it with some interesting characters.

Actually, to be honest, the villains are a rather one-dimensional racist caricatures, but the heroes are refreshingly diverse - a smart young woman of mixed Indian and English ancestry and brave young man of a lower Indian caste. To Brown's credit, he does allow for a couple of decent, upstanding Brits to counter all the greedy, nationalistic, arrogant conquerors, but the Russians and the Germans get no such saving graces.

There's not a great deal of story to this initial volume, but that's okay because what Brown has really set out to do is recapture the spirit of the turn-of-the-century adventure novel. In fact, the entire text is peppered with references to the likes of Verne and Kipling, including the suggestion that Verne's stories were based on actual events. This is an adventure/quest story that's primarily concerned with getting Jani from point A to point B, with a series of conflicts and escapes along the way, propelled by an underlying mystery that's rather obvious, but which does end in a nice twist. It's a fast-paced tale, filled with adventure, graphic violence, a little social/political commentary, and humor. It's not particularly deep or complex, but it's a fun journey to share.

As for the technology, the alien elements are actually the blandest, but only because they are variations on a theme we've seen them done before - although the invisibility cap and mind-reading skull-mesh are kind of cool. Instead, it's the human steampunk elements that are the most incredible, capped off by Mr Clockwork's Mech-Man and Amazing Mechanical Elephant. They're not just window dressing either, they're key elements of the story, and set-pieces upon which the overall climax relies.

Like I said, it's a bit lazy in parts, with the resolution relying on some conveniently foolish choices and timely coincidences, but at least some of that can be attributed to the youth of the protagonists. If you think of Jani and the Greater Game in terms of its young heroine, and let her set the context, then it's easy to forgive (if not completely ignore) the story's flaws. Fans of the pulp adventure and steampunk genres will certainly find something here to enjoy, and I suspect there are bigger, better things to come in the inevitable sequel.