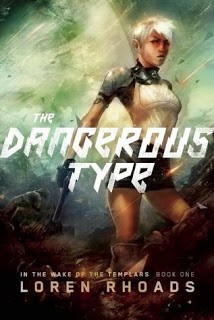 The cover blurb will tell you that The Dangerous Type is "a mix of military science fiction and an adventurous space opera" but it's probably more accurate to call it "a mix of adventurous space opera and dangerous romance." That's not a dig or a knock against the book, just an acknowledgement of what's inside. I think the term 'military science fiction' carries very specific expectations, and I'd hate to see some miss out on an exciting read because it doesn't immediately live up to that promise.

Before we get into the good stuff, let's deal talk about the novel's one glaring flaw - it's pacing. We get off to a fantastic start, with a bit of extraterrestrial tomb-raiding and a surprise inhabitant who isn't nearly as dead as she should be, but then the story falters. I fully expected Loren Rhoads to take a few chapters getting Raena up to speed on what's happened during her twenty years of imprisonment, but I didn't expect an odd, darkly perverse sort of love-triangle to consume so much of the story.

It's interesting, especially in the way the love story builds Raena's character and reveals her tragic backstory, but it does put the larger story on pause for longer than some readers may be willing to tolerate. That's a shame, because when we do finally get back to the heart of the matter - revenge! - the story really takes off and races towards one of the more satisfying conclusions I've come across in years. It's in the second half that it completely lives up to its "adventurous space opera" billing, complete with aliens, clones, double-crosses, sacrifices, daring rescues, and galaxy-spanning action. I half-expected Rhoads to pull back at some point, to offer up some redeeming element of Thallian to warrant a softer, more socially acceptable ending, but she refuses to pulls her punches.

Even though most of the world-building is off-the-page and in-the-past, Rhoads does set up an interesting future here. The dead Templars are a fascinating alien race, and the idea that humanity has become universally loathed for its genocidal victory is a nice twist. We're not the bringers of peace or voice of reason here - we're barely-tolerated scum who other races view with suspicion. Similarly, while we hop around to a few different planets, they're really just abstract set-pieces (like the generic pleasure planet) without the level of detail you'd expect out of a fully-fledged space opera. I loved some of the concepts, and would definitely be interested in seeing how they're played out in future books, but it all hinges on if/how she chooses to widen the overall scope.

As for the characters, they're a bit of a mixed-bag. Oddly enough, the three protagonists - Raena, Gaven, and Ariel - are probably the thinnest of the bunch. Don't get me wrong, they're entirely fascinating, I just didn't find any of them really evoked an emotional reaction. As for the villain, Thallian is a rapist, a spousal-abuser, and a torturer of children. He should be entirely despicable, and should evoke significant feelings of horror and disgust in the reader, but he's really just filling a role. Again, I didn't feel the emotional aspect there that would have more fully invested me in Raena's vendetta against him - but that doesn't detract from his satisfying end. The secondary characters were often the most engaging, perhaps because they were more human . . . more vulnerable . . . and (ultimately) more identifiable.

Despite the challenges with the pacing, the characters, and the romance, I will say that the action is top-notch, and the breakneck adventure of the second half really does carry the novel. It's not quite enough to fully realize the initial promise of The Dangerous Type, and it is dependent upon the reader's patience to get that far, but it does suggest some definite promise for the next installment of the trilogy.