Sci-Fi Review: To Sail a Darkling Sea by John Ringo 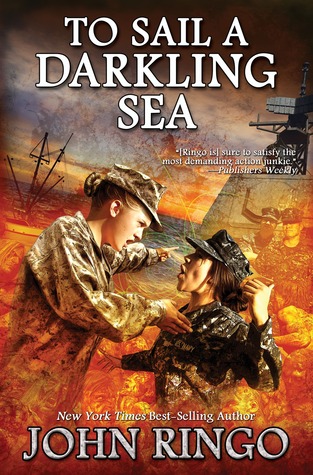 If you enjoyed Under a Graveyard Sky, the first in the Black Tide Rising series, or are a fan of John Ringo's unique brand of military-driven science fiction, then odds are pretty good you're going to enjoy To Sail a Darkling Sea.

The zombies take something of a back seat in this second volume, which is probably a good thing, since zombies can wear a bit thin after a while. Instead, the focus is turned to the survivors, with some really interesting exploration of the conflicts that arise when civilians and military personnel are forced into close quarters, especially in a world where power and authority is very much in question.

I was pleased to see that the book at least addressed, even if it didn't outright resolve, some of my concerns from the first book. The stress and weight placed upon 13 year-old Faith's shoulders is touched upon, avoiding the breakdown I thought was imminent, and resolving it instead with a transition to military discipline. She is largely the star of this second volume, which is no less implausible than it was on the first book, but she's given room to grow and to earn the reader's respect. She's simultaneously set up as a teenage sex symbol, and defended against characters who see her that way. What ultimately made that contrast work for me was the emphasis on the nightmares she experiences on the Alpha, with all the women who’d been raped and murdered trying to warn her of something, and how the spectre of those rapes continues to haunt her actions.

As for the promise of multinational intrigue, it's still just that - a promise - but we do learn a bit more about the three governments who still retain a measure of power. More interestingly, we get to explore the potential for a cure, and the power that brings with it in a world without borders. It's a valuable bargaining chip, and one that nations would quite literally go to war over. At the same time, Ringo makes us think long and hard about the logistics of post-apocalyptic survival - how you keep the equipment of war running, how you keep survivors fed, and how you manage all the little things like cleaning, cooking, laundry, and the rest.

Overall, this was a slower book than the first, and one I found got a bit repetitive by the end. It lacked some of the storytelling power of the first book, and got a little too involved in the military-driven elements for my tastes, but I recognize that's Ringo's niche within the genre, so I can hardly complain. It's still a well-written story, with some good, snappy dialogue, and a real flair for imbuing characters with distinct personalities. I liked the way Ringo brought the military and civilian worlds together, and thought the whole conflict between Faith, the Hollywood big shot who accosts her, and the Captain who would rather suck up to a celebrity than defend one of his soldiers, was exceptionally well played out.

Like the first volume, To Sail a Darkling Sea just stops, without the benefit of a climax to provide a sense of even temporary conclusion. There's a small resolution in the epilogue, but it's almost after-the-fact. The literary critic in me cringes at that betrayal of the traditional story arc, but the realist in me appreciates that Ringo didn't set up an arbitrary 'big' ending, just for the sake of ending on a bang.