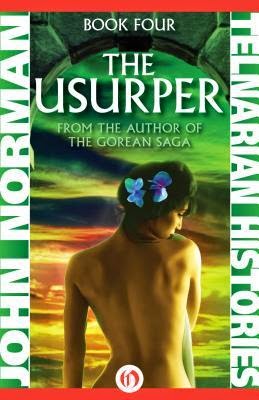 A little over 20 years ago John Norman stepped outside the world (if not the themes) of Gor and delivered a trilogy entitled the Telnarian Histories. Whereas the Gor novels were primarily fantasy epics tinged with science fiction elements, this new trilogy flipped that around, being more of a traditional space opera with fantasy influences. Like the Jason Marshal trilogy with the Gor saga, it was an interesting sort of diversion or side story, but most fans just wanted more Tarl Cabot. As such, I never expected to see the series continue, so I was genuinely surprised to be offered a copy of The Usurper for review.

Having looked back and re-familiarized myself with the first three Telnarian Histories, I've found myself with a new appreciation for the books. Thematically, they're not much of a departure from the Gor novels, and no hero will ever replace Tarl Cabot, but the futuristic ideals are something new, and the space opera elements lend themselves well to the storyline. More than that, the mythology is more detailed than we ever saw in Gor, and it attempts to do what Jacqueline Carey later did with her Kushiel's Legacy series, providing a spiritual justification for what many have seen as sexist, sadomasochistic core to Norman's writing with Dira, "the goddess of love and beauty . . . the goddess of slave girls . . . the slave girl of the gods."

In terms of narrative, little has changed over the years, with The Usurper having the same sense of style that fans have become used to, but which may unsettle a new reader. Expository prose is often long and blocky, with descriptions that can stretch into a second page without a paragraph break, and the amount of detail surrounding the physical, mental, emotional, and psychological realities of slavery is often exhausting. That's not to say it isn't fascinating, or sometimes necessary to the plot, but it may take some readers deeper into a submissive mindset than they're comfortable with. Dialogue is often very formal, carefully structured and delivered as if for an audience, with little of the casual banter we so often expect of the genre. Again, that's not a flaw or a complaint, just an observation on what makes Norman's writing unique. Overall, however, the prose here is stronger and more polished than what fans may be used to, with phrases like "the airless, lonely, nigh-vacant deserts between world" having an almost poetic quality to them.

The world-building is exceptionally strong here, as it was in the Gor saga, with a fully realized history of conquest and rebellion. Culturally, there are significant Greco-Roman influences to the story, but there's also a bit of a Conan-esque flavor to Ottonius, the barbarian King. It's really with the philosophies of sadomasochism and the spirituality of submission that the story comes alive. Despite the criticisms and complaints of critics, this is not merely a tale of men being cruel to women, or of women being bound and broken. Norman presents us with a culture in which free women are rarely that - they're as bound by society's rules and conventions as any slave is by her collar. Ironically, it's the slaves who are more intellectually and spiritually liberated, more respected and admired by the men around them, and the fact that they find true happiness and contentment in their submissive role is crucial to the tale.

This is a book that's heavy on the history and the cultural composition of the world, with a mysterious narrator often acting in the role of teacher or advisor to the reader. Part of that is necessary to allow new readers to catch up on what's gone before, but part of it is also deliberate world building. As for our hero, Ottonius, he has grown and evolved significantly from what I remember. Instead of the cold prototypical Norman protagonist, he has acquired some of the rough-edged charm and black humor common to pulp adventure heroes like Conan. Filene is a remarkable character as well, perhaps the most well-developed female character Norman has written. She begins the story masquerading as a slave, in order to get close and assassinate Ottonius, but we also get glimpses of the free woman behind the mask. Of course, she's very quickly found out, turning that masquerade into a reality, but she retains a spark of personality that only grows brighter as the tale continues.

There's more of conflict to The Usurper than I remember from any of the Gor novels as well, which is sure to appeal to fans of more militaristic science fiction and fantasy. Alien technology, starships, blockades, sieges, and battles dominate much of the second half of the book. This is very much Otto's tale and Otto's conflict, with him at the center of it all, but we do get a much wider view of the war and how it impacts the characters around him. There are some long, slow periods of prose before we get to the conflict, and Norman still interrupts the action to share the insights of slaves and masters on their role in the battle, but overall I found this to have a much faster paced story, with a better balance of plot and philosophy. Politically, it's a sharper tale as well, with great attention devoted to the affairs of rulers and captains, which helps bring it all together.

If you've ever found yourself curious about John Norman's work, then The Usurper is a great place to begin. Even though it's the fourth book of the Telnarian Histories, it can still be read as a standalone title, which is almost necessary with a 20 year gap. If, like myself, you always saw this saga as a weaker sort of cousin to the Gor novels, then you're likely to be pleasantly surprised. However, if you're deeply offended by his social philosophies or his depiction of women, and aren't interested in the 'how' and 'why' of his world . . . well, this isn't going to change your mind.