epic fantasy, horror, mailbox monday, stacking the shelves, suvudu, what are you reading?

If it's Monday, then it must be time for Mailbox Monda y, a weekly meme that provides a virtual gathering place for bloggers (and readers) to share the books that came their way over the past week. Originally hosted by Marcia, of To Be Continued..., it has since become something of a book tour, with a new host each month. This month's host is  Crystal @ I totally paused!

Only two new books came in the door this week, but they book look fantastic: 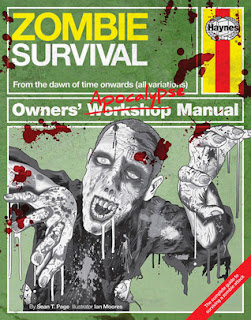 What would you do in the event of a zombie apocalypse? Would you know how to protect your family, forage for food and hold your own if confronted by the undead?

Packed with vital information about how to prepare yourself (mentally and physically) and your surroundings for attack, the Zombie Survival Manual will also include advice on how to flourish in a post-apocalyptic world.

Accompanied by illustrations, maps, diagrams and step-by-step instructions, this manual will be essential reading for those interested in protecting themselves, their families and society at large from the living dead. 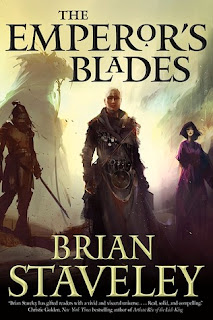 In The Emperor's Blades by Brian Staveley, the emperor of Annur is dead, slain by enemies unknown. His daughter and two sons, scattered across the world, do what they must to stay alive and unmask the assassins. But each of them also has a life-path on which their father set them, destinies entangled with both ancient enemies and inscrutable gods.

Kaden, the heir to the Unhewn Throne, has spent eight years sequestered in a remote mountain monastery, learning the enigmatic discipline of monks devoted to the Blank God. Their rituals hold the key to an ancient power he must master before it's too late.

An ocean away, Valyn endures the brutal training of the Kettral, elite soldiers who fly into battle on gigantic black hawks. But before he can set out to save Kaden, Valyn must survive one horrific final test.

At the heart of the empire, Minister Adare, elevated to her station by one of the emperor's final acts, is determined to prove herself to her people. But Adare also believes she knows who murdered her father, and she will stop at nothing—and risk everything—to see that justice is meted out.


As for what I'm reading this week, It's Monday! What Are You Reading? is a weekly meme hosted by Book Journey, and it's focused on what's in your hands, as opposed to what's on your shelf. I've got reviews coming up for:

What's topping your shelves this week?

© 2013 Beauty in Ruins All Rights Reserved