If it's Monday, then it must be time for Mailbox Monday, a weekly meme that provides a virtual gathering place for bloggers (and readers) to share the books that came their way over the past week. Originally hosted by Marcia, of To Be Continued..., it has since become something of a book tour, with a new host each month.

A relatively quiet week on the review front, but a nice mix of requested review titles and approved ARCs:

Harry August is on his deathbed. Again.

No matter what he does or the decisions he makes, when death comes, Harry always returns to where he began, a child with all the knowledge of a life he has already lived a dozen times before. Nothing ever changes.

As Harry nears the end of his eleventh life, a little girl appears at his bedside. "I nearly missed you, Doctor August," she says. "I need to send a message."

This is the story of what Harry does next, and what he did before, and how he tries to save a past he cannot change and a future he cannot allow.

When an elderly professor at Cambridge is murdered, a victim of bizarre, ancient Chinese torture, Alex Hawke teams up with his Scotland Yard colleague and friend Inspector Ambrose Congreve to find the killer. But the death is only the opening move in a tense and lethal game of geopolitical brinksmanship.

In the United States the president has begun behaving strangely. Is his mental health deteriorating—or is there something far more sinister behind his questionable moves? The answer is crucial, for tensions are mounting between China, North Korea, and the U.S. And China has launched fighter jets and a mega submarine vastly more sophisticated than any seen before—military technology that leapfrogs anything the U.S. and Great Britain possess.

With the situation edging toward an unthinkable abyss, Hawke must pull off his most daring mission yet: infiltrate the China and neutralize the source of their advantage . . . or risk witnessing World War III.

A prince with a quest. A commoner with mysterious powers. And dragons that demand to be freed—at any cost.

Prince Corin has been chosen to free the dragons from their bondage to the Empire, but dragons aren’t big on directions. They have given him some of their power, but none of their knowledge. No one, not the dragons nor their riders, is even sure what keeps the dragons in the Empire’s control. Tam, sensible daughter of a well-respected doctor, had no idea before she arrived in the capital that she is a Seer, gifted with visions. When the two run into each other (quite literally) in the library, sparks fly and Corin impulsively asks Tam to dinner. But it’s not all happily ever after. Never mind that the prince isn’t allowed to marry a commoner: war is coming to Caithen. Torn between Corin’s quest to free the dragons and his duty to his country, the lovers must both figure out how to master their powers in order to save Caithen. With a little help from a village of secret wizards and a rogue dragonrider, they just might pull it off.

Imagine the epic reach of Tolkien, the grit of George R. R. Martin and the nonstop adventure of Robert E. Howard, and you will have some idea of the thrills awaiting you in "The War of the Moonstone", a tale of love, bloodlust and tragedy set in a land on the brink of destruction. Black times have come to Felgrad. Once one of the jewels of the Crescent, now the dark powers have turned their gaze upon it, and Giorn Wesrain, son of the baron of Fiarth, has become inextricably drawn into the machinations of the Dark One, along with his beloved Niara, High Priestess of Illiana. They have loved each other in secret for years, but that love will be tested as the armies of the Dark One strive against Felgrad.

Worse, one of their own, Raugst, is in truth an agent of the enemy, and Raugst will soon bend the barony to his will. If Felgrad falls, so too will the rest of the Crescent, and then the Dark One will be unleashed upon the world. Only Giorn and Niara can stop him, but how can they when the legendary Moonstone, the great artifact of the Light that has kept the fell powers at bay for thousands of years, has been taken? As Giorn sets out into the waste lands after it, to either reclaim it or find out what the Dark One wants it for, enemy hordes swarm the mighty city of Thiersgald and Niara is trapped behind its walls . . . with Raugst. This is only the beginning of the adventure that awaits you in "The War of the Moonstone". 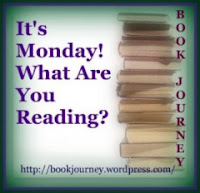 It's Monday! What Are You Reading? is another weekly meme, this time hosted by Book Journey. This one is focused on what books are spending the most time in your hands, as opposed to what's been added to your shelf.

With an eye towards reviews over the next few weeks, my imagination is currently split between a few different titles:

Snake Typhoon! by Billie Jones
Figure out how to stop a snake typhoon and save the world... or die trying! Yeah, that sounds like my kind of adventure. :)

The Book of the Crowman by Joseph D'Lacey
The first book was one of the best post-apocalyptic fantasies I've read in years, so you better believe I'm excited to have this ARC land in my lap.

The Roads to Baldairn Motte by Garrett Calcaterra, Craig Comer and Ahimsa Kerp
Despite not really having space in my TBR pile, I couldn't resist this . . . and I'm enjoying it so far.


What's topping your shelves this week?
© 2014 Beauty in Ruins All Rights Reserved