Well, another Swancon has come and gone. As always, there were excellent speakers and interesting panel topics.

I was on four panels. The first was the most exciting for me as I was up there on the podium with a trio of well-known authors: Anne Bishop (The Black Jewels Trilogy) Jim Butcher (The Dresden Files series) and Dave Luckett (The Tenebran Trilogy - and writing as LS Lawrence, several YA historicals, including The Eagle of the East and Escape by Sea). We discussed worldbuilding and what pitfalls and problems can trip up the unwary writer. We had an excellent moderator in Doug Burbridge. 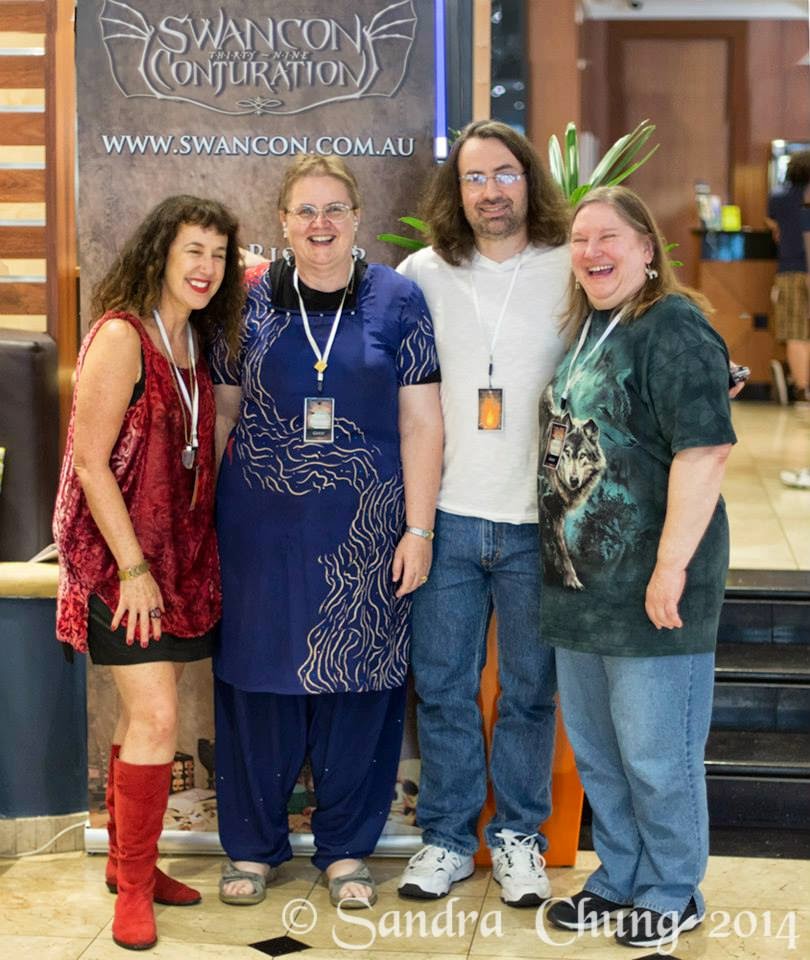 Swancon 2014's guests-of-honour: Isobelle Carmody, Sally Beasley, Jim Butcher and Anne Bishop. They are all excellent speakers and Jim Butcher is a very funny guy. He had the audience in stitches most of the time! (Photo: Sandra Chung)

On Saturday, I sat with Stephen Dedman, Sarah McFarlane, Ian Nichols and moderator Andy Hahn on a panel about remakes of Shakespeare. Seeing as there have been over 400 films and TV shows created from Shakespeare's life and works, I concentrated on ballets and operas. There was lively discussion from the floor and we all came away knowing a bit more about the greatest writer in English - and maybe in any other language, too.

Sunday's effort was 'How to Piss off a Publisher' with Andrew Harvey, Dave Luckett and Cat Sparks. As one who supplements her pension by mentoring and critiquing new writers, I had a lot to contribute to this one. The biggie, of course is 'READ THE F-ING GUIDELINES  FOR HEAVEN"S SAKE! and the second biggest is 'DON'T JUST READ THE GUIDELINES - DO AS THEY COMMAND!'

It's amazing how many beginning writers not only don't follow the publisher's guidelines but haven't haven't even bothered to learn basic English grammar, spelling, punctuation and syntax. These are the tools of the writer's trade, and without them you'll do about as well as a plumber trying to clear a blocked toilet with a screwdiver. There were some very long faces in the audience by the time we'd explained that it's a buyer's market and less than 1% of submissions to traditional publishers ever see the light of day.

Because of being on that panel I missed Glenda Larke's launch of her new trilogy, The Forsaken Lands. Book one, The Lascar's Dagger, is a great read. I haven't finished it yet but I'm deeply impressed by Glenda's poetic descriptions that subtly set the scene and her pacy narrative that is nonetheless full of juicy prose. How about 'He pushed himself up, blinded, utterly vulnerable, dripping blood and sneezing, blowing out clouds of gold-coloured powder'. I feel really sorry for Saker, while nonetheless laughing my head off as I imagine the scene.

On Monday, my fellow-panellists were Susanne Akerman, Stephen Dedman and Gina Goddard. We discussed what libraries meant to us: how they both informed and catered to our tastes in books and fulfilled our yearning for knowledge. Once again, there were animated contributions from the audience, all of whom, understandably, appeared to be well-read bibliophiles!

But the most exciting part of Swancon for me was the launch of my first novel, The Dagger of Dresnia, book one of The Talismans Trilogy. It was such a giddy-making event that I'm going to be really self-indulgent and give it its own post!

I'm an Australian freelance writer, editor and reviewer who loves good stories - traditional and historical fantasy best of all!