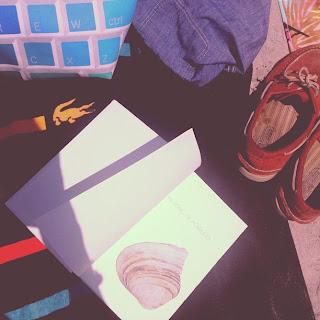 A good book, a craft drink and a properly functioning AC are the essentials of a hot NYC summer, and while I'm not an A.C. aficionado, I do know a thing or two about good reads. There's nothing more relaxing than reading on a bright summer day with a cool breeze, helping you flip through the pages. Take a peek at what's been on my roster for summer reads. 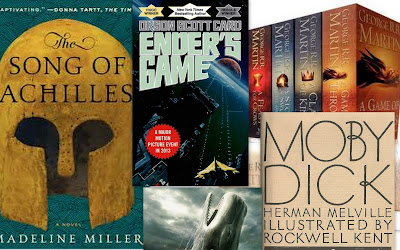 1. The Classic- Moby Dick by Herman Melville- It doesn't get  more classic than an all out ocean adventure chasing the famed white monster of the seven seas. The use of metaphors for the themes of good and evil could be something that you probably missed during your seventh grade literature class so it's definitely worth re-reading.

2. Summer Love Story- A Song of Achilles by Madeline Miller- A beautiful retelling of the Iliad from the eyes of Patroclus (Achille's famed lover and brother in arms). This was by far my favorite read this summer. I can't even begin to describe the emotional roller coaster this book put me through, but it was worth every page.

3. Sci-Fi Fix- Ender's Game by Orson Scott Card- An intelligent summer read about the power of the mind, youth manipulation, military strategy and gaming. And like any good sci-fi read it paints an incredibly accurate picture of the world we live in. Try reading this before it hits theaters this fall.

4. Fantasy- A Song of Ice& Fire Series by George R.R. Martin-  Game of Thrones, need I say more? Seriously, do I? 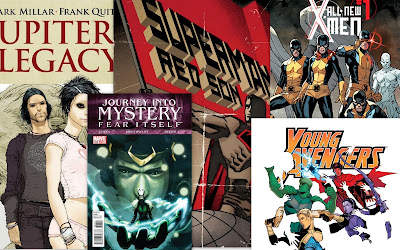 5. Running Comic Book Series- All New X-Men by Brian Michael Bendis- The original five X-men are pulled from their current timeline and thrusted into the future finding X-leader cyclops as a Mutant terrorist. There's a lot more going on here but, I wanna keep this brief. Overall it's a great comic, and one of my faves from the new Marvel NOW relaunch.

Young Avengers by Kieron Gillen - Another Marvel NOW success, this comic requires a little prior research before diving into. The new roster of YA includes teen Loki, and a Latina version of Ms. America. Gillen's magic here is taking note of youth culture and using it for comic relief. Case in point: Telling a part of the comic through the eyes of a Tumblr feed. Genius.


Jupiter's Legacy by Mark Millar- This comic is only two issues in, but I'm in love with it. Thus far it's the tale of a group of degenerate super powered children of already famed super heroes.Think Wonder Woman's daughter shooting coke in a bathroom. There's plenty of controversy here, but Miller does it all in great taste.

6. Summer Trade backs- Superman Red Sun by Mark Millar- So what if  Kal-el's (aka Clark Kent) space ship landed in the Soviet Union instead of Smallville, Kansas? Let's just say Supes is anything but truth, justice and the American way. This is a great spin on Superman and doesn't require prior canon reading.

Journey Into The Mystery: Fear Itself- Loki has been getting a lot of press these days from the Thor and Avengers franchise. But if you're a comic book snob and were privy to Loki before the films, this is the perfect read for you. Here we see Loki re-birthed as a child version of his prior self, still up to his mischievous ways, but this time for the good of Asgard and ultimately the Marvel universe. 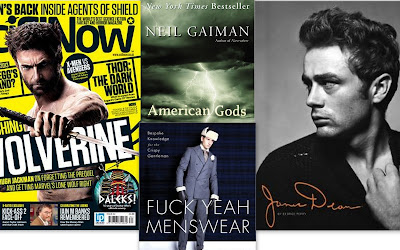 7. The Informative Read- James Dean by George Perry- Taking a look at the life of a legend, this is a great read if you're not into the fiction books. And if you're big on pictures, there's plenty in this book so you can swoon over Mr. Dean.

8. For the Sake of Fashion- Fuck Yeah Menswear: Bespoke Knowledge for the Crispy Gentleman by Kevin Burrows& Lawrence Schlossman - Everything you need to know about the world of menswear, including what the word "trill'" means.

9. Rainy Day/Heat Wave Reads- American Gods by Neil Gaiman- This is the perfect book to get lost in if you're trapped inside due to mother nature's wrath.  Gaiman does an amazing job of weaving the worlds of fantasy and reality together; taking mythic deities (Think Odin, and Anubis) and meshing them together with the modern world. A perfect book to get reacquainted to with if you've already read it.

10. Magazine of the Summer- Sci-Fi Now- This British mag happens to be one of my favorite magazines ever. No issue is ever the same, and it's the perfect culmination of pop culture and geek interest.This month's cover story features X-Men Origins:Wolverine, and while I may not be in love with the cover ($10 bucks  says that Wolverine's gonna suck...again), the mag still reigns supreme as the perfect summer editorial companion.