3 Vote
I’m back from vacation! And it was awesome…
I’m also over at the Insecure Writer’s Support Group with guest blogging tips. 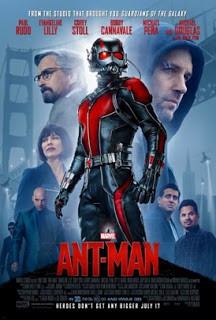 Ant-Man Review
I’m happy to say the state of the Marvel Universe is alive and well!
Ant-Man is a quirky superhero and the film could’ve gone many directions. (Most of them wrong.) But in very capable hands, it turned out to be a great time at the theater.
Paul Rudd is the lead with Michael Douglas guiding him into the role of Ant-Man. They both do a fine job with their characters.
The film is full of humor and many laugh out loud moments. Rudd brings the right amount of comedic behavior to his character, and some of the side characters have hilarious lines.
The special effects are great and they took full advantage of Ant-Man’s ability to change sizes. This also worked amazing in the action sequences.
Typical Marvel, you get two extra snippets at the end. So stay until the VERY end for the best one.
This film was the most fun I’ve had at the movies in a while and in my top three of the year.
Highly recommended!

Expendables 3 Review
I dig good action movies, but something about this series hadn’t clicked with me yet. The first one was ‘all right’ and the second one stretched even my ability to suspend disbelief. So I went into this one with low expectations.
And I have to say, I really enjoyed it. (Third time’s a charm I guess.) This one was more of what I thought the series should be like with all of those action stars. And it was a lot of fun.
To give you an idea of the cast – Sylvester Stallone, Jason Statham, Harrison Ford, Arnold Schwarzenegger, Mel Gibson (who plays the bad guy), Wesley Snipes, Dolph Lundgren, Antonio Banderas (as a really quirky character), Kelsey Grammer, and more.
Recommended as a NetFlix watch.

I’m still stunned Jurassic World is doing so well. I enjoyed it once, but it’s really not that good. Not $1.5 billion dollar good.
Minions has already soared ahead of Inside Out and will likely be the biggest animated film this year.
And while Fury Road deserves more than that, it was enough to green-light the sequel. Awesome! Bring on the bat-crap insanity. 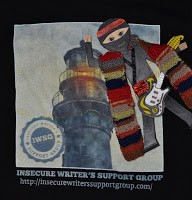 Mini-Alex
Mini-Alex would like to remind everyone to pick up their Insecure Writer’s Support Group t-shirt!

Designed by the very talented Jeremy Hawkins, it’s available at the NeatOShop.

(And sorry, Mini-Alex did not go on vacation with me, so no photos of him being carried off into the woods by bears.)

Reading Ambitions
I’m a slow reader, which really sucks as I have so many books I want to read, including those by blogger buddies. So my goal for the rest of the year is to get to at least one book by every one of you. I doubt I’ll make it, but I’d like to read at least ONE book by each of you. Yes, it will probably be the shortest one, but that’s better than none!

Wish I could teach my clones to read…

The State of Science Fiction Television Shows
This is something I’ve been thinking about for a while. 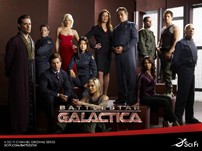 As I was recently watching an episode of Killjoys, I was left wondering what happened to the good science fiction shows of my younger years.

If I have to point the finger at one culprit, it appears the tipping point began with the latest incarnation of Battlestar Galactica. It was a show that featured a fractured team, full of backstabbing, deceit, and treachery.

And apparently this has become the template for current science fiction shows. From Stargate: Universe to Defiance, Dark Matter, and Killjoys. 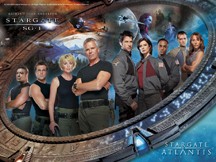 It’s sad this dark, nihilistic attitude has seeped in from real life and permeated our entertainment. What happened to optimistic science fiction shows? Like SG1 and Star Trek? Gone now are the days of likeable characters you could root for and teams who stuck together to solve problems.

I just hope that this attitude doesn’t creep into great franchises like the Marvel movies. If it does, I’ll just stop watching those as well.

What do you think about this shift in attitude and do you like it? Is it really a good message for people to hear - that there's no hope? What happened to the joy of watching and the fun?
Who else saw Ant-Man this past weekend? Willing to give Expendables 3 a shot? Do the box office figures surprise you? What are your reading ambitions for the rest of the year? And what do think about the nihilistic attitude of shows these days?
Don’t forget to visit the Insecure Writer’s Support Group!
And if I have new followers that I haven’t yet followed back in return, please leave a comment! The Google Friends Connect widget is being a pain and I can’t find blogs through it right now.