World War Z: Should You Take the High Road or the Low Road?

Brad Pitt's new zombie movie, World War Z, opened earlier this summer, and it was a bittersweet occasion for the many fans of the book that shares its title. Max Brooks' bloody brilliant 2006 novel is ostensibly the basis for this new film, but anyone following the movie's road to the big screen knows that the finished product bears no real resemblance to the novel. 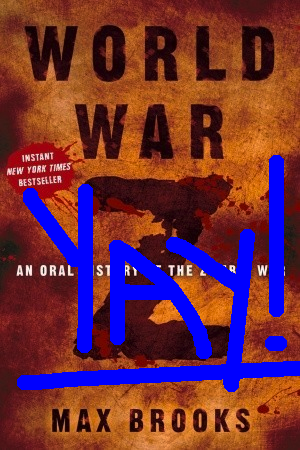 We're not talking "They took out Tom Bombadil!" or "Why is Shae saying she loves Tyrion when she was clearly in it for the money in the books?"-type changes. Those are small tweaks in Hollywood versions of novels that hew fairly closely overall to the original characters and storylines. But the WWZ book is written as oral history that tells a patchwork tale of the global fight against the zombie hordes a decade after the events took place. It doesn't have a main protagonist or location, instead hopscotching around the globe to give a deeply personal look at the moral, political, religious, economic and social repercussions of humanity's last desperate stand.

The WWZ movie takes the opposite approach: The ever-handsome Brad Pitt tries to save the world during the early days of the zombie crisis. The action on screen, while often tense and gripping, has very little overlap in characters, locations and story lines.

So as I see it, there are two approaches to take when it comes to World War Z. The first is to take the high road and behave like a grownup, acknowledging that the movie has nothing much to do with the book and accepting it as a separate and basically unrelated property to be judged on its own merits. The mature book fan won't get bogged down in bitterness at the missed opportunities and what might have been. 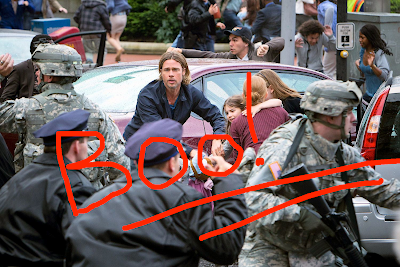 Then, there's the low road. The immature response would be to do a spite re-read of World War Z so you have even the most minute plot points lodged in your head when you go into the movie theater. Then, you can fidget and sigh and whisper harshly to your movie-going partner, "Why in the world are they choosing not to show the battle of Yonkers? Who in their right minds thinks that was a good decision for a tentpole summertime movie? The Yonkers battle in the book is AWESOME. WHAT is WRONG with HOLLYWOOD?"

The only silver lining I can find in all of this is that by leaving the novel's storylines basically untouched, in a few years some smart HBO exec can turn the book into a cable drama series that can showcase its vast and compelling narrative sprawl — the way it should've been from the very beginning.

What about you, dear readers? Did you see the movie? Did you do a spite re-read of the book? Did you behave yourself in the theater?

To read more of Sara's thoughts on zombies and books (but not zombies that read books, sadly), visit www.stellarfour.com.