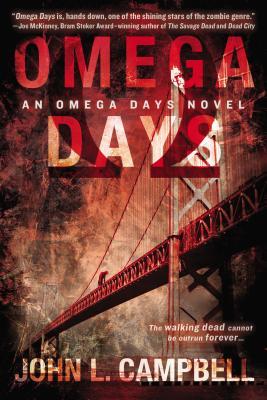 I just can’t resist zombies!  When I was offered a chance to review Omega Days, I didn’t have to know anything else about the book other than it was full of zombie goodness.  Originally self-pubbed as an ebook, Berkley is releasing it in paperback with expanded material from the author.  Though Omega Days clocks in at over 350 pages, I gobbled it up in two sittings.  I couldn’t put it down!  Well, I did read for a while before I went to bed, which gave me a few nightmares, but that’s why we read these horror novels, isn’t it?

The setup for John L Campbell’s zombie apocalypse isn’t much different from any other, but I liked most of the characters and didn’t want to see them go down under the snapped jaws of a ravenous corpse.  There are plenty of deaths, though, and that is one of the criticisms I have about the story.   After we are introduced to the main protagonists, there is a section of random character intros, and almost all of them are quickly made into zombie chow.  I don’t believe that section added much to the story, and the death of Baxter just pissed me off.  It seemed that the section was more for shock value than to move the story forward, and that is actually the spot that prompted me to close the cover for the night.  The action picks up again with the recurring characters right after, so I did breeze through the rest of the book without a break.

There are multiple protagonists, and the story unfolds through alternating POV chapters as they each have to deal with the new, frightening normal that includes walking corpses, relatives that try to bite your face off, and no safe haven.  It means having to learn to be quiet, to scavenge for vital supplies, and how to defend yourself when one of the walking dead catches you unawares.  But don’t think that the zombies are the only monsters here.  There are plenty of uninfected people who make the zombies look like teddy bears.  During the crisis, everyone’s true colors shine through, and there are quite a few with hearts and spirits as black as coal.

While I enjoy the zombie mayhem, it’s the survivors’ reactions to the situation that keeps me reading these books.  Let’s face it – it’s rare to find something completely new about a zombie story, so it’s the characters that carry my interest.  It’s a formula that works without too much tinkering; sure, the form of transmission may change, but there’s not much else that does.  The rate of transmission is staggering, the uninfected struggle to stay alive without modern conveniences, and their true selves begin to show.  Will they be willing to help others, despite the danger?  Are they out only for themselves?  Or do they have visions of megalomania, and start taking measures to take over what’s left of the world?  That’s why I read these time and again.  To see how the characters react and I take comfort that no matter how awful conditions become, a handful of people will survive.

By the end of Omega Days, there were characters I loved, and characters I hated.  There are actually two that I want the zombies to tackle to the ground, rip up, and rend to pieces, and I want this to happen now.  I was caught up in the action and the fear, and I’m looking forward to the next book in the series.  If you are a fan of zombie stories, this is right up your alley.

When the end came, it came quickly. No one knew where or exactly when the Omega Virus started, but soon it was everywhere. And when the ones spreading it can’t die, no one stands a chance of surviving.
San Francisco, California. Father Xavier Church has spent his life ministering to unfortunate souls, but he has never witnessed horror like this. After he forsakes his vows in the most heartrending of ways, he watches helplessly as a zombie nun takes a bite out of a fellow priest’s face…
University of California, Berkeley. Skye Dennison is moving into her college dorm for the first time, simultaneously excited to be leaving the nest and terrified to be on her own. When her mother and father are eaten alive in front of her, she realizes the terror has just begun…
Alameda, California. Angie West made millions off her family’s reality gun show on the History Channel. But after she is cornered by the swarming undead, her knowledge of heavy artillery is called into play like never before…
Within weeks, the world is overrun by the walking dead. Only the quick and the smart, the strong and the determined, will survive—for now.