A Case for the Yuuzhan Vong 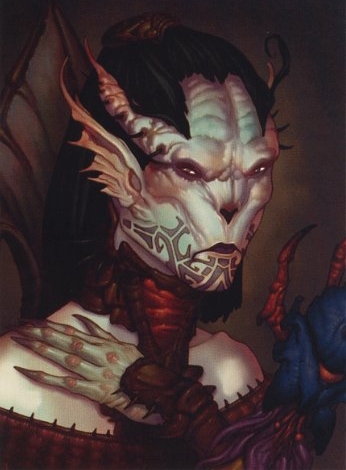 In 1941, the United States and Japan were at war. In 2013, the two are enamored with each other. Art and cultural ideas flow between the two countries far easier than they did in September 2, 1945, the last day of their conflict in World War II.

In the Star Wars universe, there are a lot of world-engulfing wars. One happens after another. Some events are bound to become irrelevant to the narrative along the way, but there’s one big event that has been forgotten more than I think it should: the Yuuzhan Vong war.

In the 19 books of the New Jedi Order, Luke Skywalker and company first fought the Yuuzhan Vong, and then showed the aliens that their reason for fighting was a lie. Their ruler was not a god. The new species had living weaponry and an elaborate mythology and caste system.


In the novel series after that, the Yuuzhan Vong were largely forgotten. There were no significant characters of that species in Legacy of the Force or Fate of the Jedi. They are mentioned in the Legacy: Ghosts comic series, set far after any of the books: in 41 ABY, the Jedi try to recast the Yuuzhan Vong as farmers and growers.

A group of them work on peacefully restoring planets that had been devastated during the war, but the Sith interfere and make the Yuuzhan Vong Shapers look complicit. Roan Fel used hatred for the Yuuzhan Vong to spur the creation of a new Empire. The fanatical Yuuzhaan Vong Zenoc Quah also appears, spurring more religious discussion.

Fans got a look at an orphaned Yuuzhan Vong child raised by humans in X-Wing: Mercy Kill. Viull Gorsat is separated from his culture twice over - he’s a Shamed One, who would have lived as untouchable in traditional Yuuzhan Vong society, and he was raised by human parents, who found him orphaned during the war. One of my favorite things about Mercy Kill was the lack of trust between Gorsat and Piggy, who had fought in the Yuuzhan Vong war. It showed the prejudice and complications that came from the meeting of two cultures, but ultimately, ended happily. Author Aaron Allston worked the implications of the Yuuzhan Vong war into the two characters’ relationship while also including elements unique to them personally.

Elements of the Yuuzhan Vong’s story also show up in material set chronologically earlier than the New Jedi Order, from Knights of the Old Republic to Rogue Planet to Darth Maul: Lockdown.

There’s little mention of them in the newer series like Fate of the Jedi, though. The sentient planet Zonama Sekot is likewise forgotten. Its living spaceships retracted. Its effects on galactic religions and theories of evolution are not discussed.

Part of the reason for this avoidance might be that no common enemy arose to give the Galactic Alliance (or the new Empire) a reason to ally with the Yuuzhan Vong. The Sith ignored them since they cannot feel the Force.

That avoidance is not necessarily a bad thing in terms of the EU narrative - there was a lot going on in Legacy of the Force and Fate of the Jedi as it is - but it could have been a different focus for the series.

I think there’s a lot of potential for including the Yuuzhan Vong in other Star Wars books. Even side characters could reveal a lot about racial attitudes and how the cultures are or are not integrating. It could continue to teach the lesson of forgiveness and redemption that started in the Original Trilogy. Alien characters bring different perspectives and abilities to the story. It also could answer, and raise, many questions. Are there student exchange programs? What is life like for a child who is Viull Gorsat’s age but has grown up within the Yuuzhan Vong culture? What are they doing out there on Zonama Sekot? Are others befriending humans and encountering resistance like in Mercy Kill? In what ways have the two cultures, once considered irreconcilable, become enamored of each other?