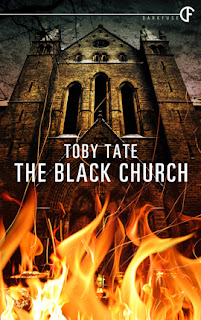 You know, sometimes horror really tries to do too much. There was a time when horror stories were simple . . . when they were fun and frightening . . . when they focused on actually being horrifying, rather than on trying to build some sort of thematic, allegorical commentary on the human condition. That's not to say a good horror story can't have a deeper meaning, just that I prefer it when that message doesn't get in the way of the chills.

Toby Tate smartly plays with that understanding in the early chapters of The Black Church, laying the foundations for what initially seems destined to be a tale of faith and redemption. I say initially, because there comes a point where you realize he's messing with you, that all the talk of God and faith is just a smokescreen. Clear away the smoke, stare into the flames, and you find an old-fashioned horror story that delivers thrills and chills in equal measure.

Take one cursed prayer rug, a family with a dark history, a series of unfortunate 'accidents', and a sort of serialized nightmare connecting them, and you've got a great little story. Tate just keeps piling on the horror, building a very effective psychological  thriller that is driven by some very dark, very supernatural forces. It's a fantastic read, right up to the twist sort of ending that you can't help but see coming, even if you can't believe he actually took it there. If I were to have one minor complaint it would be that the story races along too quickly, without giving us time to really get to know any of the characters. It feels like a short story where the body count forced it to outgrow the page count. In the end, though, I'd much rather have that adrenaline rush than a novel full of fluff and padding, so let's call that a comment rather than a complaint.

The contemporary story is very well told, with some real dread, and some real horror. The dream flashbacks are a nice touch, and really help to not only add some mystery, but provide a solid background for the supernatural element. All in all, a truly horrifying read.