Brenden Fletcher and Annie Wu put a new twist on the long-running fishnet-clad hero in Black Canary. Looked at after reading, it’s a terrific choice, but not one I would have ever expected.

Here, Black Canary is the name of a touring rock band. The blonde on the cover is D.D., a fighter with a mysterious past neither her bandmates nor we know anything about yet. It’s a great idea to give her some female compatriots, since she’s previously been a loner or defined through her relationship with Green Arrow (nowhere to be seen here, although there is a hint of a past marriage). And casting her as a singer ties into her vocal powers in a realistic fashion.

It’s confusing and mysterious and something I want to read more of. Wu’s art is edgy and scratchy, well-suited to the story of a scrappy road band playing grungy clubs. The images are allowed to tell the story on their own at key moments, a sign of confidence I liked. This feels really new and interesting. 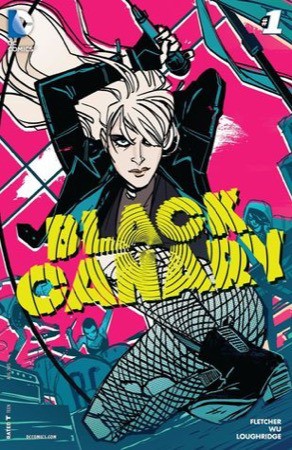