Fantasy Review: King of the Bastards by Keene & Shrewsbury 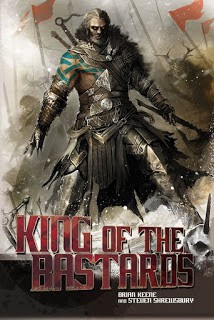 Although not quite as much fun as last year's The Lost Level, there's no doubt that King of the Bastards is firmly rooted in the same fondness for the pulp era of the early 20th century. Brian Keene & Steven L. Shrewsbury have crafted a tale that almost feels like an posthumous collaboration between Robert E. Howard, Fritz Leiber, and Michael Moorcock.

This is, for better and for worse, a complete throwback novella. It's pure pulp, full of clichés, and heavily dependent upon genre tropes. There's nothing truly original or progressive about it, but that's fine. You know what you're expecting when you pick it up, and that's precisely what you get.

Our hero, Rogan, is the self-proclaimed King of the Bastards. He is a sexist, racist, misogynistic Conan clone - but with an intriguing difference. Rogan is a barbarian past his prime, a man who has turned his back on the throne to adventure through his post-retirement years. He can still slay the monsters and seduce the ladies, but he tires a bit more quickly, and his patience isn't what it used to be. This is Rogan's story to tell, and it works largely because he does explore such an interesting (and entertaining) facet of the pulp hero.

Rogan and his nephew lead us from the depths of the sea, with its pirate crews and tentacled monsters; to the wilds of the jungle, with its savage natives and undead beasts; to the heights of the hazy mountain, with its sorceror gods and mutated giants. There's a bit of a sci-fi twist towards the end, but fans of the genre will likely spot it coming from miles away. All told, King of the Bastards is a fast-paced tale that doesn't attempt to do anything more than entertain, and which does so with pulpy goodness.