The hit Fox (non-)superhero show Gotham has been announced for release on Blu-ray and DVD on September 8.

Gotham was Fox’s highest rated fall drama debut in 14 years among the desirable adults aged 18-49 demographic. I have yet to watch an episode, but this package may remedy that for me, since I like behind-the-scenes info. The set includes 22 episodes plus these extras: 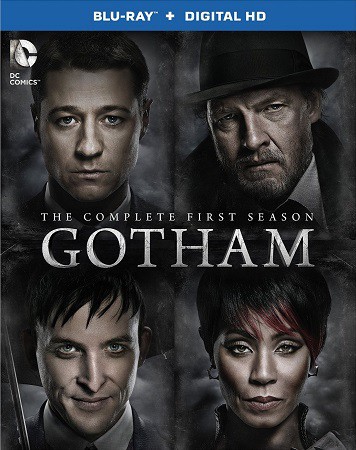 Interestingly, the list price between the two sets is minimal. The DVD version lists at $59.98, while the Blu-ray package is $60.10. That leads me to assume that the special features are included on both versions. However, since the DVD version is discounted 33% at Amazon right now while the Blu-ray is only discounted 25%, there’s a $5 difference between the end prices. Here’s the official series description:

Before there was Batman, there was Gotham City. Everyone knows the name of Commissioner Gordon, but what of his rise from rookie detective to Police Commissioner? What did it take to navigate the layers of corruption in Gotham City, the spawning ground of the world’s most iconic villains? Gotham tells the story of the world’s most iconic DC Comics super-villains and vigilantes from the very beginning, revealing an entirely new chapter that has never been told…. Although the crime drama follows Gordon’s turbulent and singular career, it also focuses on his unlikely friendship with the young Bruce Wayne — with his mentorship a crucial element in developing the mythology of Gotham City.

Now that we’ve seen the entire season, those of you who’ve watched it throughout, how did it hold up for you?