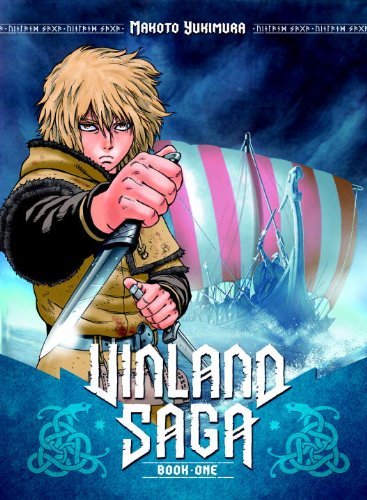 I have been interested in Vinland Saga since the license was announced for US publication.  When it came out, however, I balked at the sticker price.  $19.99 per volume!  Instead, I requested the first two books from the library, and once I received them, I understood the price point.  These are hardcovers, and they are 2 in 1 omnibus releases, clocking in at over 450 pages.  After sitting down with the first volume, I find the price completely reasonable; the end product is beautiful, the pages are nice, thick paper, and the binding is rock solid.  The translation rocks, too!  All in all, Vinland Saga Book One is worth every penny!

This series will appeal to fans of Berserk, A Bride’s Story, and Claymore.  The art is lush and breathtaking, with a realistic style.  The actions panels are incredibly rendered, and all of the action, bloodshed, and flying  body parts are easy to follow.  Every single illustration is highly detailed from the ships to the weapons, and if you like knowing exactly what the characters are feeling, you’re in good hands here.  Every nuanced emotion is clearly conveyed, from Thorfinn’s fierce determination to Thors’ reluctant reservation to put his people at risk in battle.

On the surface, Vinland Saga is an action tale about Vikings.  It’s also the story of a man’s love for his family, and the ruin it brings him, and the rage burning in a young boy’s heart.  After his father is murdered, Thorfinn vows vengeance for his death, and his every action from that moment is to make himself stronger so he can claim his revenge.  This is A Game of Thrones set on the cold seas, in little boats that are skillfully navigated from one battle to the next.  The politics are brutal, the sakes are high, and dying a warrior’s death, on the field of battle, bathed in the blood of your enemies, is the name of the game.

Book one sets the groundwork for Thorfinn’s quest for revenge.  He’s six when he witnesses the treachery of men without honor, and it changes him forever.  Raised by a kind and just man, he learns that his father was a Jomsviking deserter.   Thorfinn enjoyed a carefree childhood, but after he learns the truth about his father, he wants nothing more than to be a fierce warrior, too.  Little does he know that he will get his wish, only with consequences far greater than he could have ever anticipated.  When we first meet him, he is surly and belligerent.  He is also a killing machine, who fearlessly leaps (literally) into battle with his twin blades flying.  He must earn his duels with Askeladd, the man responsible for his father’s death, by completing missions during the Viking clan’s frays.

I loved this book, and I’m excited to discover new manga series because of it.  I haven’t been reading many graphic novels lately because I am burned out on the episodic publishing schedule (especially when I am invested in a series and it gets CANCELED!), but this series is presented in a nicely sized chunk so that didn’t bother me so much.  Now I want to start catching up on some the series that I have allowed myself to fall behind in, and I can hardly wait to read more Vinland Saga!

The Viking invasion of London has reached a fever pitch, and Askeladd and Thorfinn rush to take part in the carnage! Their goal is the capture of Cnut, the son of King Sweyn Forkbeard and heir to the throne of Scandanavia and the Danelaw. But standing in their way is Thorkell, one of the Viking world’s most daring warriors. The defeat of a living legend will be a formidable test of Askeladd’s cunning and Thorfinn’s ruthlessness, and of their ability to set aside personal grudges and fell a common enemy!