When a friend recommended the Phoebe and Her Unicorn comic strip (formerly known as Heavenly Nostrils) to me, she described it as a more modern, girl-centered Calvin and Hobbes. She was right.

Phoebe and Her Unicorn by Dana Simpson is the first collection of the strips. Phoebe is playing near a pond in the woods when she skips a stone that hits Marigold Heavenly Nostrils, a unicorn. Marigold is so beautiful (at least, in her own mind) that she was transfixed by her reflection, so Phoebe gets a wish granted to her in return for freeing Marigold. Early on, Phoebe’s snark becomes apparent, but her wisecracks hide uncertainty. So Phoebe wishes for Marigold to become her best friend.

Simpson’s got a terrific voice for the nine-year-old, not too wise, and every so often, base and selfish. The visual contrast between the two — Marigold’s sleek, flowing lines vs. the stubby, freckled Phoebe — blends surprisingly well as the two ignore the border between fantasy and everyday life. Impressively, the introduction is by Peter S. Beagle, whose Last Unicorn influenced the character and look of Marigold. 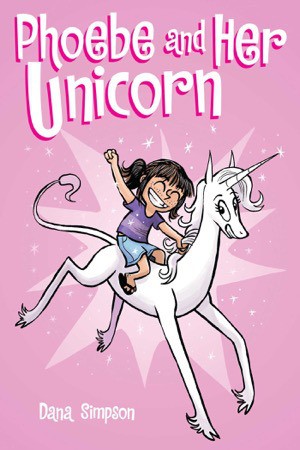 Much of the first book are the two spending time together, whether pretending to be detectives or playing Pastel Unicorns (with pony-like dolls) or enjoying the summer or arguing about what to be for Halloween. Marigold also comes to dinner with Phoebe’s parents and tries to help Phoebe with piano lessons.

There are other kids, too, most noticeably Dakota, the popular girl at school, who manages to make it past the unicorn’s protective camouflage Shield of Boringness. Later, she throws herself a birthday party. When school begins again, Phoebe is partnered with Max, a young nerd-to-be.

Particularly entertaining are when Phoebe and Marigold try to do something normal for best friends, like have a slumber party. At the start, they’re following expectations as to what one does at such an event, but then their unique personalities start emerging. And a unicorn is particularly bad at pillow fighting.

Every so often, Marigold can do something unexpected for purpose of plot or humor, and when asked how, her answer is simply “Unicorn.” in a fancy font. It’s a modern approach, but it’s also a reminder of the imagination and magic behind these everyday moments. Marigold’s arrogance, sarcasm, and literalism keep this from being too sweet or idealized. And yet, there are touching moments that draw from real emotion and occasional bits of inspiring philosophy. I liked reading this a lot. It’s clever and funny. (The publisher provided a review copy.)