First off a few comics from this week that may have slipped by you among all the hype... 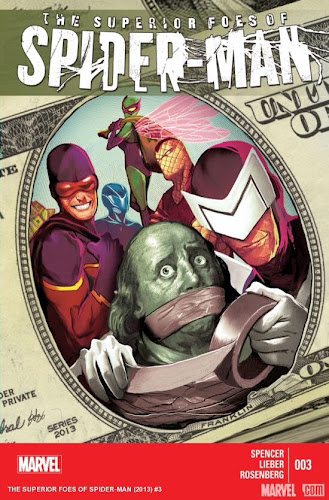 Ok, yes. Last week I posted a good bit about the Superior Foes of Spider-Man by Spencer and Lieber and here I am posting again about this book about third stringer super villains and this book delivered the fun again this week. Its not the kind of book that you can just fall into one issue of since this one references events from both the previous ones and does so subtlety so I think this one will read as an excellent collection once it comes out. This time around we get a lot of play between out title character Boomerang and his new parol officer introduced at the end of last issue and there is a bit of backstabbing that goes on all throughout. The story really evolves around the interpersonal problems between these all too human characters.

One of the real fun things about this book comes when you pay full attention to everything going on in the panels, there is a story going on being told through the smaller icon only word bubbles and though some are just defining the background characters I think its a great way to move the story along. No really its a good time.... 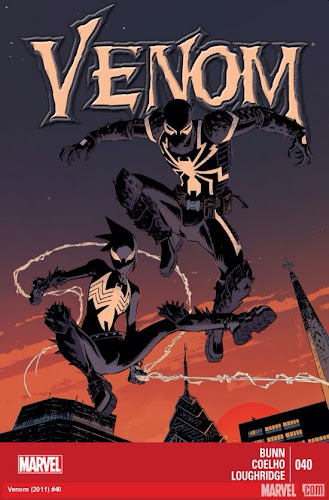 Oh look this may just be a theme like from A Christmas Story; here is another book I mentioned real recently. I would say if your a Marvel Unlimited member this is a book that you should definitely be reading. Cullen Bunn is moving this story towards a conclusion soon bringing in elements that have been lingering in the story since the Remender run including Damien Hellstorm who its seems people are gunning for... well actually skinning. He also reveals the why's of The speed with which Mania has become bonded to her symbiot. Also to give some of you a taste if you have yet to read Venom starring Flash Thompson check out the Marvel Unlimited app - there is an issue from a couple months ago up there for free and its a very good insight into the new Flash and the growth in his character. 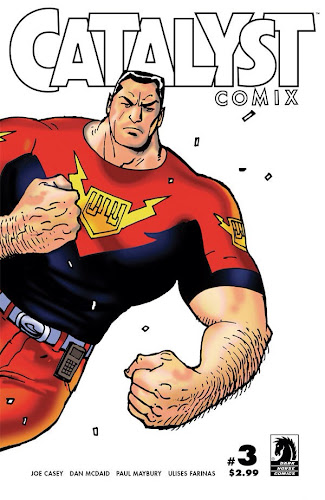 Lastly this week I'll point out Catalyst Comics from Dark Horse again. This is an anthology of stories in the Dark Horse super hero universe in which Ghost and X are lead characters. This one stars in its lead tale another take on the flying super strong handsome hero and asks some questions that really need to be asked about where the real villains in the world are and why the spandex crowd kinda does nothing about them. The follow up stories do new and different things with superheroes too. I like this book and think Joe Casey who's been doing new and interesting thing with the genre since leaving the big too is doing something that needs a much bigger audience. Lacking the meddling of editorial shackles this books takes chances others might not be able to.

This last week there were a couple of big things that happened and both related to issues caused by DC editorial decisions and both in my opinion were a sign of an attitude I do not like at all. Because of editorial demands for changes and a roadblock put in the way of a lesbian marriage between Batwoman and her long time girlfriend Maggie Sawyer co writers JH Williams and W Haden Blackman both have decided to leave the title as of issue 26 (god knows what issue number it really is because of the Forever Evil thing et al marketing BS). I read several reasons as to why they decided that including the idea that marriage ages characters which is questionable that the editorial stated audience is 40 something men at some con this summer. I for one feel that alienating creative teams is pretty bad for a struggling industry especially when the title is so well recieved.

(Let me make this absolutely clear I have nothing against the new announced writer Marc Andreyko and would love to check out his work but will have to look elsewhere since buying Batwoman now is the half the poster child for editorially driven storytelling that I personally disagree with.... Check this link for more reasons via Dan Dido... http://comicsbeat.com/mark-andreyko-taking-over-batwoman/)

The other editorial piece of strangeness and misogyny relates to the new Harley Quinn ongoing series. If you have not read about that well here is the skinny; DC ran an artist search allowing new unknown artists to try out to draw part of the book, all pages of which become property of DC winning or not (corporate creepy much?), but it gets better in in that one page is images of poor disturbed Harley committing suicide in increasingly silly ways including a planet showing her naked in the midst of the attempt. I don't know your mileage and morals may differ but that just seems in all bloody kinds of bad taste. This comes on top of the extra sexification of Catwoman in the new DC and the travesty that they did to Starfire. I don't know about anyone else this seems to be misogynistic and in absolute as bad a taste as the dead girlfriend I the refrigerator thing. I don't mention DC much here and there is a reason... I could name the titles I liked and I think you'll see some similarities in their fate... Frankenstein Agent of SHADE, Demon Knights, and Dial H... I'm pretty sure that Grant Morrison's Doom Patrol would not survive given where it fit thematically and story wise. So, I do not like saying negative things but these events well they leave me wondering about the general direction of one of the big two