The Making of 'The Abyss'

By A Space Blogyssey 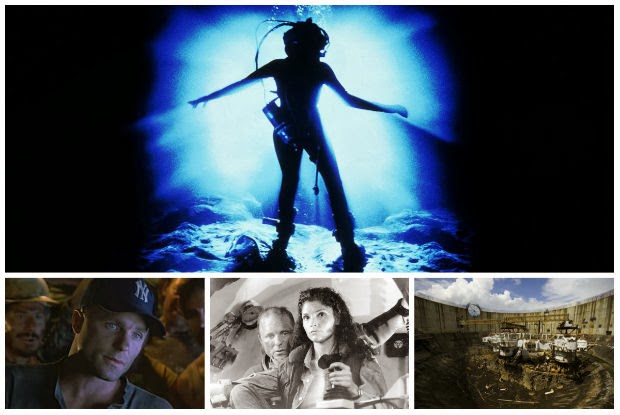 James Cameron's 1989 film, 'The Abyss' has "widely been regarded as the toughest film to shoot in movie history." When I read that, I remember thinking to myself, "really?" 'The Abyss' was a good science fiction movie, but it's not one of my favorite SciFi films. It's not even one of my favorite Cameron films, that honor goes to the original 'Terminator.' But then I remembered Steven Spielberg and the making of 'Jaws.' In 2011, Spielberg said that 'Jaws' was the most difficult film he ever made...and Spielberg has made a lot of films. So if filming a movie on the water is difficult, how much more difficult would it be to make a film entirely under water? Evidently, it's pretty darn hard.

After watching 'Under Pressure: Making of the Abyss,' I am thoroughly convinced that making a film anywhere near water is painstakingly difficult. Before filming began, all of the cast and crew of 'The Abyss' were required to become certified divers. Most of the stunts in the film were not performed by stunt people, but by the actors themselves. When Bud (Harris) brings a seemingly "dead" Lindsey (Mastrantonio) back to the rig, that's really Mastrantonio holding her breath (with rescue divers standing by of course). There was one memorable scene when a lifeless body in the crashed submarine has a crab come out of its mouth. Well, that "lifeless" body was actually Cameron's younger brother, holding his breath with his mouth open, while a crab crawled around in his mouth!
'The Abyss' was so difficult to shoot that Ed Harris almost died on the set and Mary Elizabeth Mastrantonio had an emotional breakdown during a particularly grueling scene. The actors in 'The Abyss' spent at least 11 to 12 hours each day on set, 40 feet underwater in an abandoned nuclear reactor in South Carolina. The crew were even deeper. The crew routinely spent so much time under 50 feet of water that they frequently had to decompress. Cameron would watch dailies in the decompression chamber. In order to save time between takes, cast and crew were told to relieve themselves in their wetsuits. Needless to say the algae bloomed, which required lots of chlorine. Harris' hair turned white. The cast and crew members coined several nicknames of the film, "The Abuse," "Son of Abyss," "Life's Abyss and Then You Dive."


Excluding the documentary, Harris has publicly refused to comment about his experiences during 'The Abyss.'

Mastrantonio has been quoted as saying,

"The Abyss was a lot of things. Fun to make was not one of them."

Michael Biehn complained that he only had three to four weeks of screen work, but spent five months on the set. Biehn remembered shooting an underwater scene when,

"... suddenly the lights went out. It was so black I couldn't see my hand. I couldn't surface. I realized I might not get out of there."

Cameron himself said that,

"...he knew this was going to be a hard shoot, but even I had no idea just how hard. I don't ever want to go through this again."

It didn't help that Cameron wasn't incredibly sympathetic to the actors. In response to the actors complaints Cameron said,

"For every hour they spent trying to figure out what magazine to read, we spent an hour at the bottom of the tank breathing compressed air."

In all fairness to Cameron, another actor Leo Burmester, who played Catfish De Vires or Cat, defended Cameron saying,

"Shooting 'The Abyss' has been the hardest thing I've ever done. Jim Cameron is the type of director who pushes you to the edge, but he doesn't make you do anything he wouldn't do himself."

So if someone says that filmmaking isn't all that hard and the actors are never in any danger, they clearly have never worked on 'The Abyss.' You can see photos of the abandoned set here  or look inside the set here. The sets were demolished in 2007.

Despite the production problems and the discord, it's hard not to be impressed with the work that went into making this film. Cameron is a brilliant filmmaker. Most of Cameron's films are technical marvels and 'The Abyss' is no exception. Cameron has been a maverick in the use of computer generated imagery (CGI). Cameron created 'The Abyss' in 1989 and for its time, the effects were cutting edge and still stand the test of time. In CGI terms, 1989 was a long time ago. Cameron's 1989 CGI is still better than some films I've seen in the 2000s. Does anyone remember the 'Catwoman' jewelry heist scene when Catworman is bouncing off the walls. Yeah that was bad. 'The Abyss' director's cut is actually much better than what was released in theaters. The director's cut makes sense of the terrestrial aliens and their involvement with the crew of the deep water rig named Deepcore II.

"All I know is that the 'Goonies' are good enough, but that doesn't help me here." Blogging since 2008.