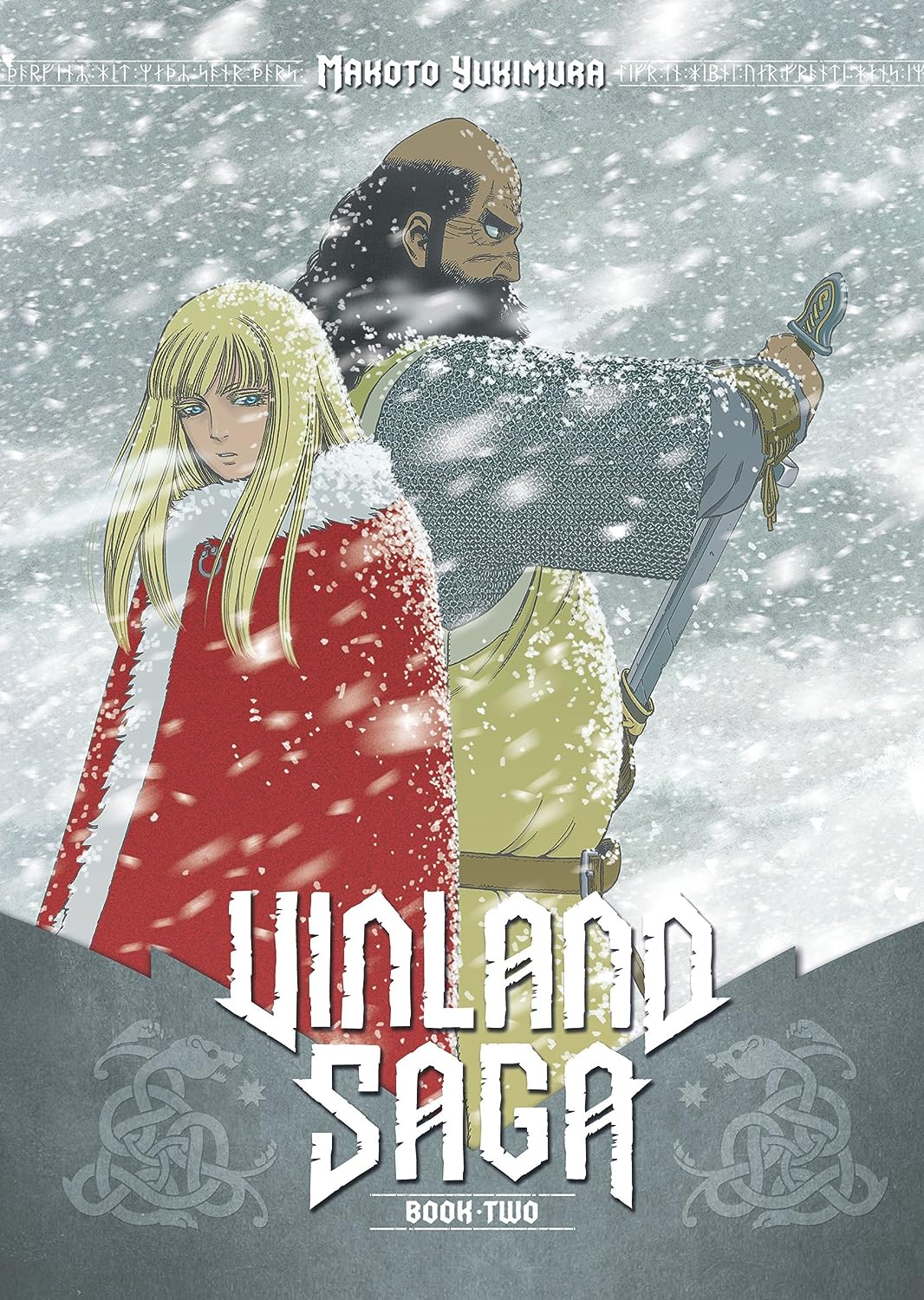 Wowzers!  Akseladd is just a prick!  Just when I start liking the guy, he goes and does something so cold-blooded and heartless that I have to immediately dislike him again.  He’s cunning, crafty, and greedy, and he wants to maximize profits for his warriors, even at the expense of what would be considered his allies.  Start a raging forest fire to smoke out the kidnapped Prince Canute?  Not a problem.  Strike down other rescuers so that he can keep all of the reward money for himself?  Certainly not a problem!  This is one guy that you don’t want on your bad side.  Or anywhere near you at all, especially if he or any of his men have projectile weapons!

While  I love the action, and there is plenty of that, I also find the historical details fascinating.  I don’t know much about Vikings, or Medieval Europe for that matter, but Makoto Yukimura is sprinkling the text with interesting facts about the time period.  It’s a chaotic time, with constant conflict between the European groups of the day.  Everyone wants a piece of the pie, and they will do anything to get it.  Murder, pillage, mayhem – it’s the coin of the times.  Trusting anyone seems like a very dangerous proposition, as many of the characters have found out, much to their dismay.  Askeladd’s betrayal of Thors has twisted and reshaped Thorfinn into a killing machine with one goal – to kill the man who killed his father.  I keep wondering what kind of a man Thorfinn would have grown into if he hadn’t stowed away on his father’s boat.  Would he be so consumed by hatred, if he hadn’t witnessed his death?

The main story arc for this volume centered around the rescue of Canute, the teenaged son of Sweyn, Kind of Denmark.  He’s been captured by Thorkell, a Dane who has chosen to help defend London against the Vikings threatening to overwhelm it.  He comes across as sort of a simple guy, whose first love is fighting and testing his strength against other warriors.  Thorfinn has brief, violent run-in with him. He manages to escape from the larger man, and gains some respect from him at the same time, all while proving that he has a lot to learn when it comes to making friends.  Everybody hates Thorfinn, but who can blame them? He acts like a sullen little prick, and seeing the interaction between him and Canute is like watching two different species trying to communicate.  So, while he excels at slaughter, he really needs to work on his people skills.

After two volumes, I am totally hooked on Vinland Saga.  I love the history, the action, and the sheer brutality of the characters.  It’s probably a good thing these Vikings don’t pack mirrors in their gear; I don’t understand how they could stand to look at themselves and not feel one shred of remorse for their behavior.  Then again, in a time when it’s kill or be killed, they all fit right in.

Volume 3 comes out April 29, and I can hardly wait!

ENGLAND AT WAR The foolish King Ethelred has fled, and Askeladd’s band is one of hundreds plundering the English countryside. Yet victory brings no peace to the elderly Danish King Sweyn, who worries that his untested, sensitive son Canute will never be ready to take the throne. The king’s attempt to force his son to become a man places the young prince within the grasp of the gleeful killer Thorkell! Whoever holds Canute holds the key to the thrones of England and Denmark – and Askeladd has his own reasons for joining the fray! “With its rich visual details, emotional pull and strong characters, this historical epic is an instant winner.” – Anime News Network Winner of the Japan Media Arts Awards Grand Prize for Manga and the Kodansha Manga Award From the acclaimed author of Planetes